I’ve had a number of requests lately for an update and pics of all the Pyrs, and was actually working on a post about them before all the other hubbub broke out. Coco has stationed herself in the barn for the summer. 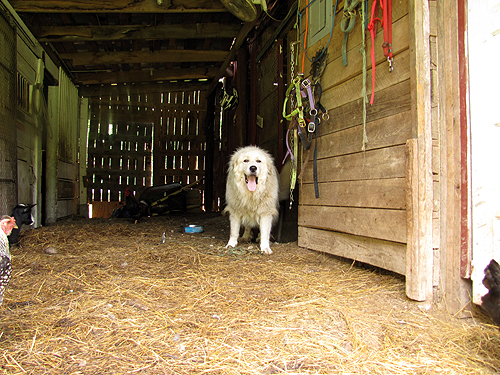 Coco is my oldest Pyr. She’s five this year. This is still a young Pyr, but the Giant Puppy is no pup anymore. She is huge. And hot. And enjoys the big, cool barn. And, well… 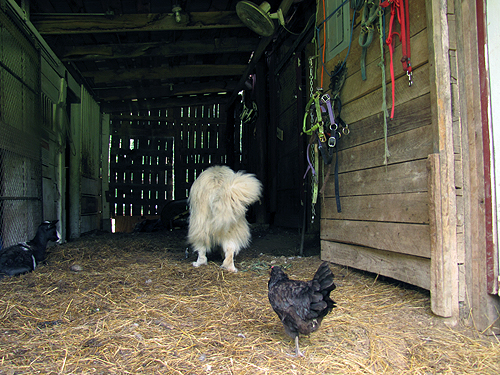 …I’m pretty sure she has a secondary motivation. 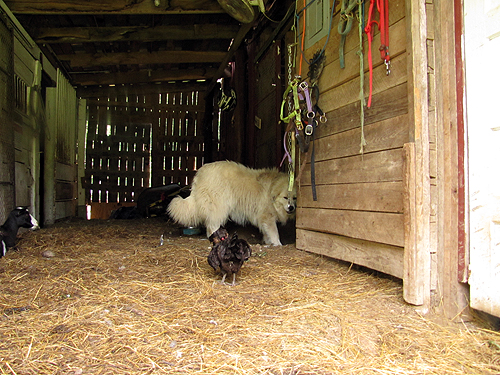 Giant Puppy: “I can fit under there….in my mind!”

The chickens lay eggs in the tack room. They scoot under the door. And Coco expends a great deal of mental energy scooting herself under there, too, in her imagination. She loves a fresh egg.

Since she enjoys the barn, and since I do have some of the goats in the front barn yard, I’ve been letting her stay in the barn, for now. Usually, I have Coco and Chloe together. Right now, I have Chloe in the goat yard and sheep field. I’m having a problem with her escaping there, and have made repeat attempts to correct the problem but haven’t nailed it yet. (Someone commented that I needed to work on my fencing. I have done nothing but work on the fencing on this farm since I moved here and have spent a substantial amount of money and time working on the fencing. On a farm, fencing work is a never-ending job, and is never perfect. I try. Right now, I think I need to bring in some help, but will have to wait until my hired man is available.)

Meanwhile, while Casper and Gwennie are generally my house dogs, Chloe occasionally joins them when she finds her latest way out. Gwennie is the alpha Pyr at the house, by the way, while Coco is the alpha Pyr in the field. Chloe easily fits in anywhere. As does Casper, who just likes to have friends, and while he’s a follower, not a leader, he can also be an instigator–at least in silliness.

I’ve been walking/running five miles a day on the ridge road out behind my farm. 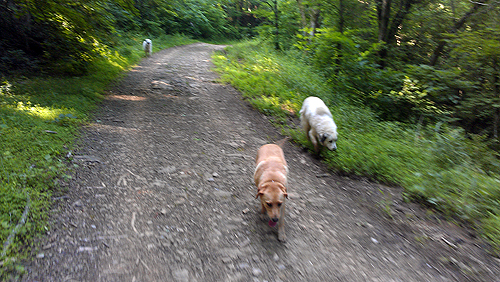 It’s remote, and I take the dogs with me. There are no people, no farms, not even any cabins. It’s a great place to walk/run, but remote enough that I like having dogs with me. They are great at staying with me, and I stop before I reach the other end, where there are farms, and turn around. It’s 2 1/2 miles there and 2 1/2 miles back.

Casper, stopping for some silliness along the way. 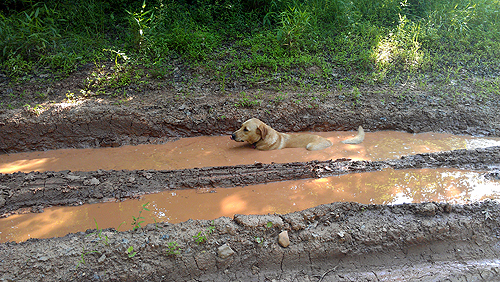 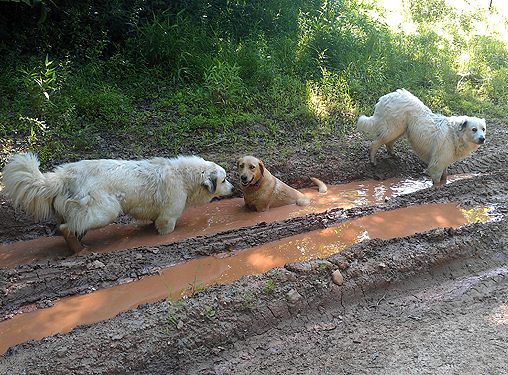 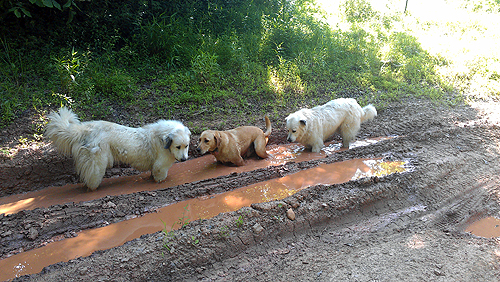 And his job is done! 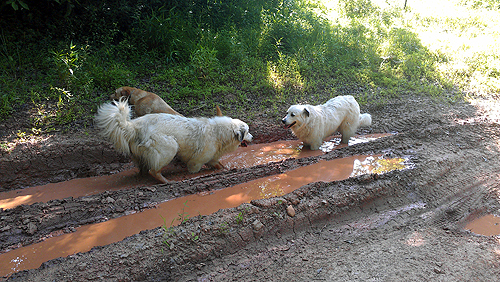 While Pyrs are sometimes these days kept as family dogs, they are, in fact, bred as working dogs and are happiest if they have a job. They are fearless, confident, strong-willed dogs with the instincts to think and act independently in the field without human direction. With people and the livestock they protect, they are patient, affectionate, and gentle. But in the field, they are quite territorial and bred to make decisions on their own. Pyrs do most of their work by warding off wild animals–they instinctively position themselves at the perimeters of their fields, gazing out into the land beyond their fences, barking. And barking. And barking. (Which is why people who choose them as family dogs often end up deciding they made the wrong choice. They will act this way in a home just as they will in the field.)

Typical joke about a Great Pyrenees:

Update on Coco: Over a year later, she is doing great, far better than her prognosis after her injury. She still walks with a slight limp, but she can run and functions normally. If she runs around a lot, or plays a lot, her limp will become more pronounced. But overall, considering we could have lost her, she’s doing fantastic.