First, I have to separate baby Gingersnap from mommy. 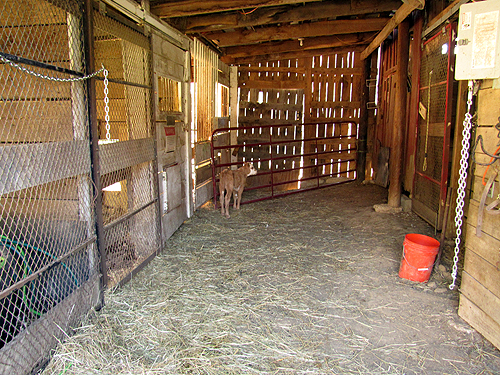 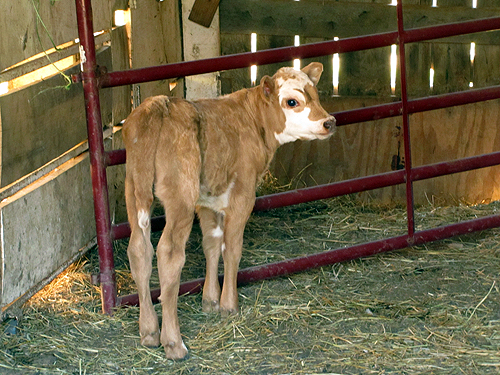 Moon Pie thinks she has a babysitter, so she goes out shopping. 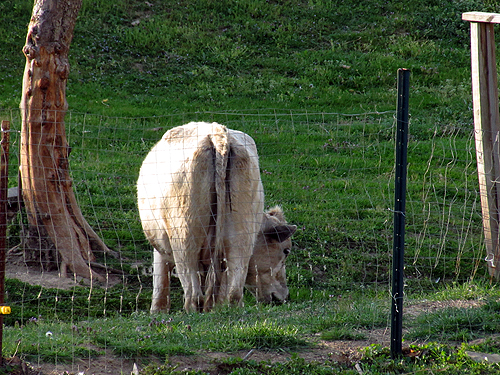 And everything is fine for a while, until she realizes THE DINGO STOLE HER BABY and she has to stand in front of the barn and moo and bawl until morning. 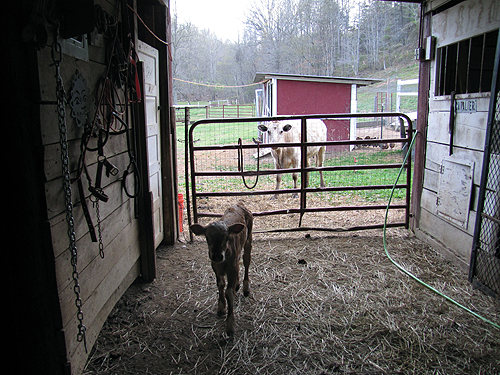 Then baby Gingersnap has to move to a temporary confinement so mommy can come into the alleyway on her way to the milking parlor. 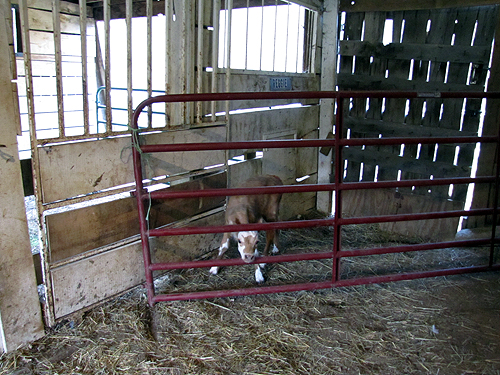 This is Moon Pie’s first calf, so she hasn’t been milked before. I hadn’t been planning to milk Moon Pie, but neither one of the “real” milk cows has calved yet, so Moon Pie has to step up to the plate. If I’d been planning to milk her, I would have started training her before she even calved. 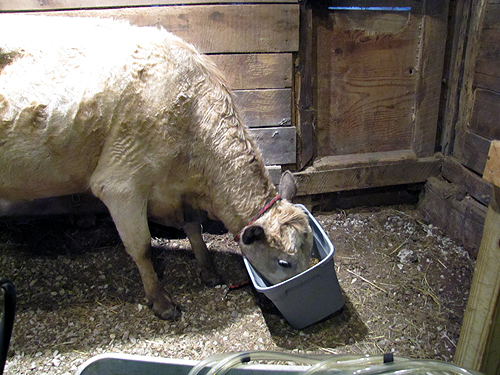 It takes me a while to convince Moon Pie to walk into the milking parlor. I’ve just started training her this week, so it’s still new to her. She doesn’t want to walk through the doorway into the milking parlor. I walk around and around her. I put on a lead on her. I push her and shove her and pat her on the bottom and beg a little bit. Then I yell head ’em up, move ’em up, hyah! and she finally walks in there and eats a bit of food I left for her inside the parlor, just far enough in that I can get in behind her and shut the door. I whip the food away from her and talk her into going into the stand and slam down her headlock. 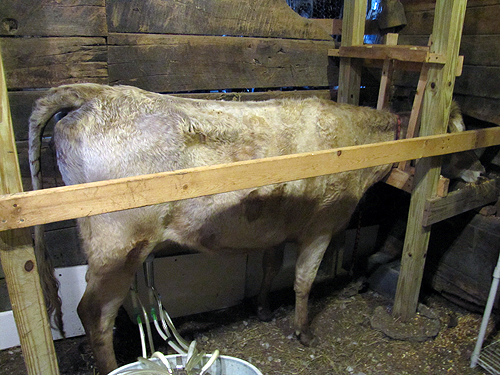 I’m only milking three quarters, to leave some milk for the calf. Moon Pie bucks and bounces around. She doesn’t really want to be there. 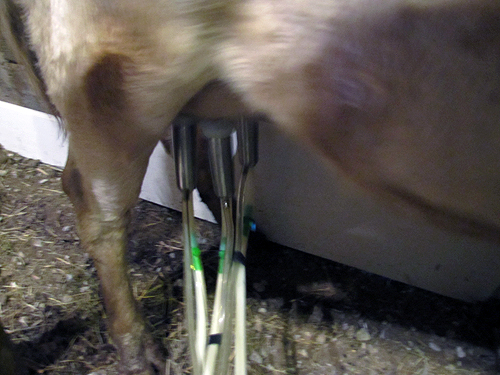 Before I release her, I let the calf go. The calf gets all confused and wanders off to the barnyard looking for mommy. (Walking right past the open milking parlor door where mommy is!) 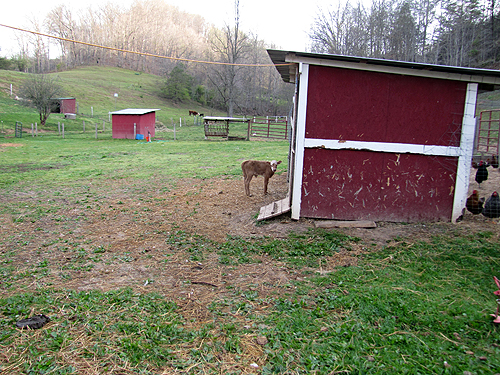 Gingersnap: “Did mommy go into the chicken house? Why?”

Meanwhile, I release Moon Pie and she goes back to the last place she saw Gingersnap to look for her, and gets all confused when she can’t find her.

Valentina and Aranel discuss how glad they are that they’re not cows. (Aranel is looking like a wide spot in the road, isn’t she? She’s due in May.) 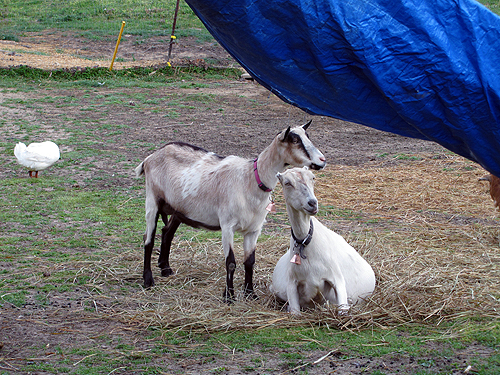 I finally get Moon Pie to see her calf. 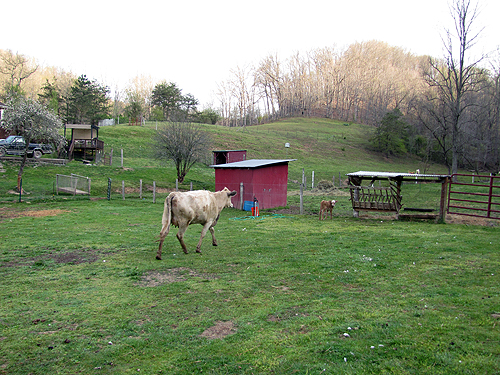 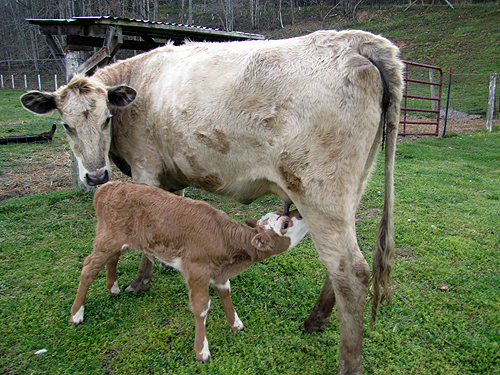 The world is right again. 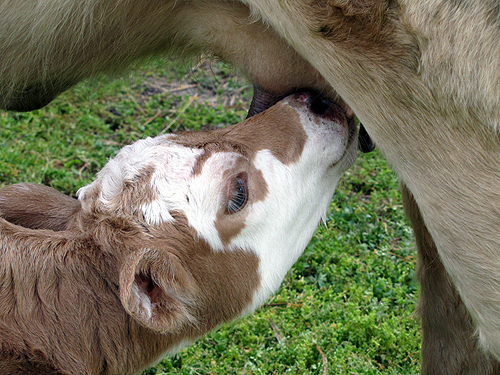 Then I milk Valentina. 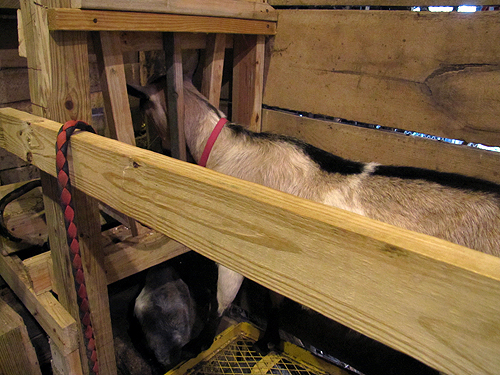 That’s Cherry hiding up under the food tray in the stand. 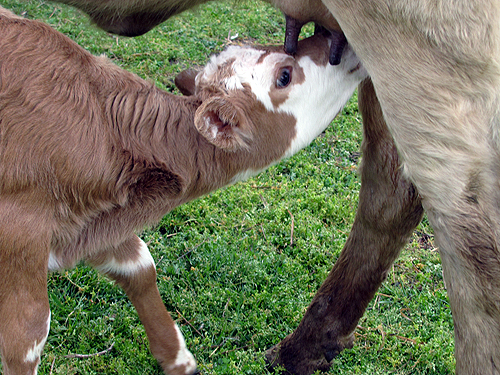 I’m pretty sure that’ll make the two of them real happy!