I have eleven chickens living in my house. 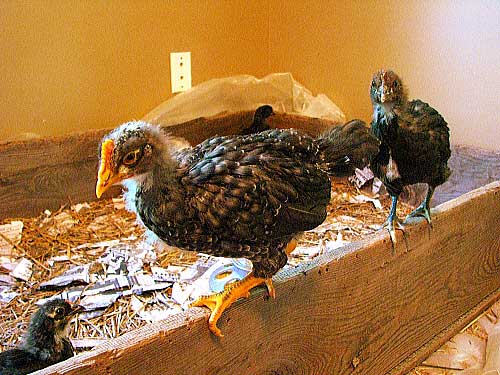 If you had told me a few years ago that I would have eleven chickens living in my house, I would not have believed it. I can assure you that at no time during the course of my childhood did chickens live in our house or even near it. My only experience with chickens was when I visited my grandmother on my mother’s side. She lived in a small town in Oklahoma (Frederick), but she had lived most of her life on a farm on the dusty Plains not far outside Frederick, where my mother grew up. My mother, like my father who could not get out of the West Virginia hollers fast enough, could barely wait to shake off the rural dustbowl of her childhood. (They certainly had something in common when they got married!) They went off to live ever after and raise their children in clean-cut, luxurious suburbia outside large cities from D.C. to Los Angeles to Dallas/Fort Worth, happily eschewing their country hardships and salt-cured hams.

But like my father took me to visit his West Virginia roots, my mother took me to Oklahoma. The fact that once I was at that turning point in my life where I chose to come to West Virginia, I chose it over Oklahoma, might have something to do with the flat, dusty, wide-open nothingness of those Oklahoma Plains, but I was just as baffled by life there as I was sometimes by what I saw when we visited West Virginia. My grandmother in Frederick lived in an old, tiny house, but she had a big screened-in back porch where she kept a bed. As in, a real bed, with a mattress and everything. If this wasn’t enough to blow my little suburban mind in which beds did not invade the perfectly manicured back patios (nothing but a barbeque dare do that), she had chickens.

And sometimes, in the afternoon, she would go outside and get dinner. I peered outside the windows of her little tiny house and could not believe what she did to those chickens.

She didn’t name them or treat them as pets or let them live in her house. Unless living in her house included their after-life in her frying pan.

I was always a little bit scared of my Oklahoma grandmother. She had some cajones I had no ability to grasp.

She also made me hand-sewn doll babies and she called me “Sue-Anne” (because she couldn’t pronounce that bizarre Frenchified “Suzanne” that my so-citified mother named me) and she always told me that I had pretty legs. My Oklahoma grandmother was upfront that way. She said whatever she was thinking, even if it was weird. I figure life on the farm in the dusty Plains where you could be blown away by a tornado any moment was pretty plain that way.

I guess I’ll never be as tough as either my Oklahoma grandmother or my West Virginia one–because I’m sure she broke some chicken necks in her day, too. But like my chicken lady who gave me my eggs said to me, “Once I’ve held them, petted them, listened to them sing to me, I can’t eat them.”

Me, I’m having a hard time just letting them go outside. They’re roosting in my office and sometimes I think they are plotting a coup and planning a remake of Alfred Hitchcock’s The Birds. But it’s time. I need to send my babies to kindergarten, or at least the chicken house. 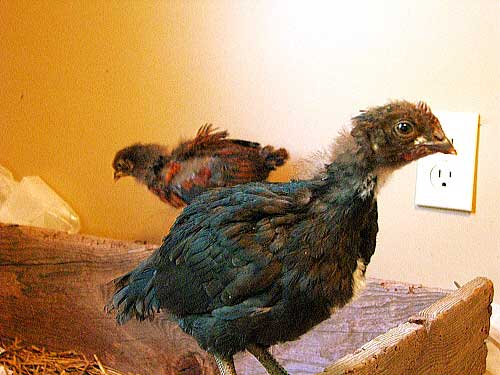