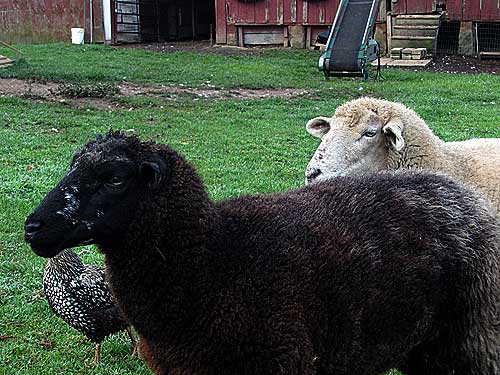 Since the incident, I’ve spent a lot of time considering my future in sheep. I’ve had sheep for several years now and know the ups and downs. At one point, lambs and all, we had a high of a dozen sheep at Stringtown Rising. We didn’t have enough pasture for that many (or hardly any) sheep. Sheep require a lot of pasture. Before moving to Sassafras Farm, I took the sheep flock down to one young ram and three ewes, and that is close to the max number I would want to keep here. I had thought of adding one more ewe, but that’s it. All lambs would be sold or butchered. Cute as they are, I like lamb meat, and since I wouldn’t be keeping lambs anyway, might as well keep one for me. Growing my own meat is part of creating a self-sustainable life.

I’ve also always been interested in the wool. In the past, I’ve sold raw wool, which isn’t worth much. This year, for the first time, I sent wool to be processed. Skirting raw wool and turning it into roving and eventually spinning it into yarn is a very time-consuming process. I’ve tried my hand at it and know roughly how to do it. Spinning is a true skill, not something you can pick up and put down at random will and expect to be proficient. I made a decision some time back that it wasn’t something to which I could commit the time required. It is, however, quite expensive to have done. Whether it’s worth it or not is not something I’ve decided yet. I haven’t even been able to commit to selling the yarn I had processed.

Partly because in order to make my money back and even a small margin of profit, I’d have to sell this Cotswold/Jacob wool for $40/skein. And who is going to pay that? 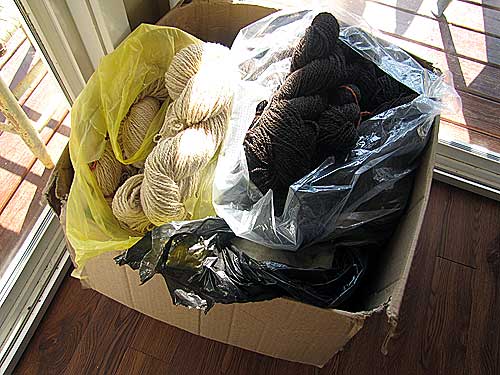 This dark wool is Crazy and Crazy Junior’s. 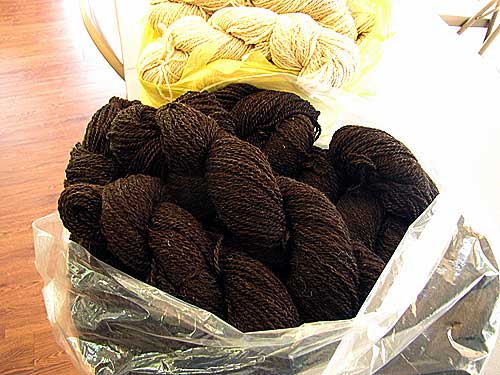 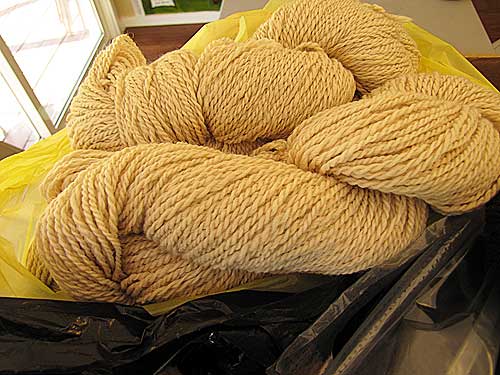 I had Annabelle’s wool made into batting. 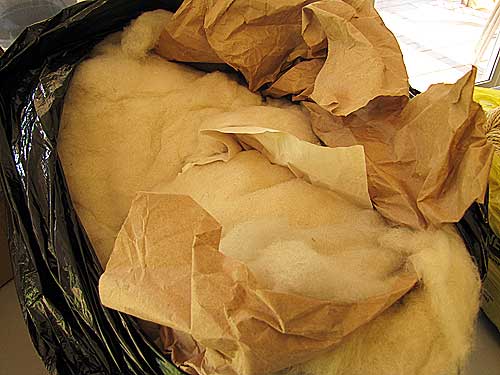 My sheep were “fired” from the place where their wool was processed because there were a lot of burrs in their wool. I’m pretty sure the burrs came from Stringtown Rising, not here, so I don’t think that is a problem for the future. I can also put sheep coats on them, just to make sure. Or did I just want to forget about the wool?

I’ve thought over the different paths I could take with sheep in the future. I could just keep Crazy and Annabelle as long as they live, as pet sheep, and eventually close my journey with sheep. I’ve been keeping the two of them with the goats, and even Crazy has become more friendly. Lately she’s been greeting me with funny high sheep bounces when I come out in the morning, eager for me to open the gate to let them all out from the barn yard into the goat field for the day.

I don’t feel done with sheep. I enjoy them and would not like to think of my farm someday without them. So…. I could move ahead with sheep and source a new ram and a new ewe or two.

If I were to take the second option, what kind of sheep?

I looked into Katahdin. They are great meat sheep and shed their winter wool each spring. No shearing!

Or I could get serious about wool sheep and go for a true fiber breed. I’ve never really been attracted to those soft, soft luxury fibers of the popular wool sheep, though. I’m a texture person. I really love the Cotswold/Jacob yarn–crimpy, curly, not too soft. There’s just something substantial about it. It has hand-feel. In the same way that I gravitate to rustic soap from the hot process method, I prefer a rustic wool. But at the same time, I wasn’t really sure I wanted to get new Cotswold and Jacob sheep. I felt like I needed a fresh start with sheep–a true new chapter where there was something new to learn and experience, not a repeat of the past. I started researching breeds and pondering which were the right sheep for me. Often when simmering ideas, the universe will offer a ray of synchronicity.

A few days ago I met a local sheep farmer. His sheep are Tunis (also known as Tunisian Barbary). Tunis sheep are an ancient breed–they are the “fat-tailed sheep” of the Bible. They have cream-colored wool with cinnamon-red faces. (The lambs are born tan or red and the body wool later grows out creamy, leaving the red faces.) Not surprising for an ancient breed, they’re multi-purpose. They provide flavorful meat and wool suitable for spinning and crafting, and as a bonus, they’re heavy milkers. I hadn’t really been thinking about that last point, but the overall potential of Tunis sheep is really intriguing to me. The pure Tunis sheep are beautiful and interesting, and they would make fascinating crosses also with Annabelle and Crazy. You can see some photos of Tunis sheep here.

I was introduced to a local spinner who has worked with Tunis wool and so was able to give me her recommendation on the quality of the yarn. And I tucked her phone number away as a future source of less expensive and local processing.

This fall and winter, I’ll continue to run Annabelle and Crazy with the goats and Great Pyrs. The sheep field still lacks a winter shelter and a covered hay feeding station. I also need to figure out my livestock guardian setup for the sheep. A number of people commented about keeping a Great Pyr pair together as the strongest protection, and I agree. I want to keep Coco and Chloe together with the goats. But what about the sheep? Before turning a flock out into the sheep field, they need protection. Most likely, this is going to mean acquiring another working dog or even a pair, chosen specifically to work with sheep. I’ll be pondering this issue over the next several months. If you have any suggestions, let me know. (Note: I’m not interested in a llama. I also don’t believe donkeys are the answer, at least not my donkeys. A donkey pair, such as Jack and Poky, bonds to the pairing. A sole donkey could bond to a flock, but I don’t want to separate Jack and Poky or acquire another donkey. I feel strongly about dogs as the best guardians for my situation. What kind of dog or dogs is the question.)