I live, breathe, and dream this question: Is Glory Bee pregnant? Is she? IS SHE?!

What if she’s not? What if I never have milk and cream and butter again? 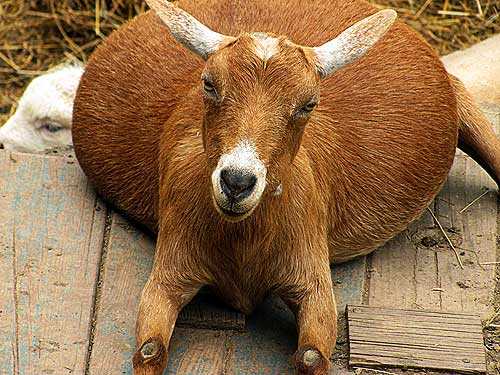 Back to the cows. I dug into the CITR vault to when I was having this same Big Question about BP. I posted photos of her here the first week of August, 2010. Glory Bee was born less than six weeks later. I was advised by you, my wise readers, that if I stood at the back of the cow, she should look lower and heavier on the right side if there was a calf in there. This is how BP looked then (six weeks pre-birth). 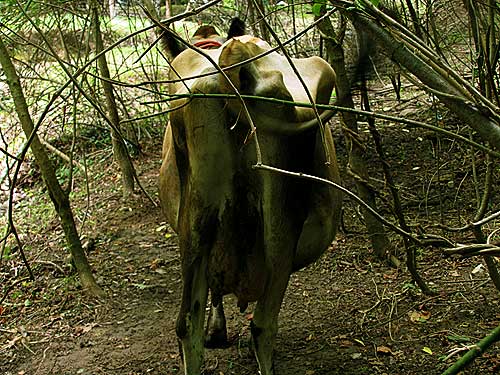 My. Sometimes I don’t know what to say about her appearance. She tries! She puts on her makeup every day and she combs her hair and she faces the day. We just have to give her a break.

So I sought out my lovely heifer, who looks much better from her business end than her mama, I must say. 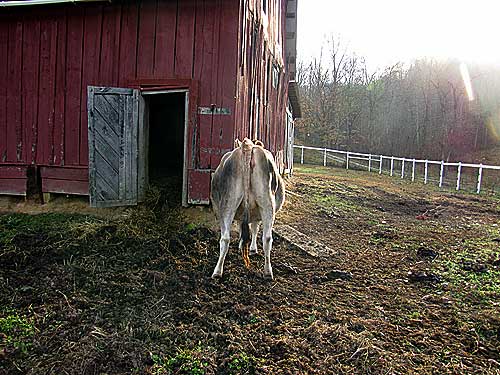 Maybe it’s just easier to see on BP because she is so bony, scrawny, and beat up? 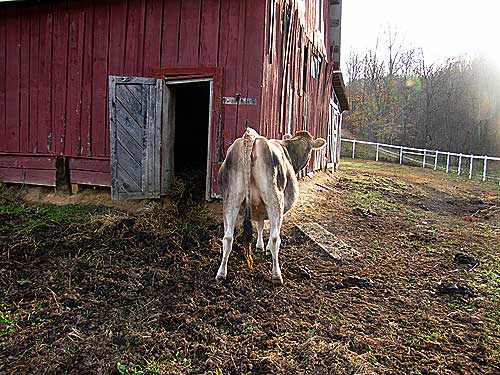 Glory Bee is one of the best-looking dairy cows you’ll ever see. Big, beautiful, and healthy through and through. 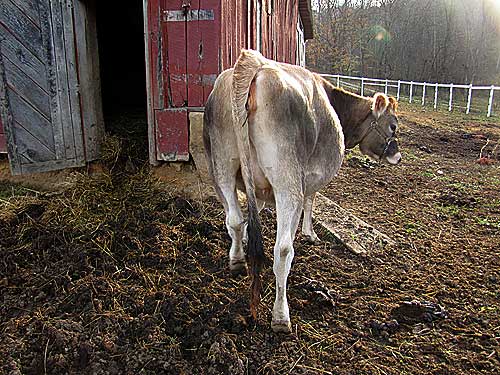 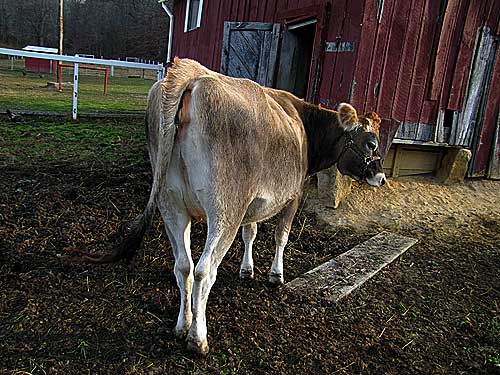 By the way, if you’re new around here and have missed these discussions in the past, a frequent question about milk cows is why they have such a protruding bone structure. People tend to more often see beef cows than dairy cows. Beef cows don’t have this bony structure to them. The reason dairy cows do is to provide the infrastructure to support their udders. Dairy cows produce much more milk than beef cows and have to have bones that will hold gallons of milk at a time. Those humongous bones are doing a job. BP’s bones are much more protruding than Glory Bee’s–BP is older, and she has never had a good appearance. I think she looks better now, actually, than she did if you look back to the first photo above (as opposed to the photos below) since I’ve had her at Sassafras Farm. But. I’ve always fed BP as much as she wants (though she is on better pasture here). It’s hard to put weight on an older cow. Glory Bee, on the other hand, was raised on her mama and has been fed well all her life. She’s one good-looking milk cow! I’m proud of her! 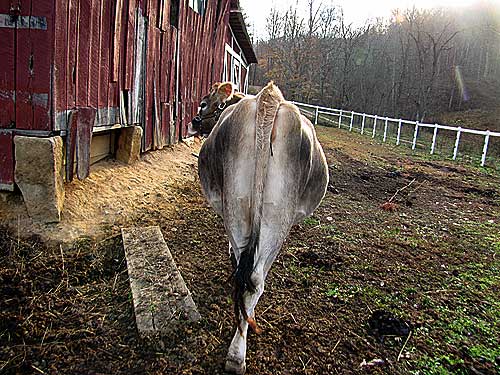 (And no, I haven’t forgotten their new halters. It’s on my list for my next trip to the feed and seed. Haven’t been yet.)

I tried punching on her and I can’t ever feel anything when I punch a cow. I never see anything moving in there, either. I never saw anything moving in BP when she was pregnant. I just don’t have the knack or the surveillance technology or the proper eyeballs. Adam punched on Glory Bee this summer and declared he felt a calf in there. He’s been raising dairy cows all his life, so you’d think he’d know…. Right? Right????

Her teats are still tiny. 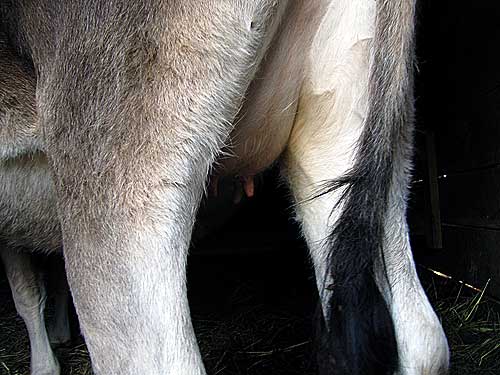 Just for fun, I decided to take a gander at BP. 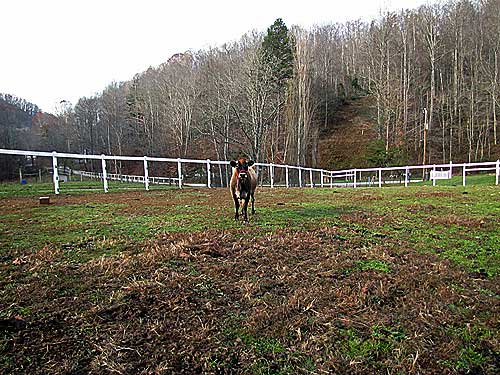 She was with Glory Bee at Sarah’s farm. 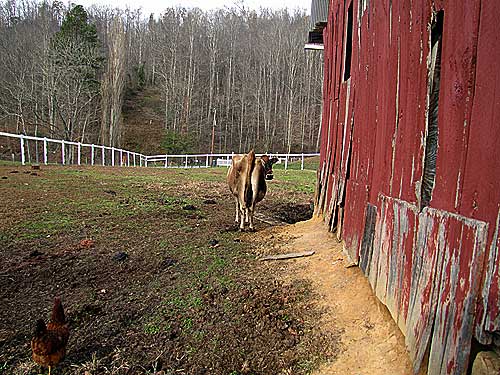 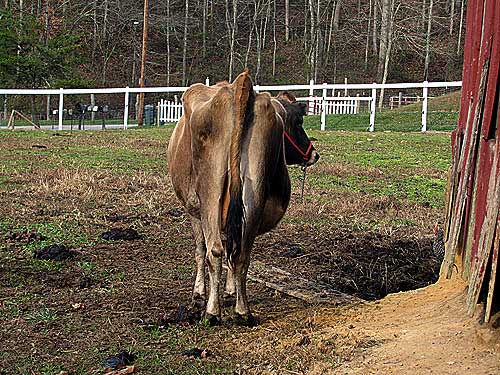 She IS old. COULD THAT BE A TUMOR? Maybe she always looks like that. I don’t take a lot of behind shots of BP on a regular basis.

I tried to call the country preg checker, but haven’t been able to get hold of him yet. People who will stick their entire arm up inside a cow don’t fall off trees, so unless I can get hold of him, my only other option would be a vet (expensive). I will probably wait in that case. I just want to know! Before a calf falls out of one of them! Maybe they’re both pregnant! Maybe neither one of them is pregnant! 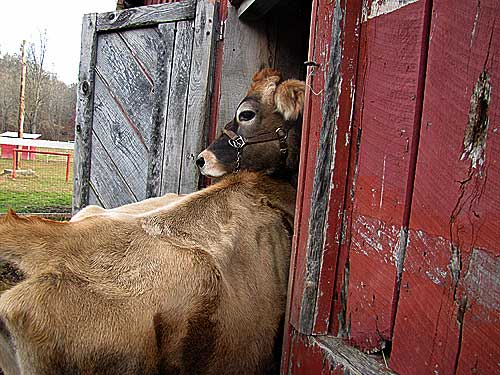 There’s a calf coming out of BP right now!!! 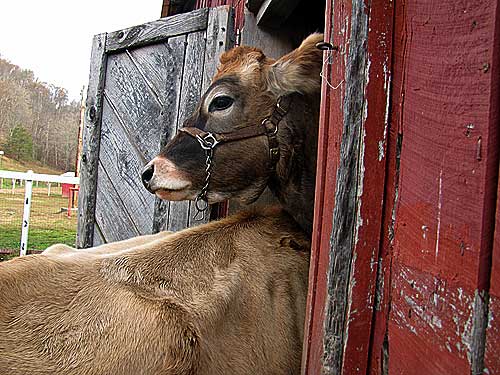