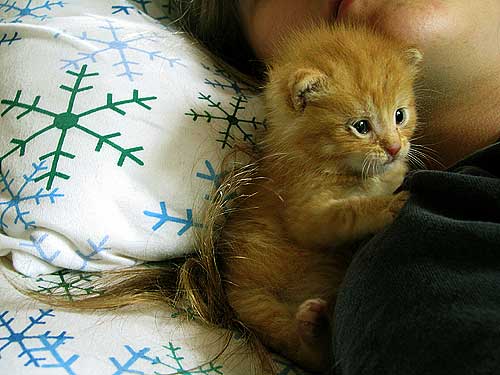 I’ve always loved cats. I never had one growing up, so the first thing I did when I was out on my own was get a cat. Over the years, I usually had anywhere from two to four cats at any given time. The only cat I’ve ever had that I didn’t like was a Siamese cat that kept biting me. I finally gave it away because I was scared of it.

When I moved to the old farmhouse, I had one cat. There were a lot of wild barn cats around there, and next thing I knew, I had 10 cats. Most of them, I’ve had since they were kittens because they were rescues from the wild mamas. I get heckled sometimes by people who are just passing through and stumble onto a post where I say I have 10 cats and they tell me to Stop Having Kittens!

All of my cats are spayed or neutered. I’ve never–in my entire life–had a cat that had kittens.

(That was just for the record.)

Buttercup is the cat I brought with me to the old farmhouse. He’s 12 years old. I’d say that makes him really grumpy, but he’s always been really grumpy. He’s also completely devoted to me and me alone. He can’t stand other people or other animals. He especially can’t stand Morgan. That is probably related to the fact that Morgan was three years old when I got Buttercup and you know a cat loves nothing better than a three-year-old except maybe a bath.

Buttercup on a hay stack. 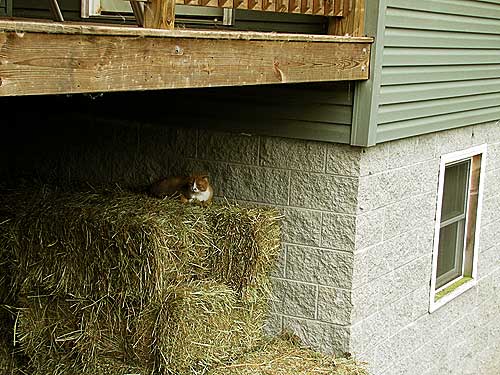 One of our first cats at the old farmhouse was Killer. His claim to fame is that he got stuck in the dashboard of my car. That was back when we thought Killer was a girl. I took Killer and another cat to the vet to be fixed and discovered I had them both sexed wrong. My trouble with sexing Glory Bee is nothing new. 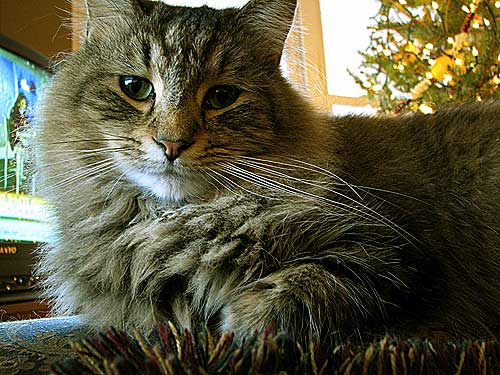 The name Killer came from his penchant for hiding inside Kleenex boxes when he was a kitten. (He has a very timid personality, so Weston thought it was funny to call him Killer. He’s Weston’s cat through and through and will follow Weston around when he’s at home.)

I don’t have great photos of all of my cats because some of them don’t cooperate very well.

Actually, none of them cooperate very well. I try to get them all together for family pictures and they won’t come. Here are seven of them at the feed bowls. From left to right: Squiggles, Little, Diego, Buttercup, Killer, Kitten, and Wiggles. 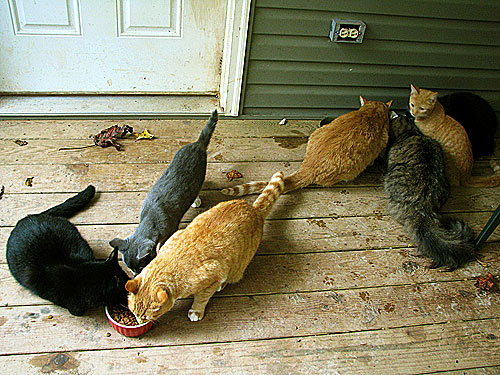 Missing from this photo: Weezie, Sugar, and Spice. (They were avoiding the suppertime rush.)

We have three black cats–Wiggles, Squiggles, and Weezie. Killer is a huge, fluffy Maine Coon-looking cat. Three orange cats–Buttercup, Diego (aka Diggy), and Kitten. Spice, a black and white “tuxedo” cat. Sugar, my sweet calico, and Little, a gray and white cat.

Spice’s claim to fame is her ability to open doors, among her other magic tricks like catching hummingbirds in mid-flight. (NOT one of my favorite tricks of hers!)

Sugar disappeared after we moved to our new farmhouse and was gone for three weeks. There was a dramatic episode in which I found and recaptured her. 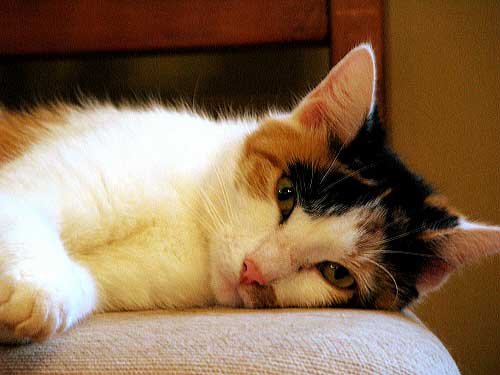 Kitten and Little were our last additions. They are both aptly named as they are small cats that stayed small. Like miniature cats. (Cute story–read Kitten’s Great Escape.)

Kitten and Little, the lovers. 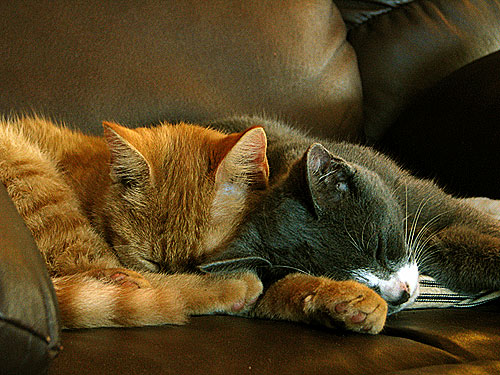 Luckily, since we moved away from the old farmhouse, the feline acquisition has ground to a halt. Ten is enough. More than that, and you are a crazy cat lady. I’m pretty sure 11 is the pivotal number.

This post is part of my (sporadic) on-going “Cast of” series. See all my Cast of posts here.

See all the posts in my Cats archives here.