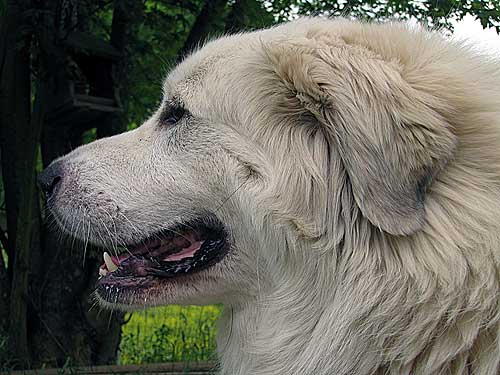 Coco is doing so much better. (In case you’re new here and don’t know what I’m talking about, Coco went missing–read about it here–for nearly a week after she was hit by a car. It pretty much felt like a miracle when she came back–read here. She was at the animal hospital for two months, and has been home now for a month.) 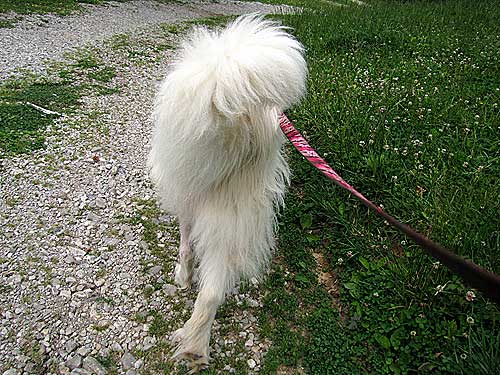 She was particularly gimpy at first, and her leg still looked bad–mostly because she didn’t have much fur re-growth on that leg yet. It’s looking a lot better now. 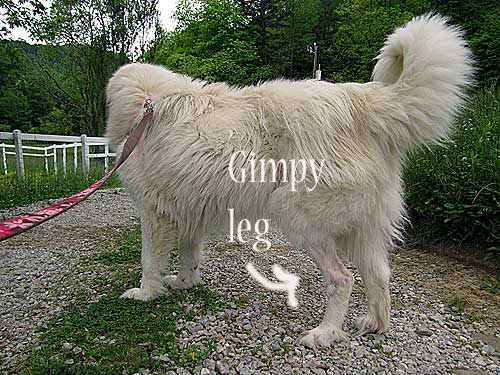 In the olden days (pre-injury) she didn’t like to come inside the house. She has never been a house dog. It was almost impossible to get her into the house. It usually involved a lot of pushing, pulling, and fur flying, then watching her run away on the rare occasions I tried to get her in the door. She also had a severe dislike of being leashed at any time for any reason.

Now she’s become such a house dog, I’m not sure she remembers how to work–except for that comforting woof from downstairs in the middle of the night. Then I know. Oh, yes, she is still working. 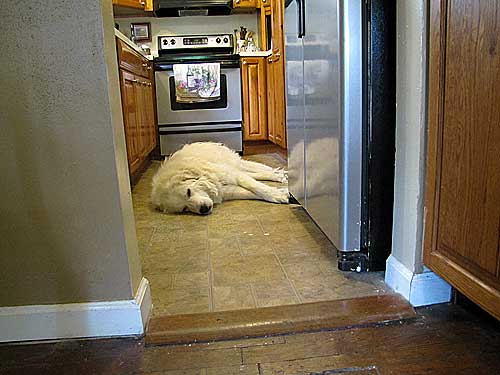 But now she loves the leash. The second I pick it up, she’s by my side, ready to be leashed and taken outside. (If she was outside and I wanted to put a leash on, I’m not sure this would work in reverse.) 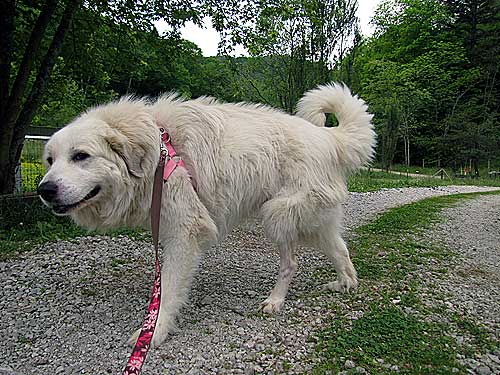 There’s no set schedule for her progress. It will be what it will be, on her time and at her pace. In the beginning, I took her outside for quick bathroom breaks close to the house. Over the weeks, this has progressed to walks further afield around the house and studio and barn yard. She’s still a little gimpy, but stronger. She puts weight on her injured leg and walks on it. She rarely picks it up anymore. Next, I’m planning to start taking her on some hikes on the hillside above the pastures. Longer walks, more exercise. 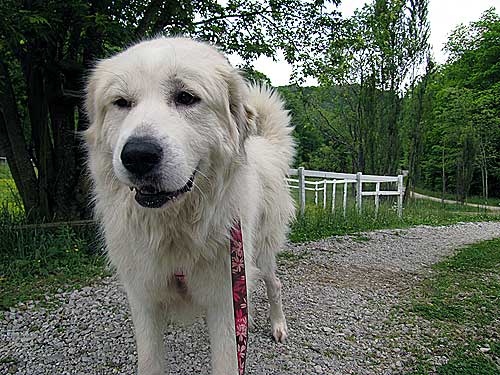 Maybe she’ll show me where she was those six days. 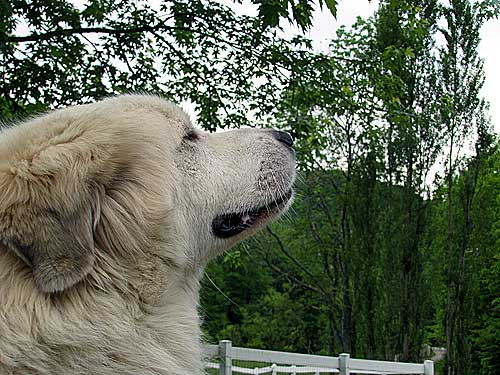 But probably not. Putting her back to work in the goat yard isn’t on the schedule yet. I’m enjoying her company in the house, and she makes me feel safe. Maybe her new job is guarding me. Though I think eventually she is going to be ready, and eager, to get to work outside. Still, she won’t be ready for that for awhile as we take a slow path to the time needed to strengthen her damaged joint.

Meanwhile, I take her to see the animals on our walks closer to home. 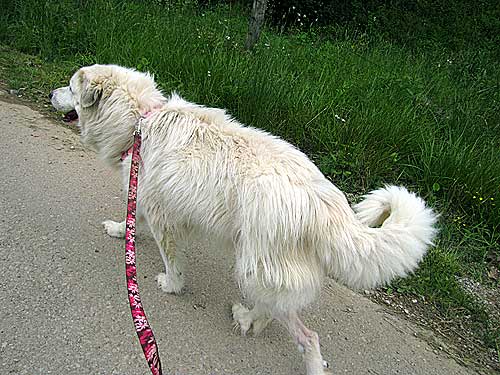 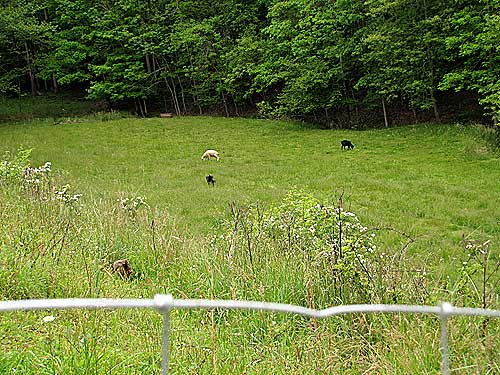 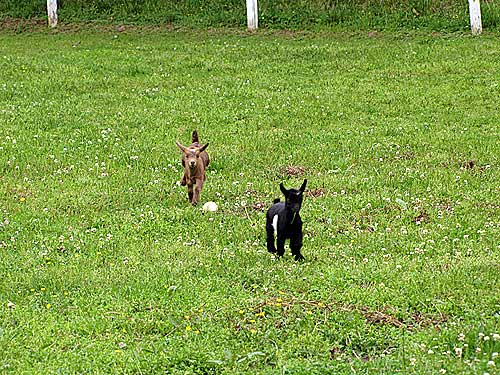 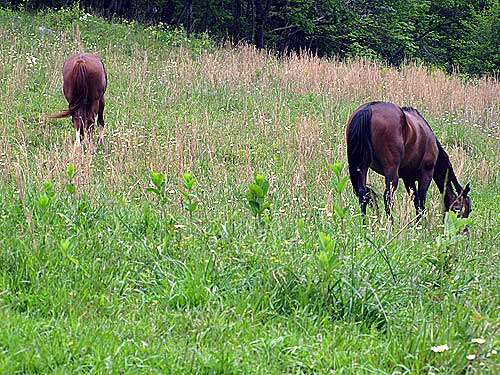 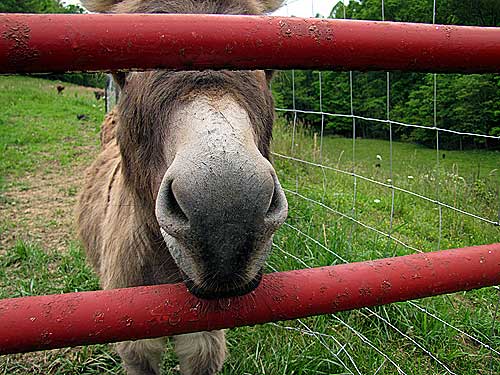 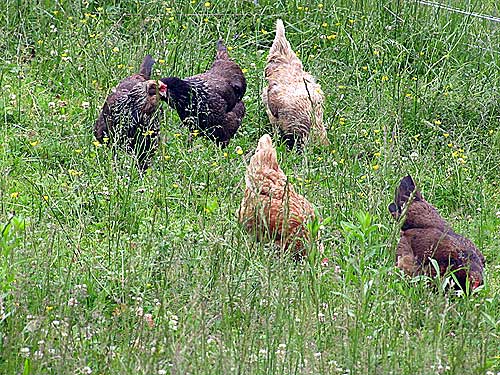 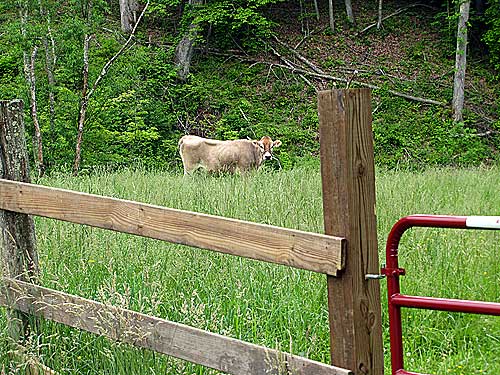 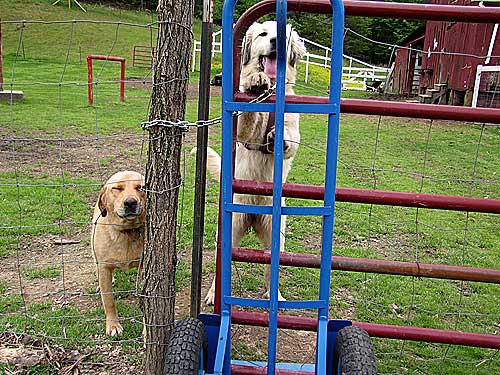 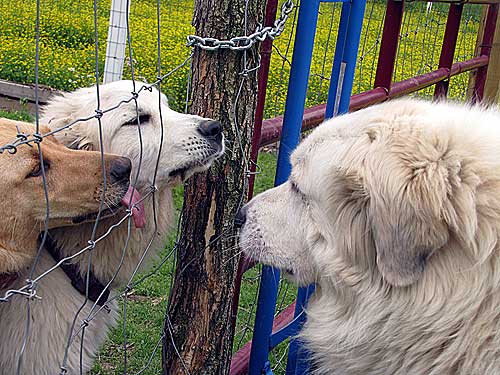 Then Coco remembers the Milk Bone waiting inside and says, “It’s time for Judge Judy and my bon bon. I’m sorry you can’t come!” 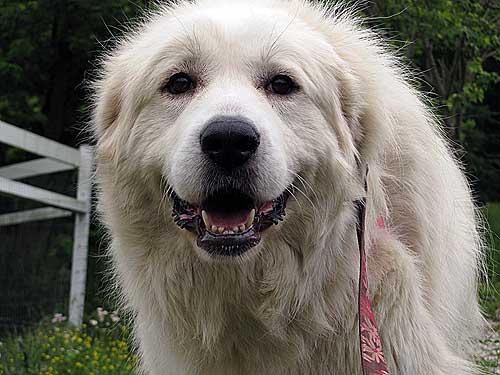 And we go back inside.