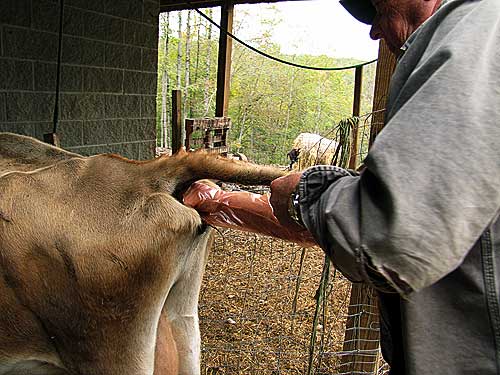 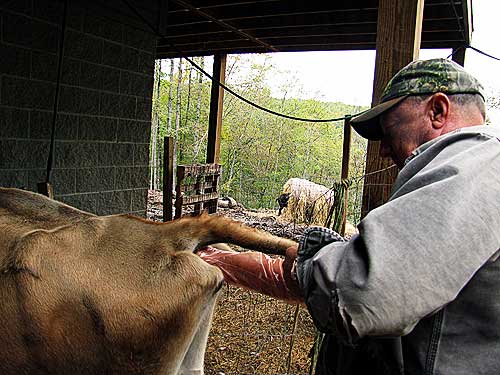 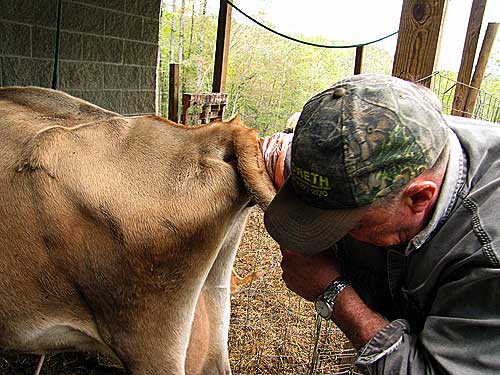 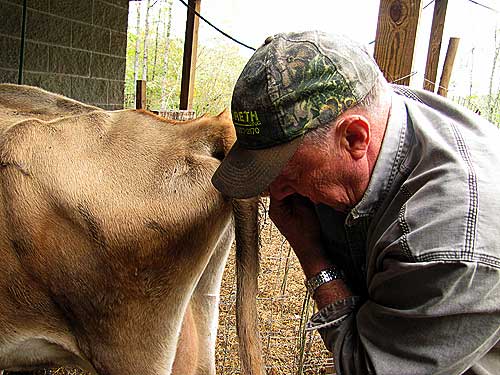 Tucker the “country preg checker” came out to the farm yesterday. He lays pipeline when he’s not poking his entire arm inside cows. He went in and out about five or six times, so he didn’t give up easily, but he said he felt NOTHING. NOTHING!!!

In other news, after he took his glove off, he grabbed her other end and pried her mouth open and said he thought she was eight years old and ought to be good for more calves. But he couldn’t find one in her right now. He tried punching around on her sides, too, and still said NOTHING. NOTHING!!!

On the upside, other than not enjoying having her mouth pried open, BP didn’t protest any of this intrusive activity and acted like nothing was going on.

Which is perhaps apropos since apparently NOTHING (!!!) is going on!

I still have the vet scheduled to come out here next week. Glory Bee needs her vaccinations, and the brucellosis shot, in particular, must be administered by a vet and officially recorded. Since he’ll be here anyway, I’ll have him take a second stab at BP to double check, but I doubt the country preg checker is wrong. I don’t want to take BP back to Skip’s. It’s too hard to milk her over there, especially now that we’re having rains. The river is high, the driveway is slippery. I can’t have my cow that far away. It’s also not easy to get someone out here on the drop of a dime and AI must be done in a timely way when the cow is in heat. I need to learn to do it myself so I can keep my cow home.

According to a Pennsylvania State University study, 63% of the dairy cattle bred artificially in the United States are bred by owner-inseminators and, “There were no differences between professional technicians and owner-inseminators in accurate rod tip placement or semen distribution.” The only difference in success was in experience (whether professional or farmer).

I just need some semen and some long gloves. And a how-to video! I can do it!