Monday evening, Sprite, who’d been behaving normally all day, was standing in the middle of the goat yard making “I’m in pain” noises. We ran down there and could see she was in labor. We moved her quickly to the goat house maternity ward. She went to the corner and stood and cried a little bit. She finally sat down and we watched as the baby came out. It’s so amazing, every time.

The baby flopped and mewed for its mother.

Sprite went to the opposite corner and wouldn’t even look upon what had sprung from her flowered loins. Whatever it was, she didn’t want it. I turned her around. She turned back. I turned her back around and pushed her a little toward the flopping, mewing thing. She climbed up onto the table in the goat house to get away.

The baby struggled to its feet, still covered in goop. Sprite wouldn’t clean it.

I thought–maybe she’s having another baby. Maybe she’s busy.

But when we found Fanta the night before, she had just had her second baby. It was still covered in goop and she was cleaning it. The first baby was already on its feet and obviously cleaned off and fluffy. Fanta didn’t wait till she had the second one to clean off the first one.

Sprite wouldn’t even look at this baby, much less go near it. I made her move down off the table. The baby half-walked, half-flopped toward her, crying. Sprite climbed back up on the table.

Afraid it would get chilled as the minutes ticked by, we got a towel and dried the baby off as best we could without, you know, licking it. The other babies came around, nuzzled it and talked to it. Sprite drank some water and ate some hay. And wouldn’t look at her baby. She ran away every time it wobbled up to her. It was one of the strangest, most unnatural things I’ve ever seen.

We put the baby under Fanta, who was still only 24 hours from delivering her twins and would still have colostrum in her milk, and let it suck on her. She was busy eating hay and she has two babies so she wasn’t paying attention to who was sucking on her. And that baby wanted a mommy so badly.

It was drizzling and, luckily, not a very cold night, but there was still snow on the ground. If Sprite had given birth just a little bit later, we would have gone to bed. She would have had the baby in the snow in the middle of the goat yard–and she would have walked away and left it there.

Eventually, when she never showed any sign of delivering a second one, I went inside and found the little goat milk pail. We held her down and I milked some colostrum out of her. Then I thought–why not try the baby? I put the baby under her. We had to hold her. She didn’t want the baby anywhere near her. We let the baby nurse a good long time to get colostrum. I took the colostrum I’d milked out of her into the pail inside the house to store. We stayed with the baby in the goat house for a long time before leaving it for the night to snuggle in with Nutmeg, Fanta and their babies in the dog house inside the goat house. (Sprite won’t go in the dog house with them. She doesn’t want to be anywhere near any of the babies. Especially her own.) Fortunately for this baby, it has three little goat buddies. And two other mommies.

Well, maybe just one other mommy.

Nutmeg: “I’m having nothing to do with this. I have my own baby.” 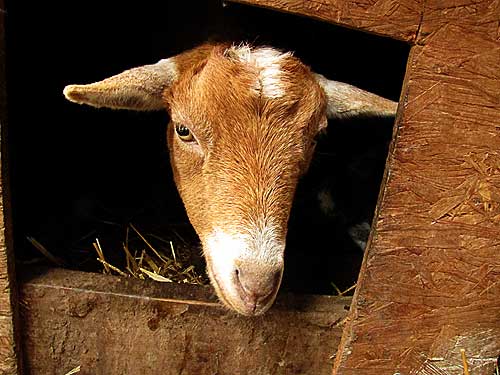 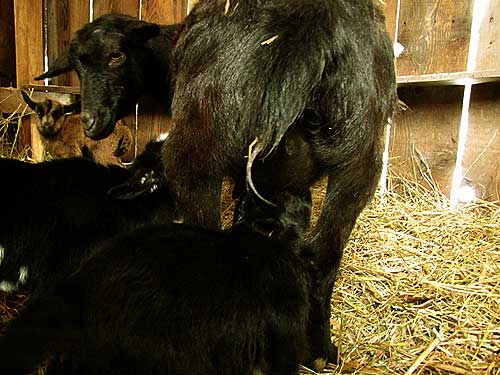 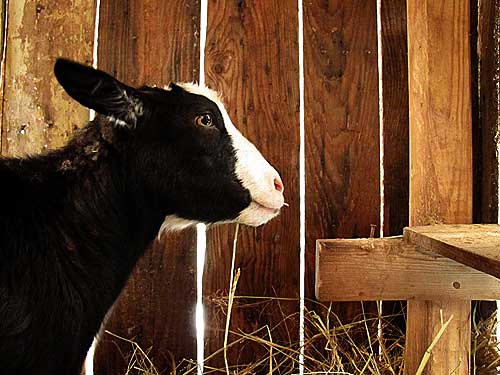 The “new” babies–Fanta’s two and Sprite’s one–are baffled and new to the world. They reach their little mouths to any mommy who passes by. Sprite runs from them all. Fanta feeds them all–when she’s not paying attention. She knows that other one isn’t hers. Yesterday, throughout the day, I went down to the goat house repeatedly, backed Sprite into a corner, held onto her with all my might to stop her from running away, and let the baby suck. It needs all the colostrum it can get within the first 24 hours of birth, and especially within the first 12. (If you have goats, see this article about colostrum replacements, substitutes, and “borrowed” colostrum from outside your farm.)

By yesterday afternoon, I was introducing a bottle of Sprite’s colostrum to the baby to get it used to the idea, along with continuing to hold Sprite down to nurse directly. 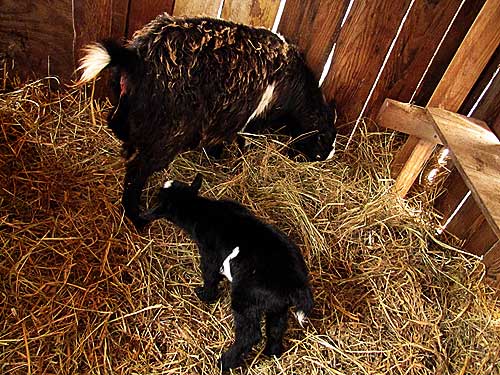 Sprite continued to run away unless she was held in place. 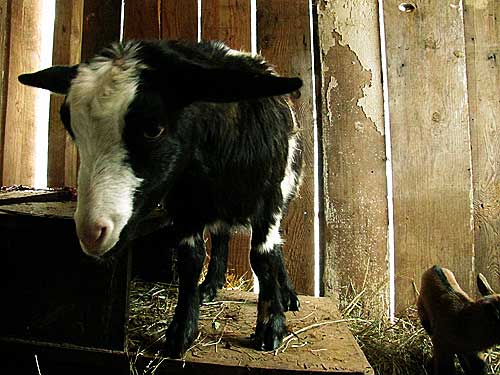 Because it causes her stress to force her to nurse him, I won’t continue to do that. Last night was the 24 hour point for the colostrum intake. We’ll probably let Sprite out of the goat house today–she wants out very badly. She wants as far away from that baby as she can get. The baby continues to nurse sporadically on Fanta–when Fanta’s not looking–and has also taken eagerly to the bottle. I’m going to dry off Sprite. I have two goat mothers that can be milked, and I always have milk from BP.

It’s cute when there are three little tails wiggling back and forth under Fanta. 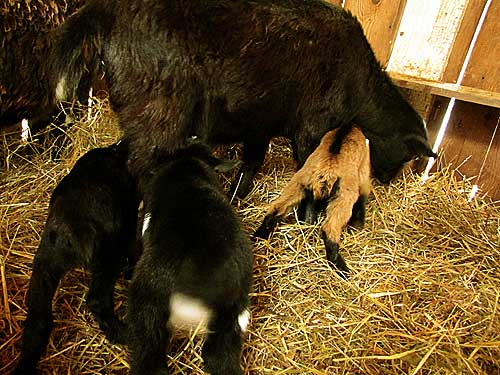 It’s a boy. A seriously cute little stinker of a boy who was born as big as Dr. Pepper is at a week old. 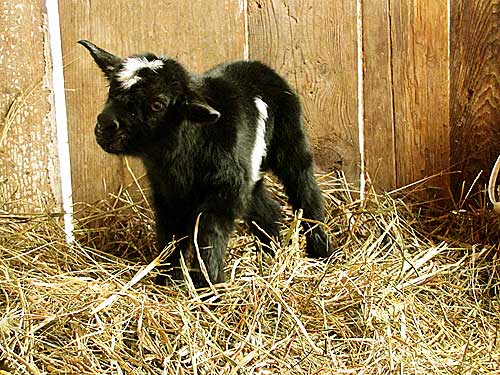 He’s black with a tuft of white on top of his head and at the end of his tail, and also patches of white on both sides. 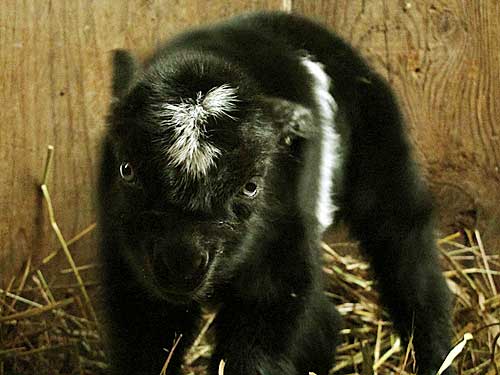 We’ve got a bottle baby.