And guess who it is! 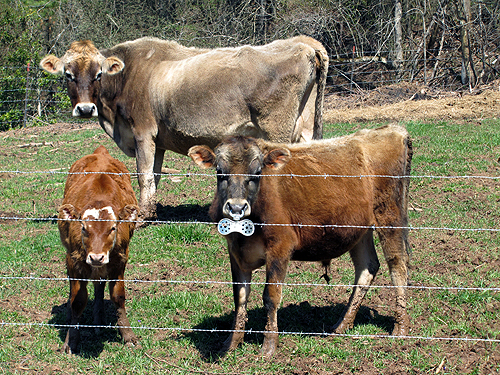 Unbelievably, our year-and-a-half-old Jersey bull suddenly, inexplicably, decided to start sucking on Glory Bee last week. I’ve had plenty of calves suck on other mothers over the years, but this bull didn’t even grow up with Glory Bee. He’s her boyfriend! I noticed the milk supply taking an abrupt nosedive as well as finding Glory Bee’s teats somewhat abused and cut, then caught him milking her side by side with Baby Belle. That meant that when I separated the baby at night, so I could milk Glory Bee in the morning, the bull had the dairy store all to himself! And was not only taking my milk but being a bit rough with her. Separating him from Glory Bee before milking isn’t convenient right now, nor a good idea since he is, after all, here for a reason.

Which isn’t to milk her.

Which is why he’s sporting a new piece of jewelry. 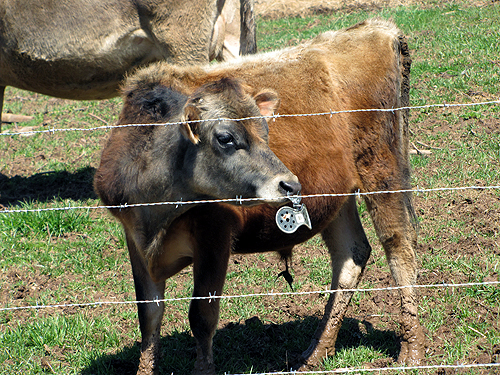 He doesn’t like it, of course. We’ll see how long he keeps it on. But for now, he’s the new poster child! Glory Bee wore some weaning jewelry for a while when she was about a year old. Several years later, I found her on an animal activist site (using MY photo of her wearing a weaning ring) as the poster child for farm animal abuse, which sparked quite a bit of amusing comments when I posted about it in The Poster Child. This post is copied below to commemorate the bull’s new trinket (and for your entertainment).

It was interesting timing that I caught this incident (which surprised me) on camera several days ago: 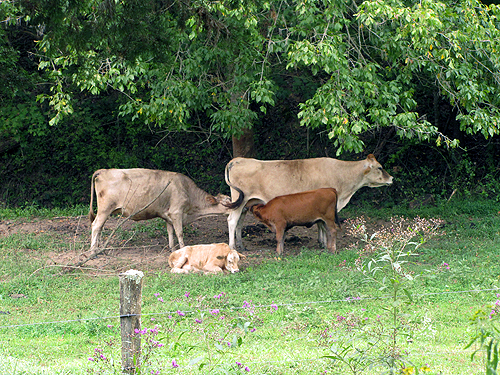 I haven’t seen Moon Pie get under Glory Bee in a very long time. Generally, these days, how I wean is that I don’t wean. Once mama gets pregnant again, the older baby will give up to the younger one. For example, when Moon Pie was born and Dumplin had to step aside.

Note Dumplin’s distress here as she realizes a new baby is in town and she’s been edged out: 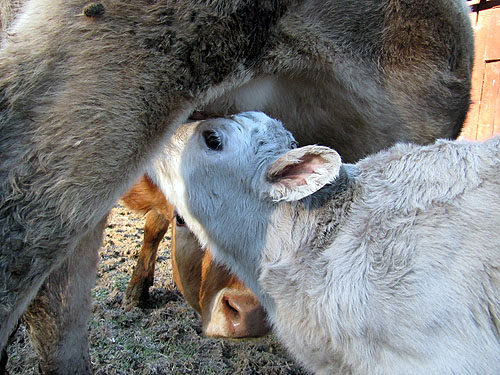 However, in Moon Pie’s case, there was a year when I missed out on a bull. Glory Bee didn’t get bred again until the following year, so Moon Pie never had a new baby come in to take over at a time when she would have gotten herself out of the nursing habit. Apparently! Because apparently she is still taking nips at mommy’s milk wagon. She probably isn’t doing it very much, since this was the first time I caught her, but she’s doing it.

There are all sorts of reasons for weaning more actively than I do. For one thing, it’s just hard on the cow to never get a break, their drying off time before their next calf. And of course, an older calf doesn’t even need the milk from mommy. And when there’s a new baby, it’s the new baby who needs it, not an older baby who is old enough to have babies herself.

Unless you completely, and longterm, separate a mommy and older baby who isn’t wanting to wean, they might never stop. (Evidence: Moon Pie.) Many people are much more active about weaning than I am these days, but I did attempt to be more active toward it when I first had cows and I used a calf weaner. Also coincidentally, when I posted the photo of Moon Pie sipping on Glory Bee’s udder, someone mentioned calf weaners in the comments. And also also coincidentally, I’d recently had brought to my attention that Glory Bee is (also apparently!) the poster child for animal rights activists opposing calf weaners.

See this post here for my attempt at using a calf weaner in Glory Bee’s young heifer days: Silence of the Calves.

If you’ll note the date at the very bottom of that post, it’s October 2011. (Glory Bee was born in September 2010.) And also note how big Glory Bee is. She’s almost as tall as her mama, BP, and still attempting to nurse. Glory Bee was over a year old at that point. At the time, we were trying a calf weaner on her. Here is the original photo: 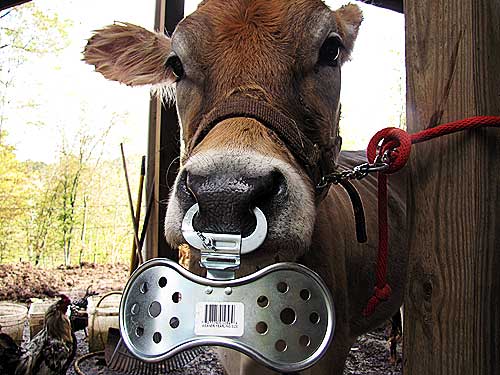 Here is the same photo, stolen and used by activists opposed to calf weaners. 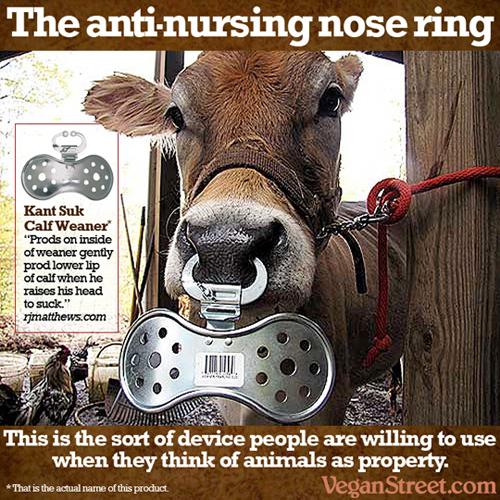 You can find the post with Glory Bee’s photo used to oppose calf weaners at a website called Vegan Street here.

Did they actually look through the entire post from which they took the photo? Again, my original post is here: Silence of the Calves.

Glory Bee is quite obviously an OLDER CALF, in fact a plump ripe young heifer ready to be bred with a baby of her own. And in case anyone wonders, that weaner is not drilled into their nose or anything. No piercing. It’s got little plastic balls on the ends of this thing you hang from their nostrils. It’s annoying to the animal, I’m sure, but it doesn’t hurt them. And honestly, Glory Bee flung that thing off her nose and into the woods within a few days. I eventually found it and I keep it in the milking parlor along with some other things that I show workshop attendees as curiosities. As I stated above, I now use the new calf route for weaning older calves. Which apparently doesn’t work all that well either! I’m not real intense over weaning anymore.

But, for Glory Bee of all cows–the most spoiled brat cow on the planet–to be used as an activist poster child against weaners?

I don’t know whether to laugh or just roll my eyes.

What do you think about calf weaning tools like this one? Mean, useful, whatever, hit me with it. I’ve got the poster child cow, that must make me the hotline….or complaint desk….or something!

By the way, when I posted about this on my personal Facebook page after I was made aware of it, Morgan just went off, dying of laughter over someone using spoiled brat Glory Bee as a poster child, and began a long round in the comments of puns, mostly by her and my friend Sarah (who also has milk cows). Here are a few of the best ones:

Morgan McMinn: This is funnier than the people coming to the farm complaining that the barn is dirty.

Morgan McMinn: And even funnier than the lady who thought we were starving our very fat horses.

Suzanne McMinn: I’m not sure what to do right now. My cow is so offended.

Morgan McMinn: Some one with real mootivation for for this case.

Suzanne McMinn: Someone who would really milk it for all it’s worth!!

Sarah Farris Manry: Someone who won’t let udders get away with this infringement!

Morgan McMinn: Gotta be some one who isn’t afraid to hoof it through the work!

Sarah Farris Manry: Someone who’s ready to horn their way through the mess!

Suzanne McMinn: Glory Bee is so upset, she might never be the same. The bull might have a suit for loss of consortium!

Morgan McMinn: Someone who has a real beef with it!

Sarah Farris Manry: If something isn’t done there’s going to be a lot of crying over spilled milk!

Morgan McMinn: Our dairy beloved cows are being disgraced by this propaganda!

Sarah Farris Manry: No worries! With the right lawyer, Glory Bee’s side of the story will be herd!

Sarah Farris Manry: Plus, I’m sure that Glory Bee will post pictures to assure the public that she is treated bovinely.

Morgan McMinn: We need to ring the cattle bell to raise awareness of the offense!

Betsy Ross Pensiero: Well, this is sure a great cowllection of advice.