We’ve been working on a duck pond! 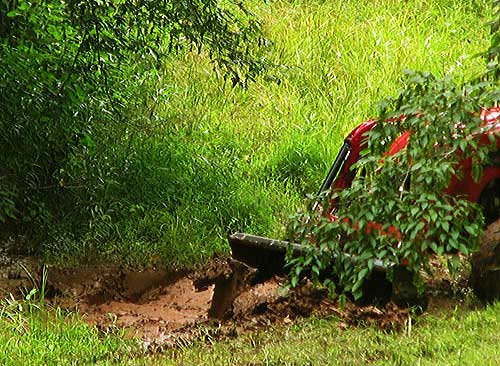 And you know what that means…. 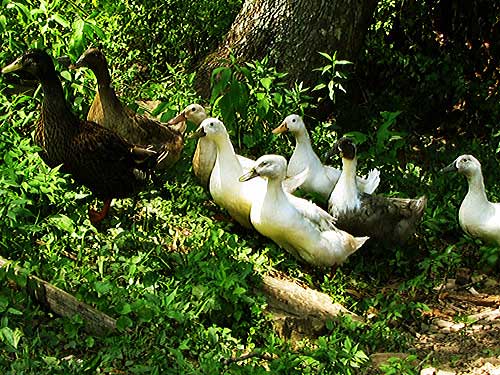 So I took another trip to the chicken farm where we got our babies. Not for eggs this time, but for a breeding pair of ducks. I’m not up for another round with the incubator just yet and we just broke the tractor in digging this pond out near the spring on our hill. It will take a bit for the pond to fill, so while that happens (and while the ducks adjust to their new surroundings) I need to keep my ducks with the chickens. My chickens are three months old now and I was afraid to put small ducks in with them. I was looking for three-month-old ducks.

There are plenty to choose from at the chicken farm. They have a lot of ducks. 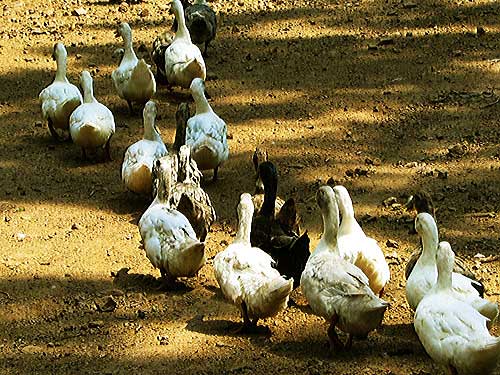 And guineas and geese and…. Do you see that thing in the center of this picture? 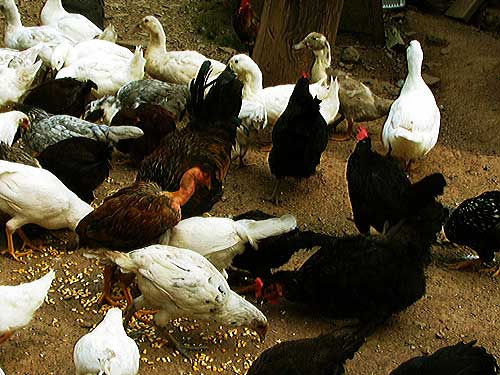 It’s a Turken, or what they call in Europe a Transylvanian Naked Neck. But it’s all chicken despite its turkey-like bare neck. 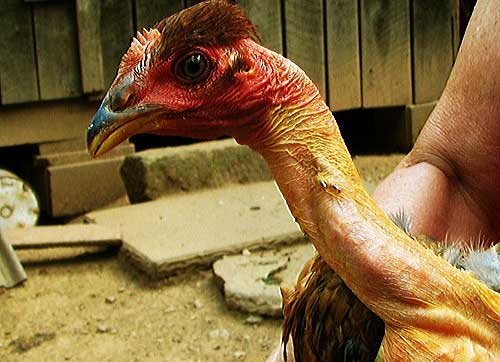 I think it’s the ugliest thing I’ve ever seen. I don’t want any of those.

I did wish I had some of these again. 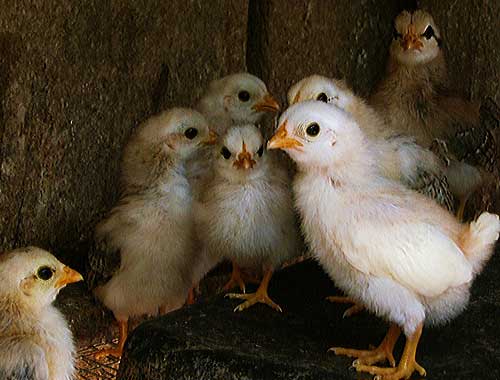 They’ve always got babies at the chicken farm. But I wasn’t there for more chickens. I was there for ducks. And I brought these two home. 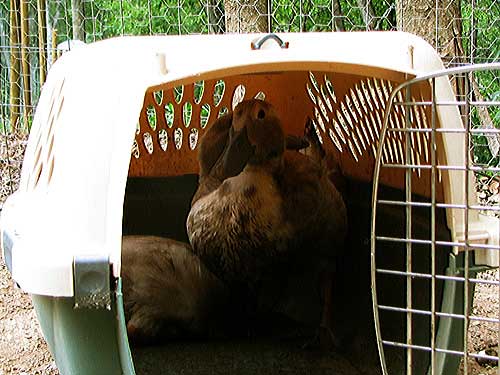 A three-month-old breeding pair. They’re a Blue Swedish cross. (I don’t know what they’re crossed with, just that they’re predominantly Blue Swedish. They like to mix it up at the chicken farm. I do, too, so that’s okay.) 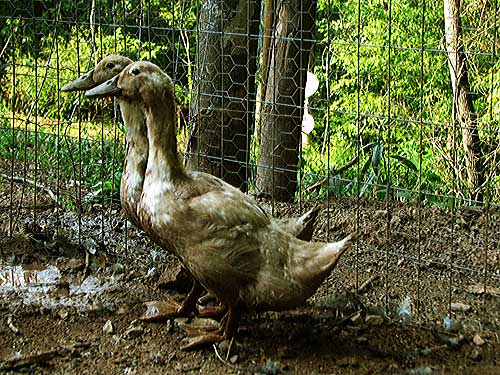 The chickens were terribly curious. 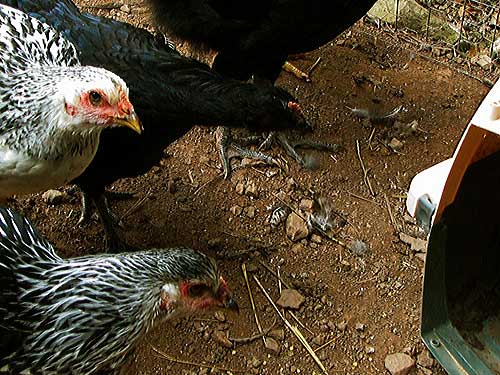 There was a lot of clucking and crowing and quacking when they came out of the crate. But eventually the chicken yard settled down and they worked out the pecking order. I’m a little bit worried about one big bad brown rooster, my alpha male, who has tried to peck at them, so I’ve been keeping a close eye on them and at night I’m keeping the ducks in the crate. I’m not ready to leave them alone inside the chicken house with that big bad brown rooster yet. These ducks are used to being around chickens, but my chickens aren’t used to being around ducks. I’ll be careful till they are.

And so–I have ducks!!!!! Aren’t they pretty? (I bet they do synchronized swimming and baton-twirling, too.) 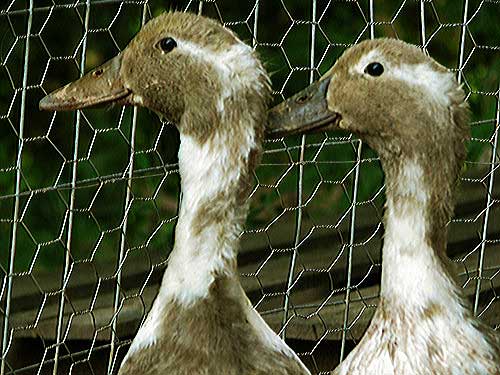 I’d like to get some more ducks, some white ones, who knows. I like variety! This is just the beginning. Our first farm ducks!

The rest of the farm creatures reacted along with the chickens. Dookie-the-farm-shih-tsu was quite excited for awhile. 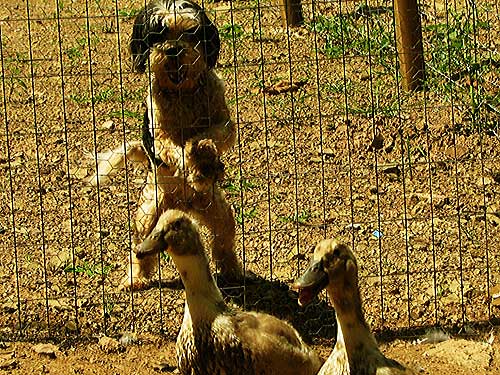 Clover said, “I don’t care if you have ducks. But would you please– 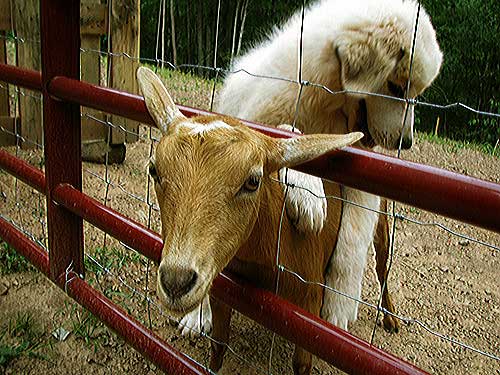 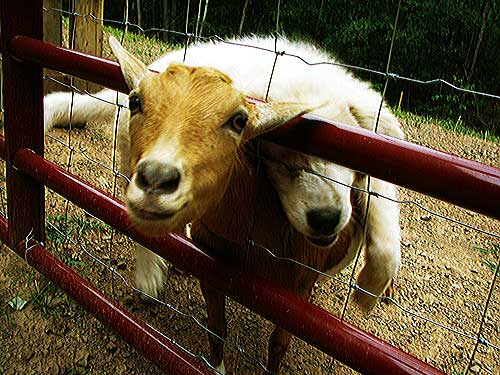 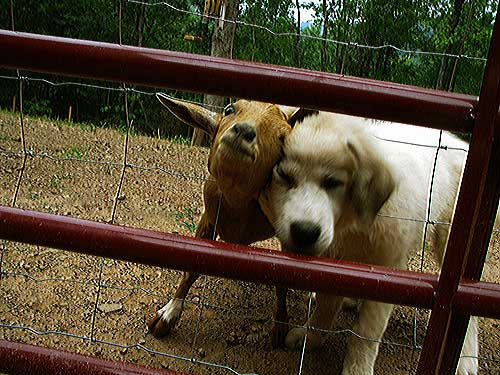 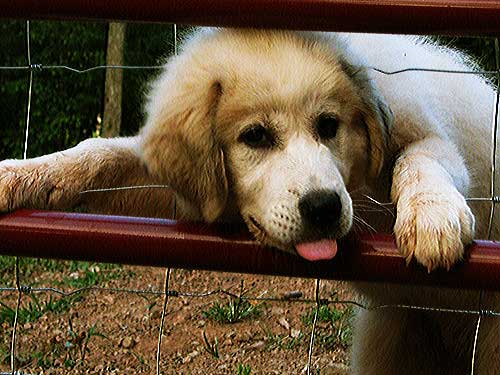