Back to the little mare– 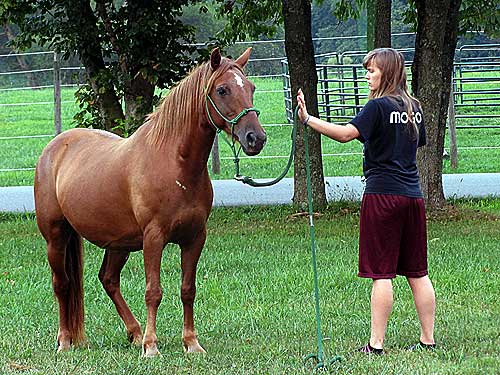 She came into rescue not long after we took Patriot and Zip, so we hadn’t seen her at that time. She wasn’t a starvation case. She was bought from a horse trader who was using her as a brood mare, which is a tough life for a little mare. She gave birth soon after to a healthy foal and he has now been adopted out. I was fortunate to be able to have her at the trainer’s this week for riding and evaluation. She knows all of her basic commands and is safe to ride. She may be a Paso/Quarter cross. (She doesn’t gait, after all, so there is probably Quarter in there.) The trainer’s evaluation is that she has been ridden–a lot–based on her behavior undersaddle. She’s calm, but she has a nice get-up-and-go when you ride her, and she does what you tell her to do. She’ll even take a verbal whoa. He thinks she’d make a good horse for us.

I want a short horse.

Big horses freak me out a little bit.

She’s so sturdy, you don’t feel like you’re squashing her. She’s 13.3 hands but substantial. (Okay, she’s a little chubby, but she just had a baby and you know how that is!) I can climb on her back just putting my foot in the stirrup, right off the ground. I like that a lot. (And no, to the comment asking if I was tall, maybe 5’8″, no, I’m not that tall! I’m 5’6″. I’m not too tall for her. I was comfortable riding her.)

I was going to foster her, but there are now other adopters interested in her so I had to make up my mind. With all thumbs up for her, I decided to adopt her. Now I have to decide what to name her. (Feel free to make suggestions. I’ve been calling her Shortcake, but I don’t know that that will stick. Morgan wants to call her Sausage, and that is NOT sticking!)

Oh, and about that milking thing….

When I first arrived at the trainer’s the other evening, there were a couple of little girls there, fresh from their riding lessons, hugging on the little mare while their mama was waiting on them to go. They just couldn’t love on her enough, and she just stood there calmly. 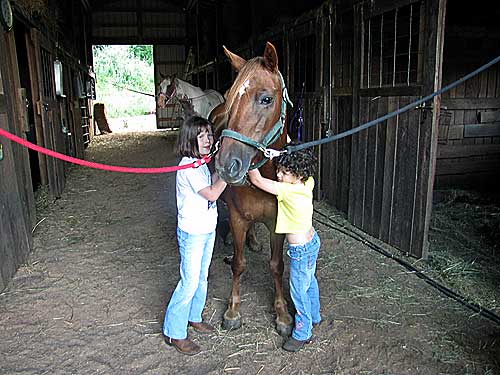 Later, we were “horsing around” with her, seeing if one could simply sling a leg over her without even using the stirrup (well, THAT would be hard, but easy with the stirrup) and then we had the idea to wonder if she still had milk, and of course, we had to check, and next thing you know I was milking her. Then I remembered I shouldn’t milk her because she’s drying up and I don’t want to be stimulating her to produce more milk. Well, there’s probably something wrong with that sentence, as in that’s not the only reason I shouldn’t be milking her. (!) But anyway! That was fun. And she just stood there, could care less, through all that. Absolutely zen.

And as difficult as this week has been in other ways with saying goodbye to Patriot, it was a comforting thing and reassuring. This little mare, she is the kind of horse I need on my farm–for me, for my family, for my other animals, for my business. Animals on a “petting zoo farm” need to be safe to pet, play, ride.