I started milking Clover a little over two weeks ago. I had never milked before, and Clover had never been milked before. And we have survived to tell the tale. I’ve gone from a tablespoon of milk a day to a jam jar to a reliable full pint every morning–thanks, in large part, to your many great suggestions!

First, we moved the milkstand to solve the problem of Clover scooting away from me and falling off the side of the milkstand. The milkstand is now placed against a fence. 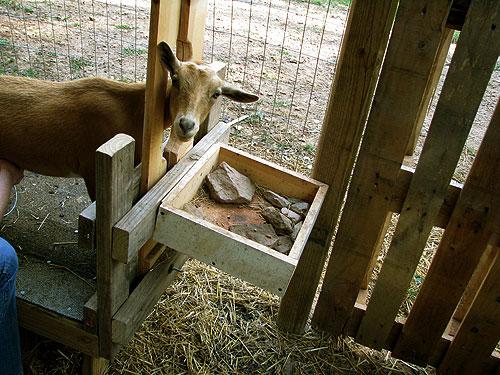 She also got more and bigger rocks in her food tray. And more food. I let her eat as much as she’ll eat. 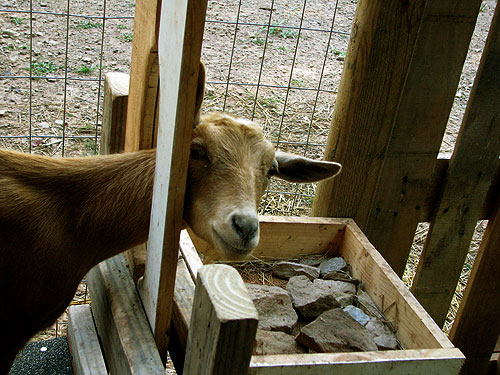 After she stops eating, I let her play with the plastic feed jug. 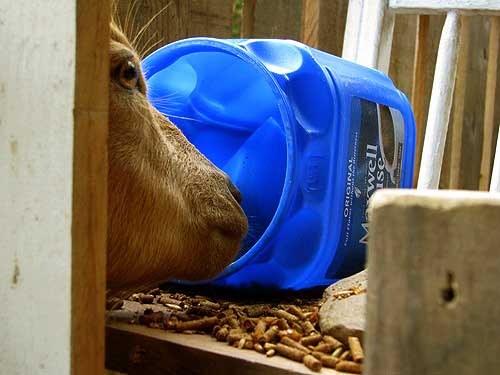 She rolls it around in the tray and sticks her head in it, so it keeps her amused a little bit longer. I buy coffee in these blue Maxwell House containers and they make great feed jugs, by the way. They’re the right size (for the number of animals I keep) to bring cracked corn out to the chickens and ducks or bring the morning feed to Clover, and the handle makes them really easy to use. And they’re free (recycled/repurposed)!

I was using a five-gallon bucket, turned over, as a milking stool, but it was too high and made me uncomfortable. We could have raised the milkstand, but finding a stool that would work seemed easier. I found this old milk crate worked just right for the height I needed with the level of the milkstand as it was. Getting the right stool at the right height for me for the milkstand makes milking a lot more comfortable. 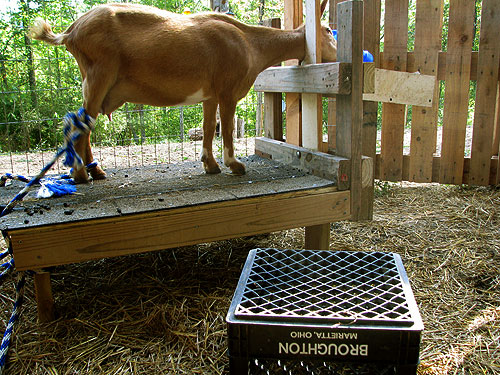 And, of course, the most critical issue was stopping the kicking. We tried hobbling her several different ways, finally settling on tying both legs, down, to the milkstand, above the bend in her legs. We use soft, wide rope, slip-knotted. Getting the knots and the tying down just right took a few tries. You can see in the photo above how she’d slipped out of the knot and it had dropped to her foot on one side (which allows her to start kicking). I’ve finally got the knack for getting it fixed tightly enough on her upper leg to keep it there, as you can see in the photo below. 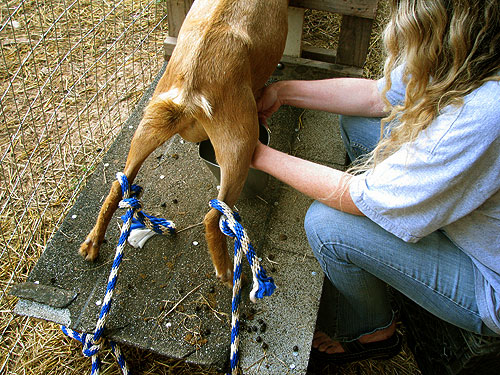 I like this hobble setup the best. For one thing, it puts her legs in the most natural position. She struggles less against the hobble in this position than she did when we tried hobbling her with one leg tied up. Plus, this way makes me feel like a kinder, gentler person. And, it works. She doesn’t struggle against it very much and she can’t kick.

I thought I finally had the whole milking thing solved and was ready to milk by myself. The first morning I went down to milk her alone, I found out she had at least one more trick for me. Somehow, she’d managed to break the tray off the front of the milkstand. The babies tend to climb around in it during the day and sometimes even nap in it, but the problem occurred overnight while they were crated, so I assume it was Clover who broke it.

Not to be deterred, I made do that morning with the tray balanced on a chair sitting on a chair, which was the only thing I could figure out on the fly to get the tray at a workable height and get the milking done. 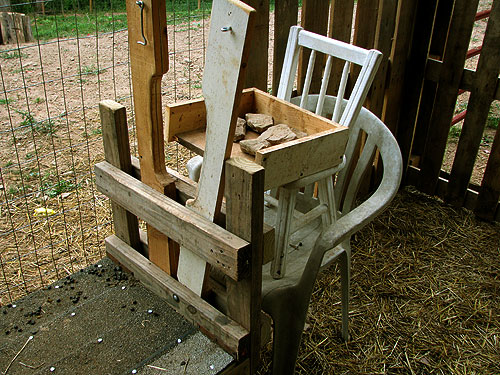 It wasn’t perfect, but it got the job done. Look at me, leaving that pail so near Clover while I take a picture. There was even milk in it! The hobble works! 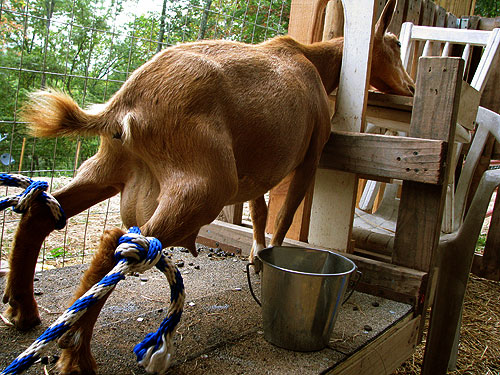 She struggles less every day, and she can no longer kick at all. Slowly, I’m getting the kinks worked out. (And the milkstand tray is reattached and braced now.) 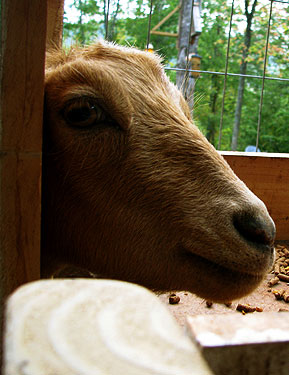 When she’s finished eating, and finished playing with the feed jug, and finished struggling, she stares back at me as I’m milking. I tell her, “You are such a pretty doe! You love to be milked, don’t you? Are we having fun or what? I love you, Clover!”

And she says, “Are you finished violating me yet, woman?”

So, well, we have a few attitude adjustments left to make. But milking is finally, gradually, becoming the peaceful, enjoyable morning interlude I imagined it could be. I have my routine down. Clover can’t kick anymore. I get her ready then sit down and start to milk, listening to the crow of the roosters and the steady squirts of her sweet, warm milk into the pail. Then I give her a scratch, sometimes a hug, let her go, release the babies, and take my pail upstairs. I filter it into a glass pint jar and am awed every day at what Clover and I have created together.