So, this morning, I was working on a post when I heard a frantic bleating sound outside. Like a sheep or goat in trouble. I ran outside to check and discovered this craziness: 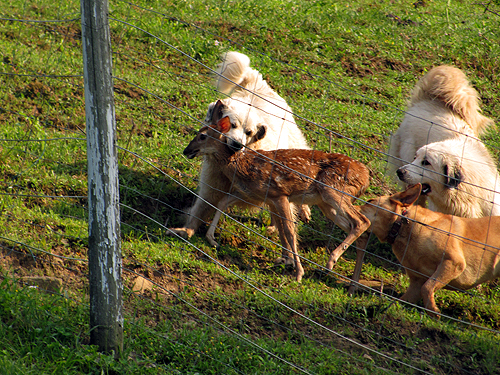 Gwennie was out to potty, and Chloe had let herself out of her field, which has been a recurring problem recently. And they had a new friend. You can see above Gwennie biting its neck and Casper biting its leg. To the dogs, this was an invader to their pasture. 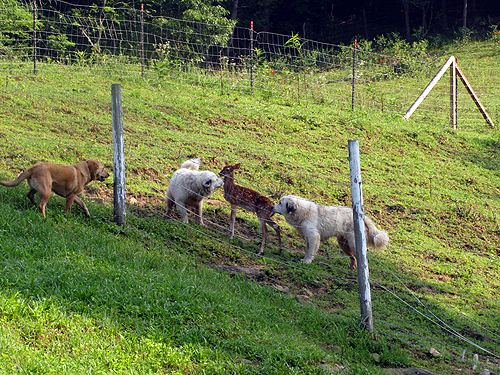 Not a happy little fawn. 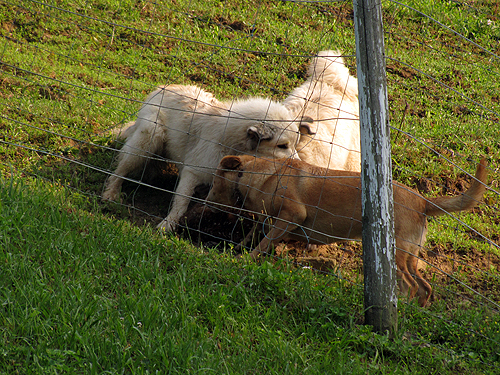 Whenever the fawn could get away from them for a second, it was haplessly flinging itself at the woven wire fencing and bleating like mad. 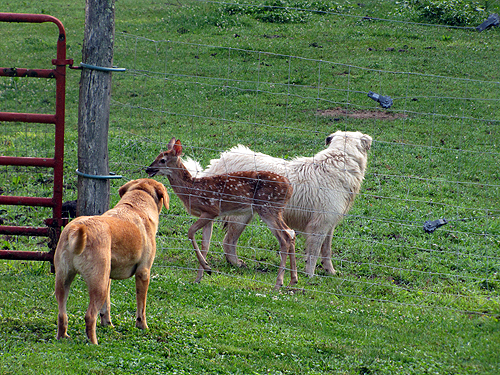 First I grabbed Chloe and dragged her, pulled her, forced her back to the goat yard, shutting that gate. 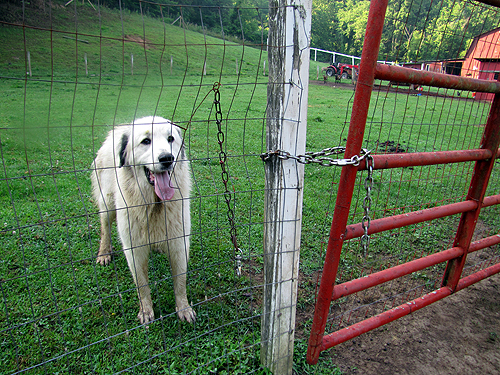 Gwennie waited patiently with her new friend. The horses came to inspect the visitor. 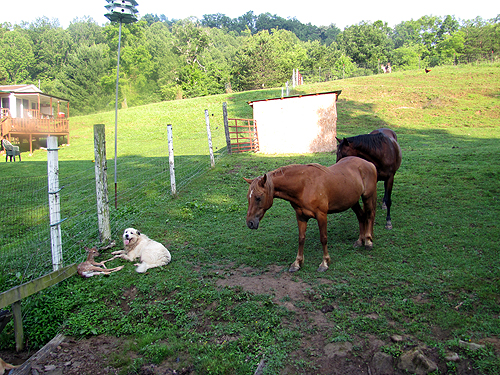 Then I grabbed Gwennie and dragged her, pulled her, forced her back to the house. Casper is a follower, not a leader, so left to himself, he’s not a problem. But by this time Chloe had escaped from the goat yard and was ready to make her way back into the sheep field to the fawn. 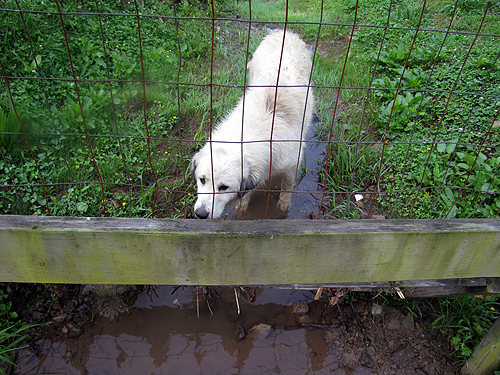 And I was already exhausted because I just got done dragging two 100-pound dogs across the farm. And the fawn was slowly walking up the creek. Which at least was heading in the right direction, out of the field. 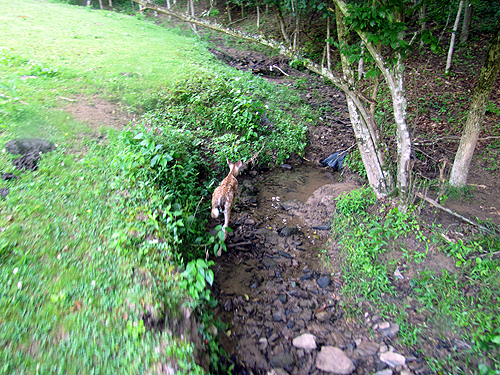 Chloe nudged her way under a fence and back into the field. I got into the creek, between the fawn and Chloe, encouraging the fawn to keep going in the right direction. I was herding a fawn. Which works pretty much the same as other animals! Except that I began to realize the fawn was exhausted. Despite the fact that it was being followed by me and Chloe, it kept stopping and sometimes sitting down.

I thought about where it must have gotten into the field. The sheep field is a lower field that connects to the two upper pastures. There’s woven wire in the lower fields and the first upper field. Maybe it jumped the woven wire. But more likely is that it came in through the second upper pasture, where it could slip through the fence, not have to jump it. No way to know for sure, but I couldn’t see it making it back up and out to the back pasture. Or even any further down the creek. And with Chloe getting out, that was going to be trouble. I didn’t want to take the fawn, but as I weighed the options, I couldn’t see a better one, for its best chance. I couldn’t see any major wounds, just small cuts. Maybe it had an internal injury, no way to know that by looking, but it might have just been shock and exhaustion.

So I picked up the fawn. It was heavy. You can see from its size compared to the dogs that it is no newborn fawn, despite still having its spots. I carried it all the way from the back of the sheep field to the back door of the house, banged on the door with my boot until I managed to wake up one of my sleeping children because after dragging off two Pyrs and carrying that fawn out of the field, I couldn’t take it another step. 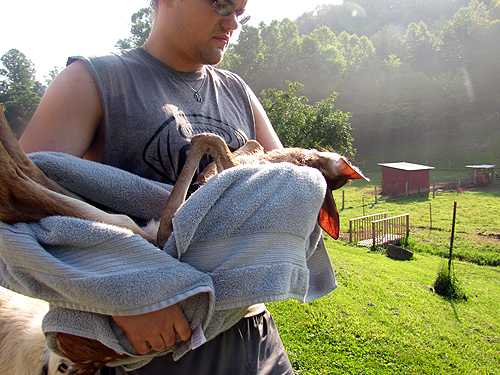 Weston got a towel, which amused me greatly since I was covered in mud and fawn fur at this point.

We put the fawn in a stall in the barn. I took a shower and called the West Virginia Division of Natural Resources, who transferred me to the wildlife division, which was voice mail. I left a message. Then went out to check on the fawn and it was dead.

You know, I have a lot of purposeful livestock on which to expend my time and energy. We eat deer meat at my house. On several levels, this entire episode seems semi-ridiculous. Especially since the fawn quickly died, despite my efforts. And yet…. I have no idea what else I could have done, or would do if presented the exact same set of circumstances again.

What would you do?