This is not the hay loft. 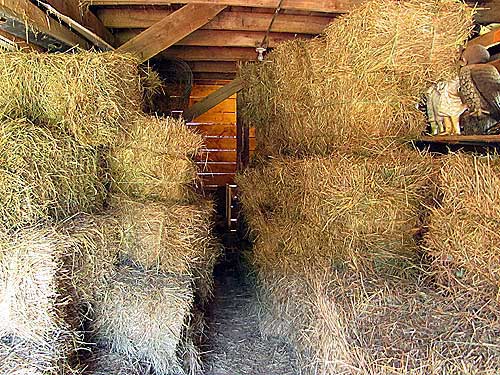 Though it looks like one at the moment! It’s the downstairs storage side of the barn (separate from the alleyway/stalls side of the lower level of the barn). I had to rearrange and organize to make room to store some of my hay down here once the loft filled. See the path between the bales?

I’ll show you where that goes! 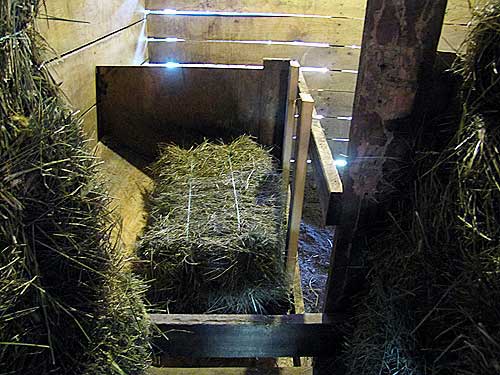 To a new hay manger! (And yes, I take the strings off my hay. That is a “demonstration” bale.)

How this idea came about: When the hay elevator was tucked under the barn, it stuck all the way under, clear to the outdoor access stall. To protect the hay elevator (and the animals), it had to be covered somehow, and Adam suggested he build a hay manger for the cows as a cover for the hay elevator. I loved this idea, so like five minutes later, he had it all constructed. (I’m only exaggerating slightly. Whenever he goes to build something, I come out and say something like, “So when you get that done–” And he says, “Turn around.” And I turn around and THERE IT IS. And I swear I was just gone five minutes. I’ve never seen anything like it.) 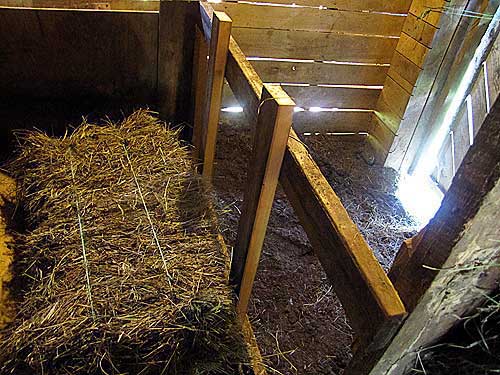 There’s plenty of room for my two cows to walk into the stall and eat, and still plenty of room for them both to stretch out, turn around, snooze, watch TV, crochet calf booties, or whatever else they do when I’m not looking. (The perspective on the photo is a little skewed from the angle. Zip, who is much larger than a cow, can get in this space and turn completely around, so it’s bigger than it appears.) I will have virtually zero hay loss with the covered feeder inside a stall (just what falls out of their mouths onto the ground). Their hay will never be wet, and when it’s cold and snowing, they don’t have to go outside to eat. I can stock them up in the feeder with two or three bales at a time. The only downside I saw was that they would stand there pooping all the time because their feeder is in their stall, but they stand in there and poop a lot in the winter anyway and I will have to have the stall cleaned out periodically anyway. The hay manger is a major savings when it comes to hay loss and was a perfect solution for the hay elevator storage. I’ll serve their hay first out of the hay that is stored right there, then later I’ll have to bring hay down from the loft. When it can be done, Adam will be cutting out a “drop” hole in the loft so I can bring hay down without using the stairs! (Unfortunately, the hay manger idea was concocted after filling the loft with 500 bales of hay, so it can’t be done right now. I’ll use out hay from the loft in the direction of the proposed “drop” hole, though, and maybe by mid-winter it can be made.)

I’m so lucky to have smart, smart farm people to help me, and I’m so, so ready for winter!