I never realized Patriot was short until a few evenings ago when we visited him at the trainer’s. I had just been petting a Tennessee Walker that is boarding there, and well, a Tennessee Walker might make any horse look short, but Patriot looked particularly shrimpy. 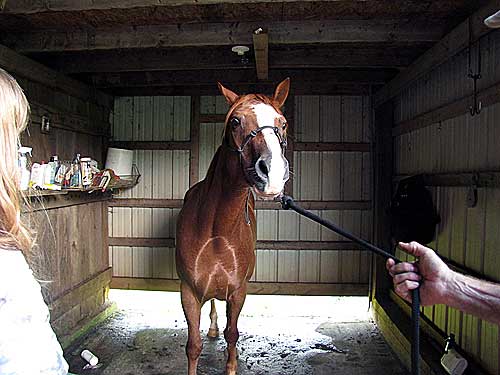 I pointed out that he was looking awfully shrimpy, which did nothing to improve Patriot’s evil eyeball. Mike got out his horse measuring stick and proclaimed Patriot to be just over 14 hands. 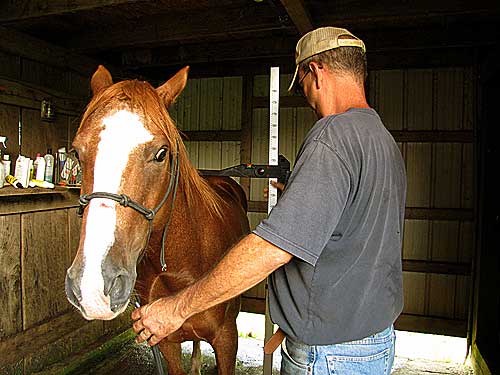 Which is not a bad thing. But anyway. Since Patriot has been at the trainer’s, he has been moody even more than usual because Patriot doesn’t like to do anything.

He threw himself down in the cross ties and broke this snap. 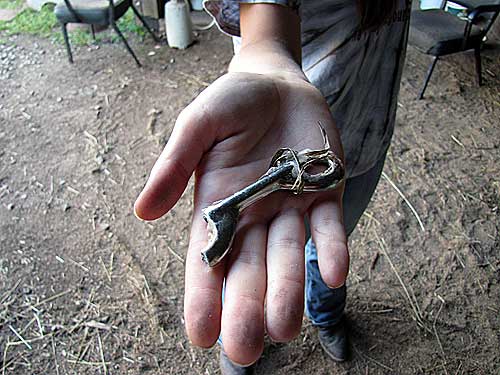 Then he busted out the light bulb in the washing stall. (Yes, he reared up and hit a light IN THE CEILING.) 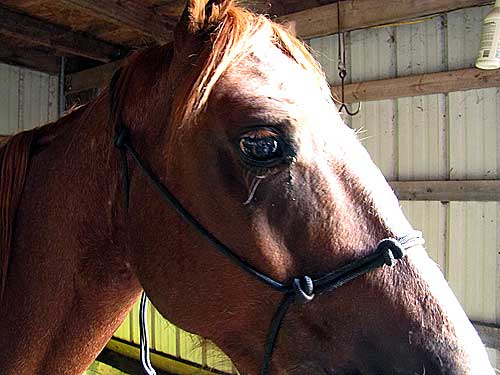 Mike thinks, in fact, that’s he not really quite broke.

With Zip, he said it was like turning a new page every day to discover what more she already knew and about which she simply needed to be reminded. Patriot is like a blank slate. He’s either never been taught much or he’s the dumbest horse that ever lived. The latter is not impossible as after he’d been there a week, he appeared to forget even what little he’d learned in a week and Mike had to start all over at the beginning again.

By the way, I got a new bit for Zip’s bridle. Mike had put the bit on for me, but when we tried it on Zip, we realized the bit fit differently than her other bit and we needed to move the buckle up on the bridle–only there were no more holes. We were talking to Mike on the phone and he said, “Get a hole punch.”

So I gave Morgan a hole punch. Like, you know, the kind from the office supply aisle. Morgan could hardly wait to tell Mike that I gave her a paper hole punch for her bridle. Mike thought this was HILARIOUS and explained that I needed, of course, a leather hole punch.

I’m glad that I can entertain people.

Then he used his leather hole punch to put more holes in the bridle so we can move the buckle up and ride Zip again. 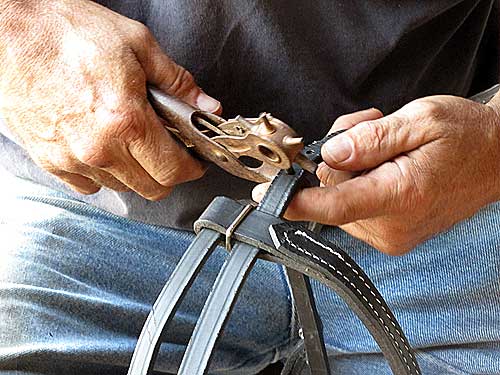 Then he took Patriot out of the barn and ran him around. 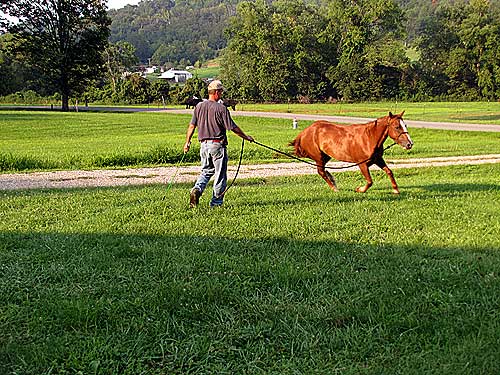 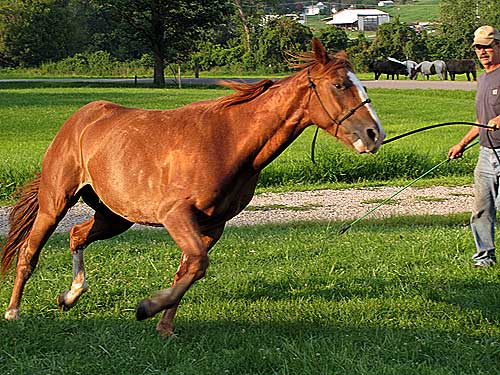 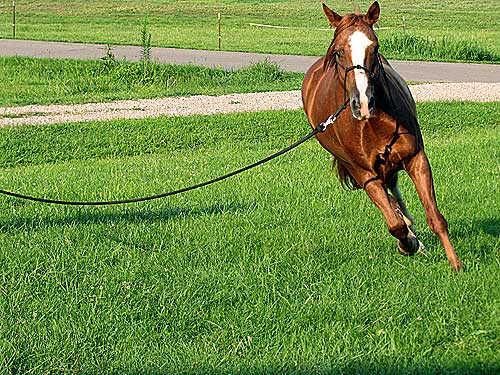 He doesn’t mind being led with a four-wheeler, though. 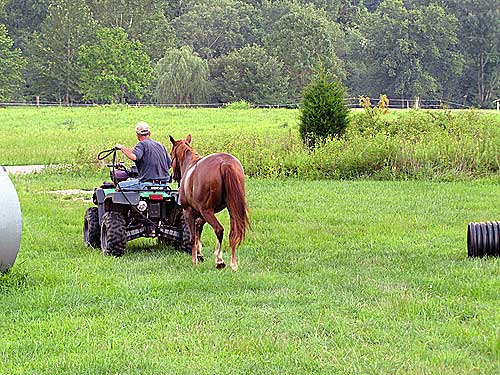 Here, Patriot is practicing walking over obstacles. Has a horse ever looked more uncoordinated? 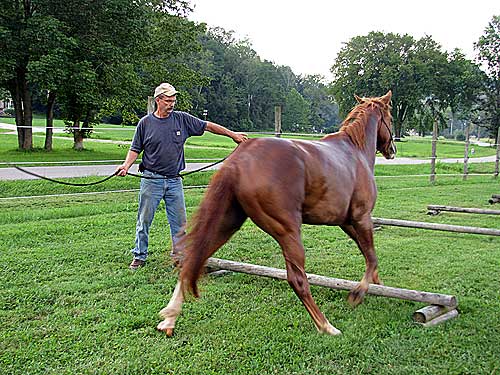 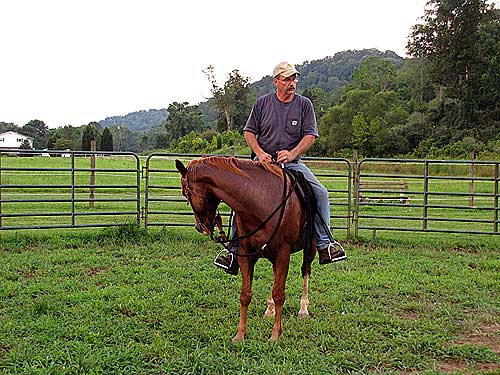 Morgan even got on his back–not going anywhere, just flexing him. 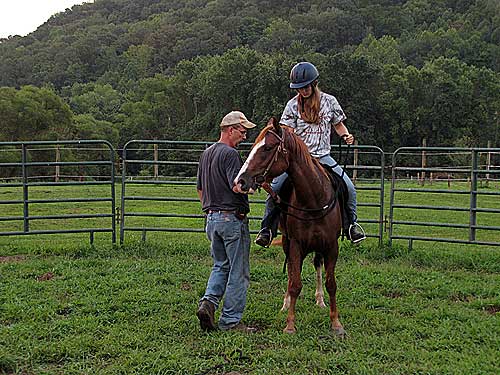 Here’s a little video of Patriot doing what he best–working.

Did you hear that last bit? Mike thinks Patriot is not actually a lost cause.

Which doesn’t sound like good news for Patriot because not being a lost cause is going to involve a lot more….. 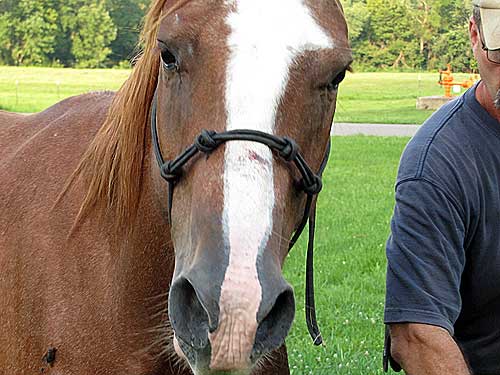