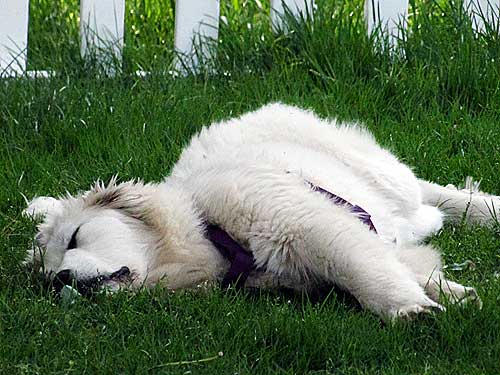 I had a fairly busy work morning yesterday. I’d been fairly busy the day before, and the day before that. I decided I was going to take it easy. It was mid-afternoon. I’d managed to come up with boxes and had gotten my wool packed ready to mail to the fiber company. SarahGrace came by to visit her lil heifer, my visiting Buttercup. I sat down in a rocking chair and wasn’t sure I ever wanted to get up.

It was warm, with puffy white clouds against a blue sky. I’d checked on the cherries in the morning. They’re growing just fine. I noticed how beautiful the front porch gardens looked. 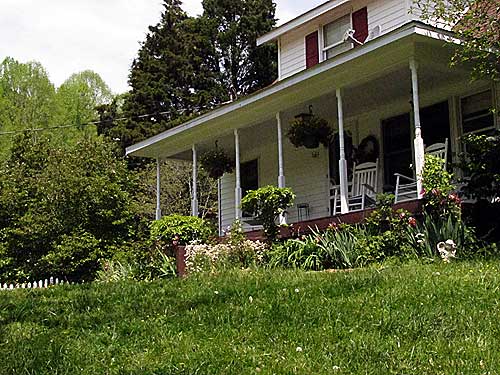 The flower gardens here are amazing. There’s always something blooming. Stuff keeps coming up, and it all blooms in ordered succession.

Earlier, I’d visited the baby and Fanta. The nursing is on a normal routine now. No more worries. 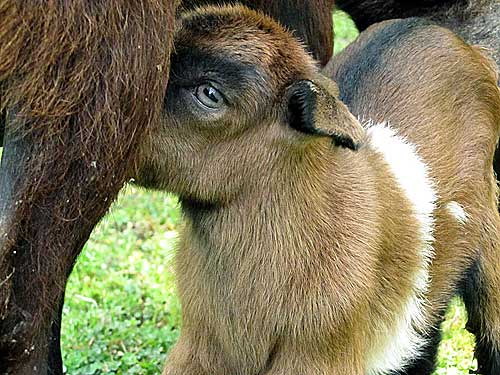 I’d promised Ross pepperoni lasagna for dinner, and I already had a loaf of bread rising. Morgan wasn’t home from school yet, and Ross had gone into town, so I had plenty of time for a little bit of relaxing before leisurely completing the meal preparations.

The phone rang. It was my go-to neighbor Jim who lives up the road past where it turns to dirt.

I said, “You’re not calling me to tell me there’s horse poop in your driveway, are you?”

Ha ha. I am so amusing. My horse, OF COURSE, is right where he is supposed to be in the back barn yard. I can even see him.

Jim: “Somebody called and told me there are two donkeys in my yard.”

I jumped in my Explorer and drove over to Jim’s. Nobody was home. You know, except Jack and Poky. They were relaxing on the bank above Jim’s driveway.

I’d brought a bucket of feed, but nobody cared. They were on vacation and they weren’t budging. I drove back home, got a rope, went back. My main plan of attack anytime I need to move Jack and Poky anywhere is to get Poky. Jack will follow Poky. To the ends of the Earth and throughout other galaxies. But there was no getting Poky. At least not by myself. And she started hovering around at the edge of the woods, nervous about my rope.

I thought about driving back to the house and waiting for Morgan. The school bus would be along in about 15 minutes. But I’d have to leave Jack and Poky to get to Morgan. If Poky headed for the hills, Jack would follow. Then I’d never find them.

I sat down on the grass next to Jack. He munched away on my bucket of feed. I casually slipped the rope around his neck and he still didn’t notice. Then I picked up the bucket and said, “Let’s go!”

Of course, I was leaving my Explorer behind. I’d have to walk back for it. I dragged Jack onward, feigning confidence while I surreptitiously looked over my shoulder at Poky. She was following! Meanwhile, two things were weighing heavily on my mind. What about Buttercup? The lil heifer, who was just visited by her people mama an hour ago, was in the same upper pasture from which Jack and Poky had just escaped.

The school bus was coming. Just how much was that going to freak out Jack?

The school bus turns around where the road turns to dirt just past my farm. I slowed Jack down a bit. Poky followed behind about 30 yards. I could hear the bus. I stopped. Jack stopped and turned, started kicking. I danced around in the road, one shoe flying off, trying to stay out of his hooves, then dancing around on the gravel trying to get my shoe back. Without getting kicked.

I could hear the bus beep beep beep as it turned, then the noise fading out as the bus headed back up the road. I started Jack off again at a fast clip. I kept looking back to check on Poky. It was the longest walk ever. I was afraid to stop moving, afraid Jack would decide to act more like a donkey and dig his heels in. I had to do a steady pull as it was, holding on tightly, keeping the rope short. There’s no doubt about it–Jack is stronger than me if he wants to be. It was all me and the rope and Jack. There was no room in my head for anything else.

Meanwhile, inside the house, Morgan changed her clothes then looked out her window.

“And,” as she told me later,”THERE’S MY MOTHER WALKING A DONKEY DOWN THE ROAD.”

You’d think she’d have rushed out to help me.

I got to the gate, waited for Poky to catch up while Jack snorted around, irritated. At this point, I was pretty amazed that he’d let me walk him down the road. From now on, Jack is my main man. I need the donkeys to go soemwhere? GET JACK. That Poky, she’s a pistol.

By this time, Morgan did show up at the gate and we got the donkeys on the right side of it and shut them in. Then I said the words any 16-year-old who is in drivers ed but has never gotten to touch the wheel of their mother’s car would like to hear: “Go get my car.”

My judgment was slightly impaired by the tiredness.

I headed off to find Buttercup, discovering her as far back in the upper pasture as she could be, innocently taking a nap under a tree, and Morgan drove the quarter-mile from the neighbor’s house with my car without calamity.

I put everyone in the barn yard (including Buttercup), baked my bread, somehow miraculously still made a pan of lasagna, and called the fencing man to come back to look at the horse field AND the upper pasture.

And went to bed. Still feeling as if I was pulling Jack down the road. Like my head was still there.

I’m sure relaxation is over-rated. But I’d sure like to try it sometime!