It’s been a long road this time around getting cows bred. Moon Pie is ready to be bred–she’s 15 months old. Dumplin has been ready to breed for a long time–she’s 2 1/2. Glory Bee hasn’t had a calf since Moon Pie. I’ve tried artificial insemination a few times. It didn’t work for me. It’s difficult for me to get the timing right between ordering the semen, the semen arriving, and getting the vet here. I tried. It didn’t work, and it was too expensive to keep trying that method. Borrowing a bull has been difficult, too. I haven’t been able to find someone willing to let me borrow one, and the farmer who had the last bull I borrowed (Moon Pie’s papa) sold out his cows. I could take my cows somewhere else to be bred, but Glory Bee is a milk cow plus I use her for workshops. I can’t send Glory Bee away. But! Finally! I found someone all the way in Ohio who would bring me a bull to borrow.

And he’s here! He’s a Dexter. (Not a miniature Dexter, a full-size Dexter.) Dexters are a multi-purpose breed, used for draft, milk, and meat, so I’m excited about him. If Glory Bee has a girl, I’m thinking of training her up as a future milker. Or Moon Pie, if she has a girl. Not so sure about Dumplin. Dumplin favors her Limousin daddy so much, I don’t know if she’d deliver a good milker. But, we will see next spring when they should ALL be calving! 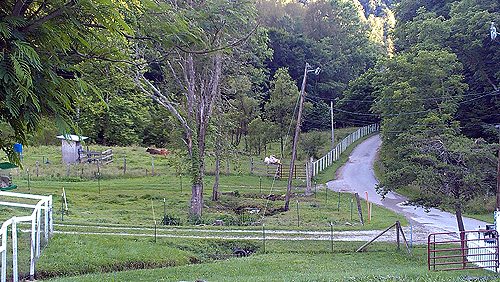 As you can see from the picture above, the bull is favoring Dumplin right now, and Glory Bee and Moon Pie are giving them their space. (That’s Dumplin and the bull to the left, Glory Bee and Moon Pie to the right.) He’s been sticking close to Dumplin since soon after his arrival. I think Dumplin must be coming in to heat. When he was unloaded from the trailer, Glory Bee literally started kicking up her heels and running circles. I haven’t seen her that frisky since she was a calf! She was thrilled to see her new boyfriend! And happy to share with Dumplin and Moon Pie, who also started running circles, kicking up their heels, showing off for Bradley. That’s his name–Bradley. He’ll be here for at least two months. After everyone calmed down and they showed him around his new digs, he took Dumplin’s hand and they went off together for some alone time while Glory Bee and Moon Pie settled in to wait for their turn.

I’ll have more pictures of Bradley tomorrow–I’m laid up right now (see here) and couldn’t get out there to take pictures after he was delivered yesterday. I’ll get more, and better, pics as soon as I can. Glory Bee and Moon Pie are keeping their distance and being considerate, but I can’t wait to invade Dumplin’s private romantic moments, you know it!