Yesterday, I went to Woolweaver Farms in nearby Gandeeville. I met Joe last fall at a Women in Agriculture event in Spencer and he told me about his Tunis sheep then. Tunis sheep (also known as Tunisian Barbary) are an ancient breed–-they are the “fat-tailed sheep” of the Bible. They have cream-colored wool with cinnamon-red faces. (The lambs are born tan or red and the body wool later grows out creamy, leaving the red faces.) Not surprising for an ancient breed, they’re multi-purpose. They provide flavorful meat and wool suitable for spinning and crafting, and as a bonus, they’re good milkers. I’m not sure if I want to milk sheep, but you know me, I might try anything, so the overall potential of Tunis sheep is intriguing to me. The pure Tunis sheep are beautiful and interesting, and they would make fascinating crosses with Annabelle and Crazy. They also cross exceptionally well with Suffolk, and I have my Suffolk, Ebby, now, too. 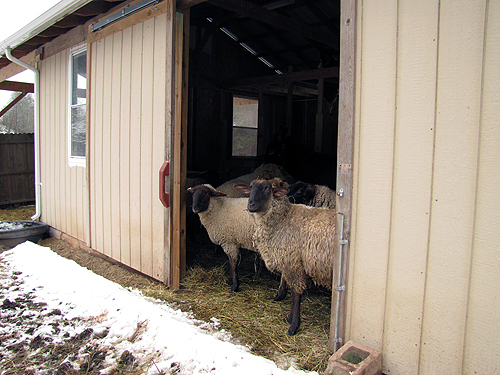 Joe’s wife is one of Morgan’s teachers at the high school. She asked Morgan the other day if we wanted a bottle lamb. Morgan told her NO. Of course. If you can’t put a saddle on it, Morgan doesn’t really want it! Fortunately, they decided to ask me for a second opinion and I couldn’t say YES fast enough.

Morgan wasn’t too surprised when she got home yesterday and I was sitting here with a bottle lamb on my lap, ha.

But first! Let me show you the lovely Woolweaver Farms. They have Belted Galloway cattle. 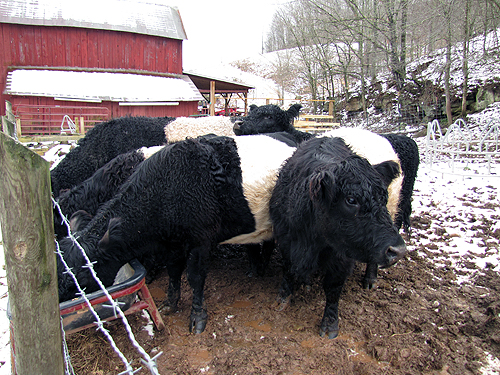 One was getting ready to give birth, even had feet sticking out! 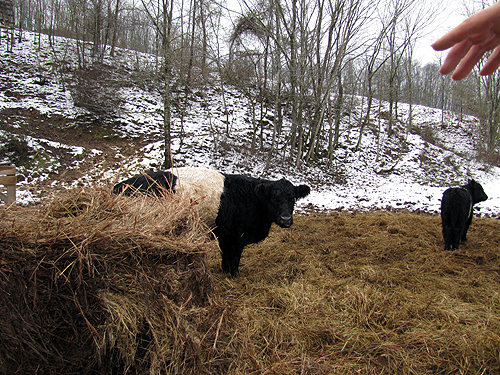 I wanted to just camp out and wait for the action, but I had brought Adam with me, or he had brought me. Woolweaver Farms is on a back road, which was snow-covered, and I only wanted to go so far as the main road intersection to their farm. I am not a happy winter driver, especially on a back road. After work finished here yesterday, I followed Adam to the intersection where the road turned bad then hopped in his truck for him to take me the rest of the way. I needed to get on with business so that I could let him go home. 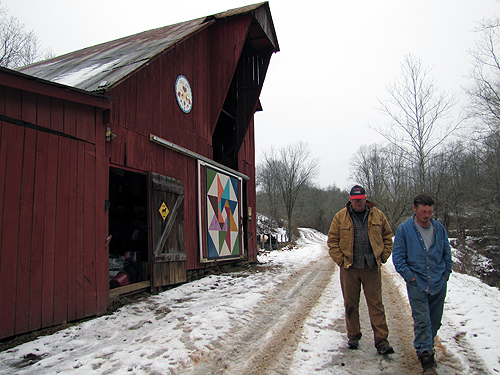 Also at Woolweaver Farms, along with a bunch of chickens, they have a rescue horse, a couple of ponies, and a donkey–a big one! Jack would be scared! 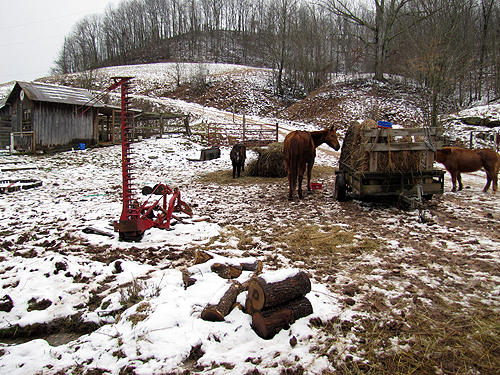 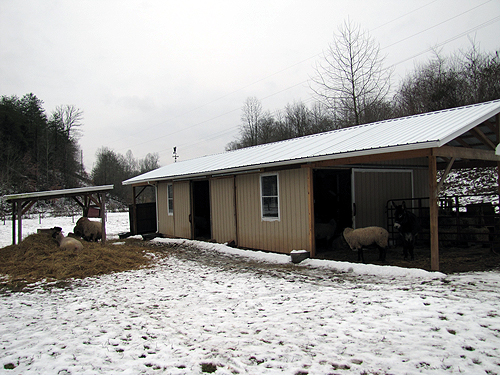 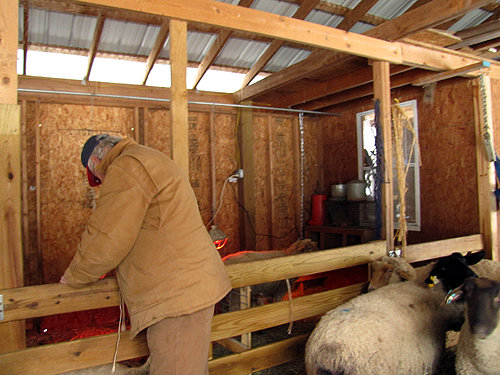 Adam said, “You often sound like you just dropped down from Mars.” 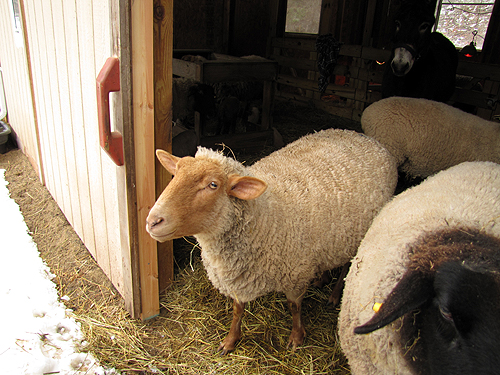 Anyway. They have Tunis, Suffolk, and Tunis-Suffolk crosses, but I was there for a little purebred Tunis ram lamb. He was rejected by his mother, poor baby, and was in a jug (the term for a pen for a new mama sheep with her babies) with another sheep (not his mother) because she was nice to him at least and he could play with another lamb there. 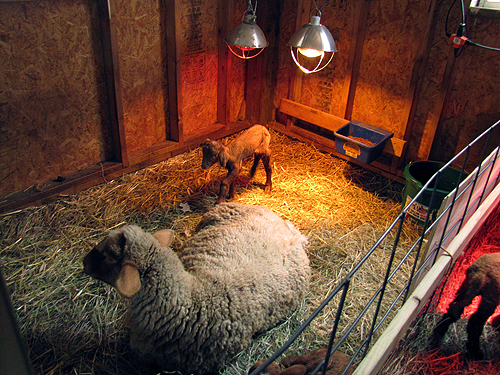 I picked him up and took him inside the house where Joe let me do a bottle feeding for practice before leaving with my new adopted baby. I left with a bottle and a bag of lamb replacer milk, and a box they’d been keeping him in when he was in the house. I stopped by the store on the way home for newborn diapers. Several people asked about the diapers– 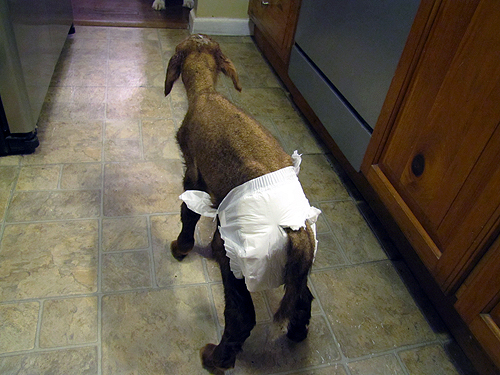 They are newborn size and I cut out a hole for the tail. 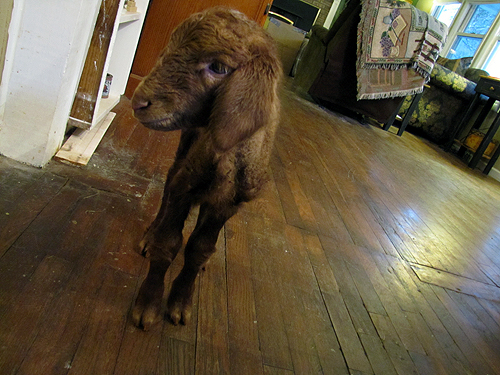 Home, I found he could climb out of the box so he is freely roaming and napping in warm corners. Gwennie took to him right away. 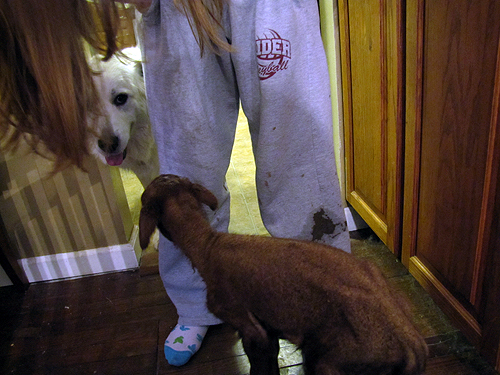 He’s eating at least every four hours–and needs to. 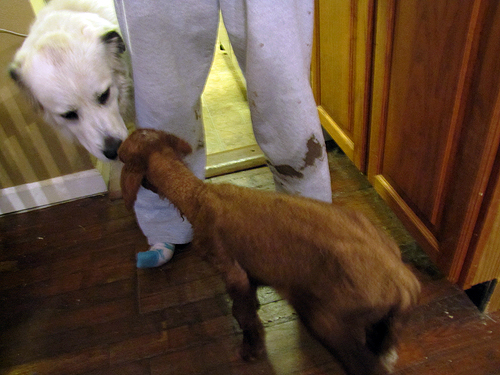 He’s a little scrawny and needs fattened up. I was up in the middle of the night for a feeding–I let him sleep in my room. I’m not sure how long I’ll keep him in the house–at some point I will move him to a barn stall. I’m expecting goat babies soon so he will have playmates eventually. And I’m also hoping I will be getting two Tunis ewe lambs from Woolweaver Farms this spring. 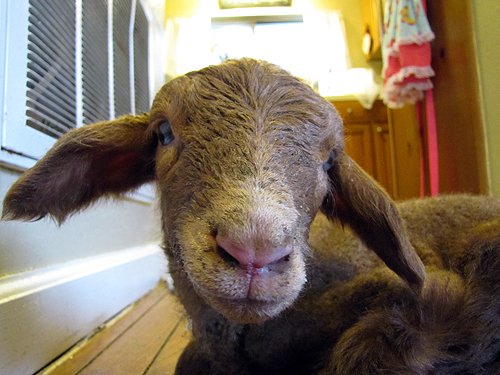 In the meantime, I have a bottle baby in the house!