When Coco starts peeing, you better get out of the way because that stuff is movin’! 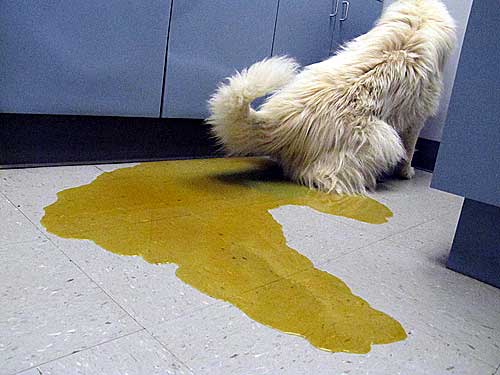 I took Coco’s harness and leash with me to visit her yesterday. I was ready to demand my dog, break her out, head for the hills. Okay, not really, because then I remembered I was going to be out of town all day on Wednesday, which meant I really shouldn’t take her home until after Wednesday. Bummer. But I talked to the doctor, and they are very pleased with Coco’s progress. 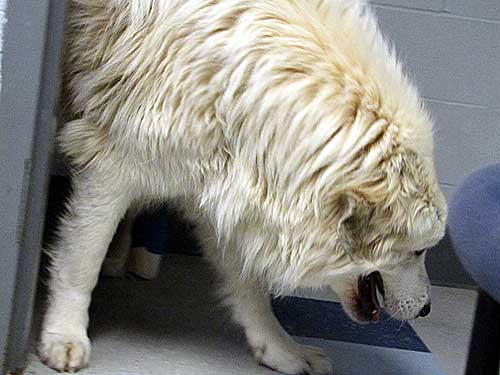 I didn’t get a really good photo of her yesterday because she was either nosing at the door as if she wanted to figure out a way to open it herself and make a run for it or she was right up in my face. 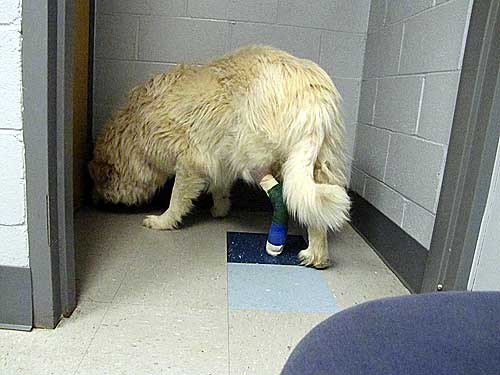 Do notice that she is putting her leg down more, which is a good sign. She doesn’t put weight on it for more than a second, but she wasn’t even putting it down before. She is, of course, somewhat hampered by the bandage, especially because it wraps completely around her paw. The reason they started wrapping her paw also (there is nothing wrong with her paw) is because moisture was getting in that way.

She is healing well and they are re-bandaging her only every other day now. I’m going to take her home on Friday. Yay!!!! She will be restricted for awhile. She will have to stay in the house, only taken out on a leash to use the bathroom. I’ll be out of town on Wednesday, which means I won’t be here to take her in and out, and she’ll be having her bandages changed on Monday/Wednesday/Friday, so I decided that I should wait out Thursday and take her home on Friday after her bandage change–if I took her home Thursday, I’d have to turn around the next day to take her back for the bandage change. (It’s a bit of a trip to go there, so while I’m eager to take her home, it’s just more sensible to wait until Friday.) For at least another week or two, I will be taking her three times a week for bandage changes and checks. This will taper off gradually until she’s completely healed.

Her prognosis–we just won’t know for awhile, but it’s a good sign that she’s starting to put her leg down. Until the bandage is off and remains off, she won’t really have the leeway to use her leg normally, and it will take time for her leg to strengthen since she won’t have been using it for weeks. It will still be months before she really gets back to whatever her new normal is, but things are looking more optimistic than they were a week ago as she is trying to use the leg.

I’m not sure how long I’ll have to keep her in the house on restricted activity. The risk is of her wound re-opening, so she doesn’t need to be gallumphing around in the goat yard until she’s firmly healed. Chloe is currently in the goat yard most of the time, so when Coco comes home, I’ll leave Chloe there and bring her to Coco in the house for an introductory visit. I’ll let Coco lead the way from there as to how much time she wants the little whippersnapper to spend keeping her company in the house. And in the beginning particularly, I’ll have to watch whether Chloe gets too rowdy, so her visits may be limited. Trouble is, Coco is full of energy, PERFECTLY FINE–except for her leg, so I expect she’s going to have some serious antsy pants once she gets home and is stuck in the house.

She’s also, by the way, a significantly large animal to keep in the house, possibly for several weeks, so this should be interesting.

But–the next time I go to see her, I’m not leaving without her!

P.S. Chloe has been such a joy here–and a pain, of course, because she IS a puppy. 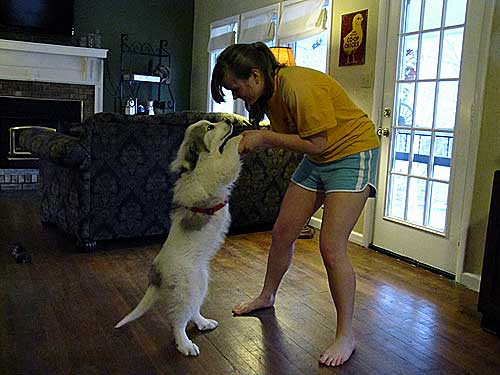 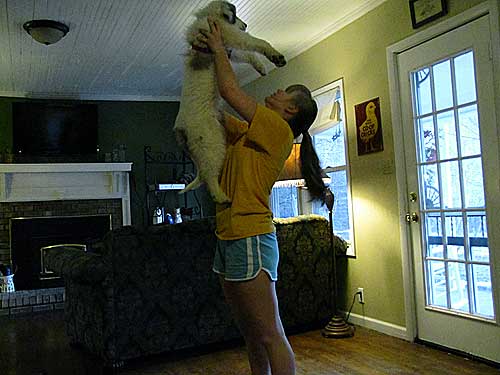 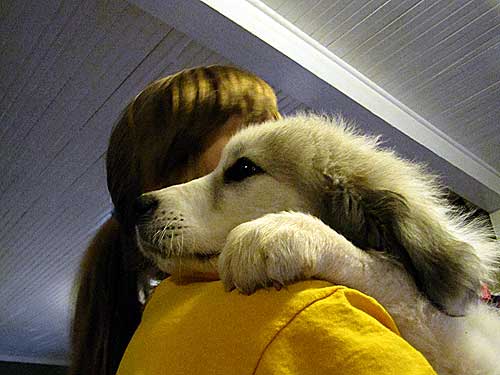