We’ve been busy on the farm the past few days, doing things that needed done and catching up on a few things where we were behind. Such as sheep shearing. Those poor sheep were still wearing their winter coats and it suddenly got hot here. The donkeys’ hooves needed trimming, too. It was time for lots of wranglin’. And! I have a surprise, something unexpected at this point. But we’ll start with the goslings. (Surprise later.) They were way past ready to get out of the brooder and into some sunshine and romping room. I decided to take them to the chicken house/yard first as an intermediate move to their eventual home in the pond yard.

I set off to clear out the chickens. I didn’t want the chickens to feel “crowded” by the new arrivals, I have way too many eggs as it is, and it’s warm now, so I don’t mind clearing the chickens out of the hen house to give the goslings some time to grow there in safety.

Before I could get to the chicken house, I came across this: 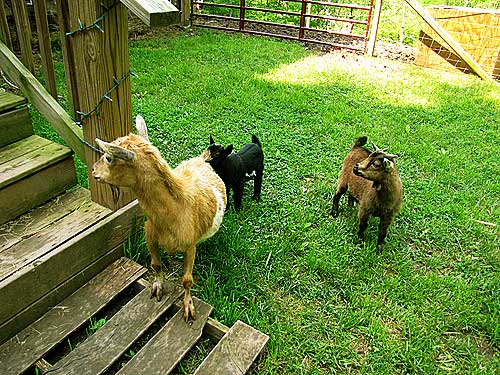 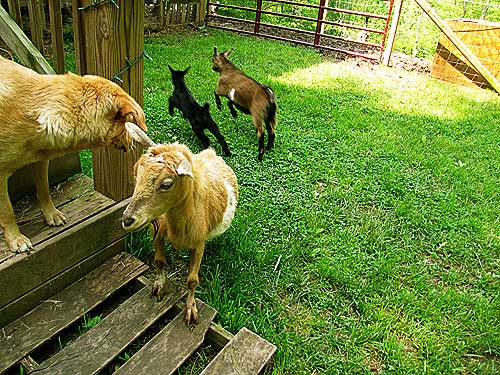 Casper helped in the corralling. Or not. They were just coming up for a cookie….

Once Clover, her baby, and Dr. Pepper were back in the goat yard, I cleared out the chickens. They were so excited. These hens went into the chicken house this winter and haven’t been out since, so everyone was happy to take a stroll. 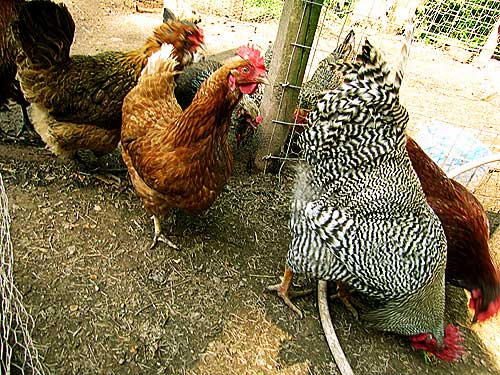 Then I wrangled the goslings and got them in there. The big world! It is so scary!!!! And they are so cute!!! 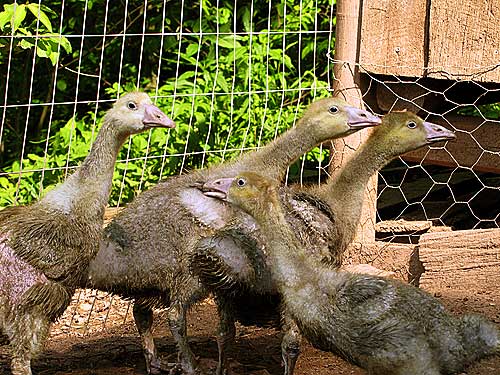 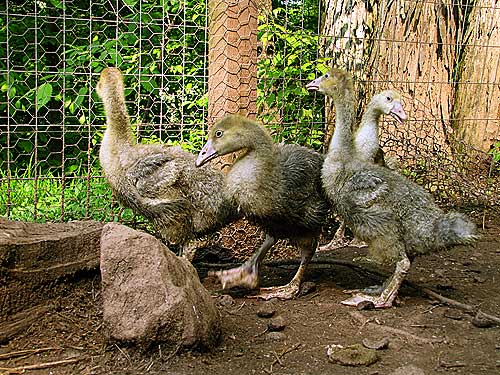 They move in a group. 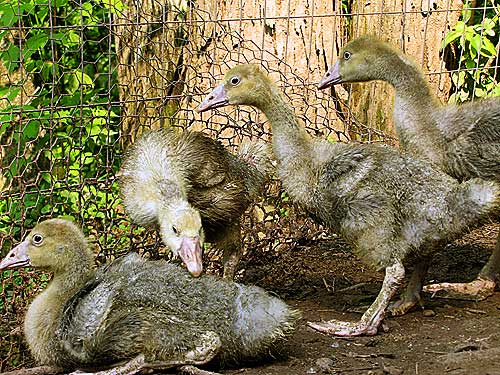 It took them a little while to figure out where the food and water was, but they did. It’s so good to see them out in the fresh air and sunshine, getting some exercise. It’s always tough keeping young ones in the brooder, but it’s for their safety. I’m always so glad when I can take them out! 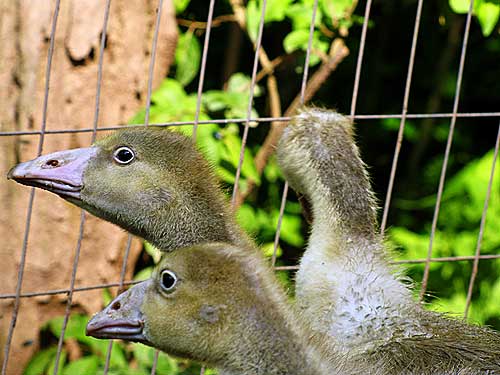 Naturally, no sooner were the hens out than they wanted back in.

A handful of the more persistent ones flew back in. The chicken house/yard isn’t crowded, though, and everyone seems to be getting along fine. The goslings will stay there for a few weeks, until they’re big enough for the pond yard, then the hens will have their house back to themselves.

Then it was donkey wranglin’ time! The donkey hoof trimmer arrived. Jack first. 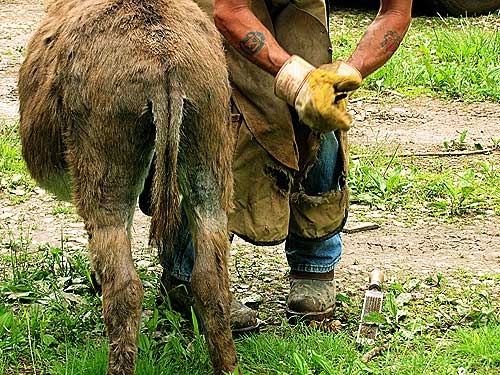 To be trimmed, they are taken one at a time out of the field. I asked the hoof trimmer why he didn’t just trim them in the field, skipping the whole wranglin’ part, and he said he didn’t like getting kicked. Apparently, if you trim the donkey around other donkeys, there can be some upset. (Especially when holding down and trimming a girl donkey in front of a boy donkey. The boy donkey thinks you’re stealing his woman. If he trimmed Poky in front of Jack, Jack would be climbing on his back trying to tackle him to the ground.)

It’s bad enough trimming the girl donkey when you take her out of the field! 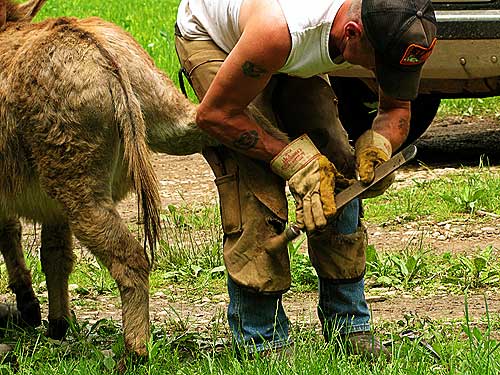 Jack, while Poky is getting trimmed, pacing and distraught. 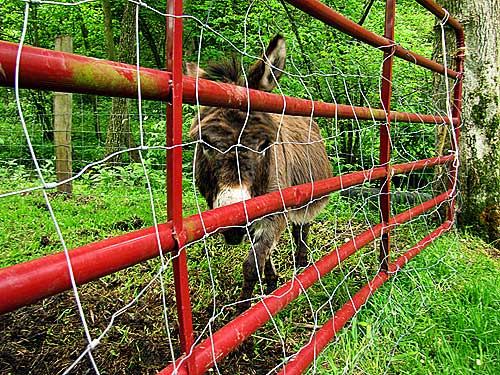 Moaning for his beloved. 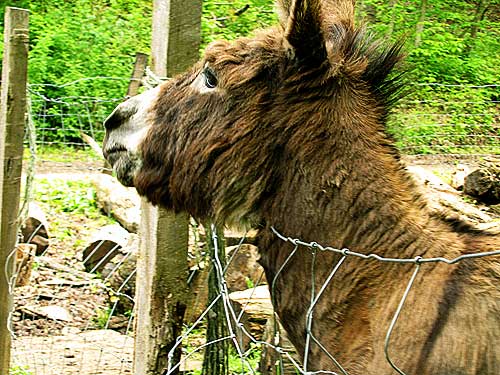 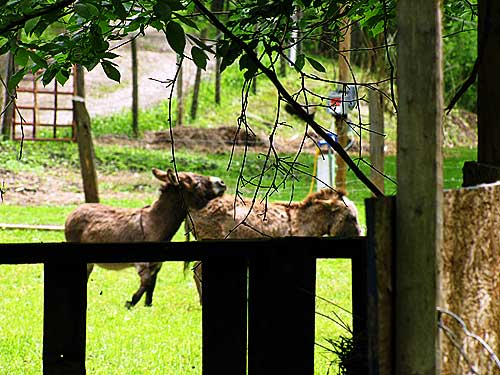 And so close together! See Jack’s ears behind Poky? 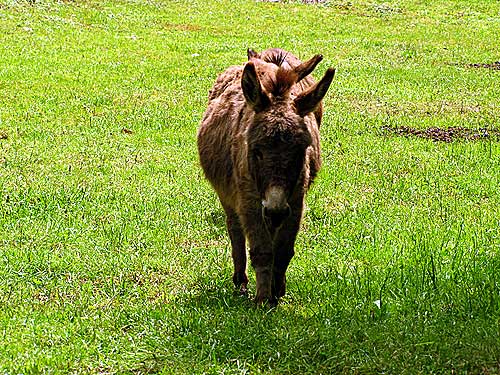 She isn’t getting a step away from him! Ever again! He almost lost her! She was away from him for 10 minutes! It was terrible!

And!! The donkey hoof trimmer thinks Poky is pregnant. Not sure how far along, but she’s along. But! We’ve been expecting that since they’ve been together for nearly a year now. (Donkeys are pregnant for 11 months, so she could have a baby any time now.) So, since that is expected, it’s NOT the surprise secret!

On to the sheep wranglin’! 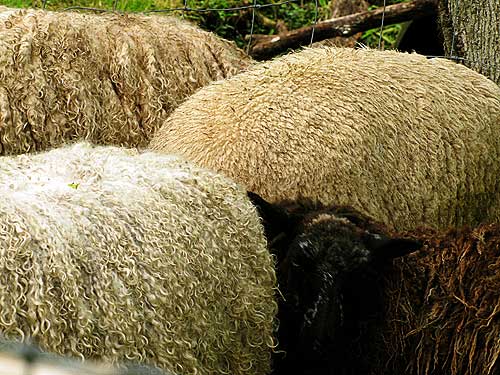 A section of the field was temporarily fenced off to make a holding pen for the shearing. 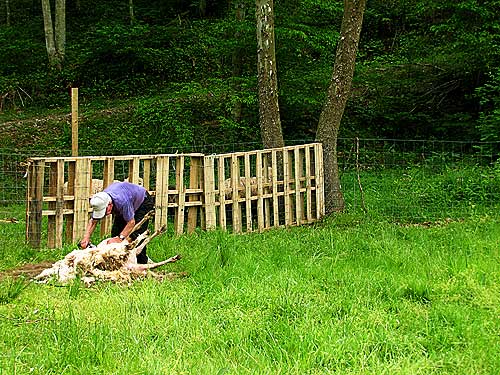 Mr. Cotswold was brought out last, because once they are sheared, they are released to the field and you just never know how Mr. Cotswold is going to behave. He’s an incorrigible rake.

Off came their coats, one at a time. 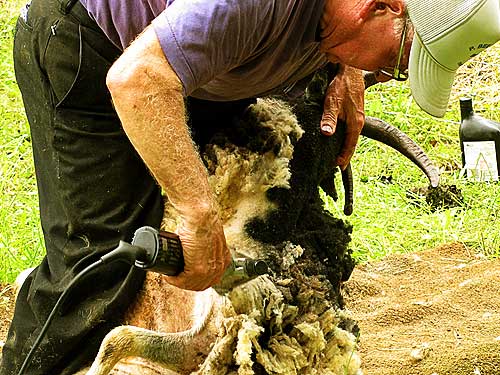 Our sheep shearer has been shearing sheep for over 50 years. He used to shear 3000 a year back in the day. He could shear 12 sheep an hour. He’s not that fast now, but then he is about 250 years old. Or something. I’m always amazed that he can handle the sheep. 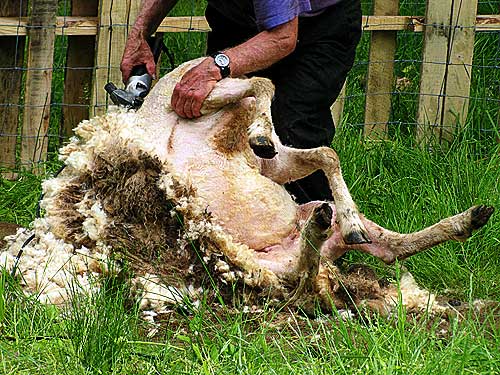 After shearing, they each ran across the field into the tall, tall grass to escape the indignity and hide their nakedness. 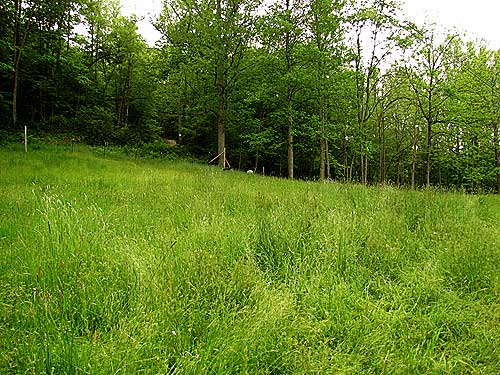 I was particularly interested to see the yearling after she was sheared. She is half Cotswold, half Jacob. She has dark wool like the Jacobs (but not spotted), and it’s long, curly wool like the Cotswolds. (She has no Jacob horns.) I wondered if her body type under all that wool would be muscular and meaty like the Cotswolds or light and dainty as a Jacob. 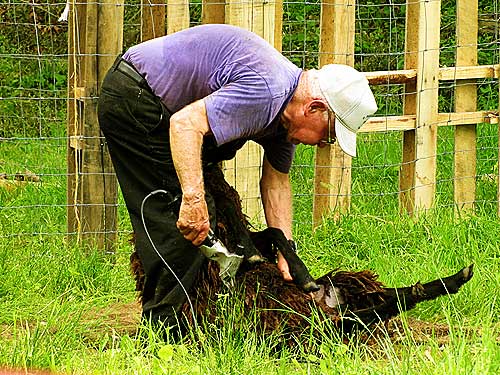 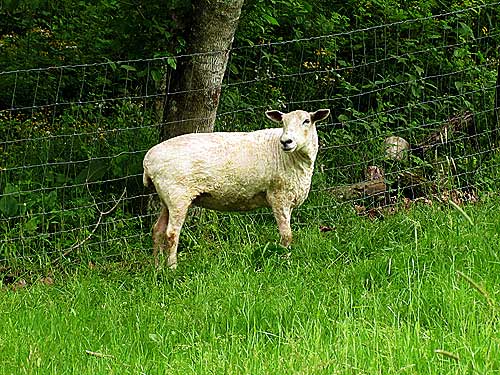 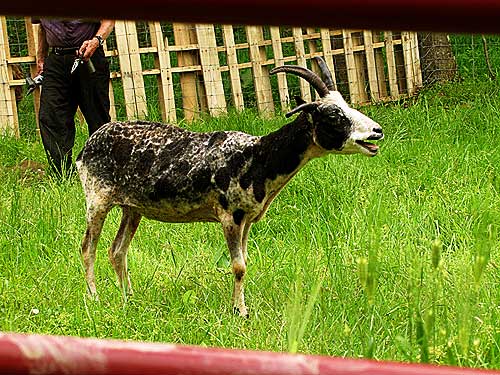 The half-breed yearling, sheared. (Yes, that’s a cut on her side from the shearing.) 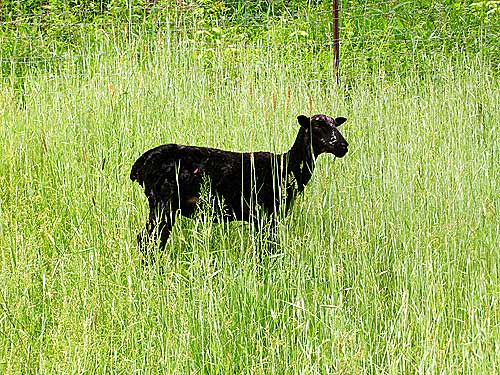 I think she’s kinda in between. We sell the wool (want some? email me at [email protected]), but I will be keeping hers. Under all the wool, she looks black now, so I wonder if her wool will be all-black next year. This was her first time shearing, so that was her lamb wool.

And now for the surprise! We have had lambs every year in late winter. The ewes go into heat in the fall. Once we get past that time frame, I don’t expect lambs any more for the year. Except…. Well! Somebody has been keeping a secret. Somebody who is a youngun on her first heat cycle and doesn’t quite go along with the group……

After getting up close and personal while shearing Annabelle, the shearer announced that she was bagging up and he expected her to lamb within the next few weeks!!! 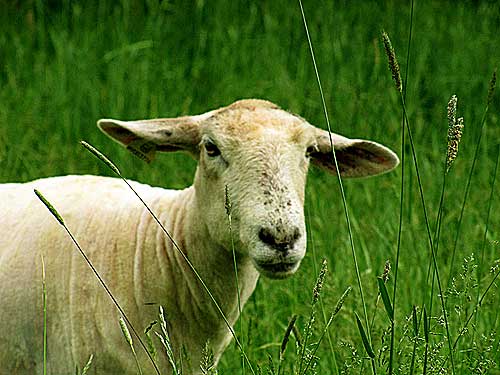 And we’re not going to lose these lamb(s) to the wild beasts, as happened with our last lambs a few months ago. I don’t want to take Annabelle out of the tall, tall grass just yet because it’s so good for her, but as soon as she delivers, she and the lamb(s) will be coming up to the goat yard at the house.

We have a puppy watch!