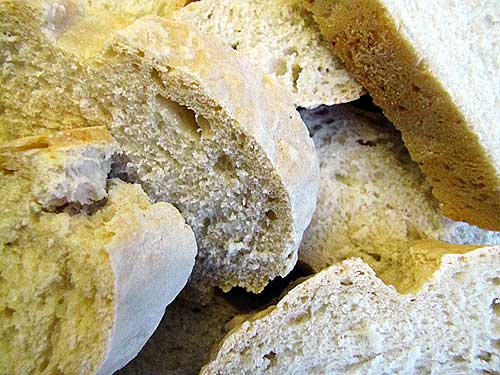 “Artisan” may be one of today’s most misunderstood (and mis-used) foodie terms. The word “artisan” is used to sell cookbooks, foodie blogs, TV food shows, and, of course, bread. In other words, it’s a marketing term. Artisan bread means hand-crafted, rather than mass-produced, bread. Its most (only) functional use is in differentiating bakeries offering hand-crafted bread vs. mass-produced so that the consumer knows what they’re buying and understands the higher price for that quality. Many times, those artisan bakeries are using hearth ovens and preparing a delectable assortment of whole grain breads, and most particularly the popular uber-crusty breads, but those details don’t make up the basic meaning of the word. Artisan means hand-crafted and is properly used by crafters (of all kinds) marketing their handmade work. As cooks and bakers at home, unless we’re using box mixes, everything we make from scratch is by definition artisanal.

Depending on what kind of great-grandma you had.

The term has been swiped from small artisan bakeries and manipulated by internet foodies, cookbook authors, and Food Network hosts into something that carries a certain cache that, of course, the mere “homemade” word can’t offer. Homemade isn’t good enough. It must be artisan. That’s so much fancier. And trendier.

I’m going to tell my chickens about it because they lay artisan eggs and don’t know it.

If you’re baking homemade bread, you’re already making artisan bread. If you have a hankering to make a special kind of bread, you don’t need an artisan cookbook. Save your money. If you’re yearning for the specifically popular super-crusty “artisan” bread, I’m going to tell you how to make it. 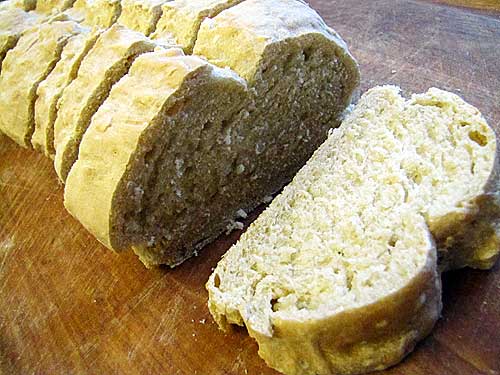 And as long as we’re using the word artisan, we might as well say baguette while we’re at it. (We feel even more important that way!)

So-called artisan breads are usually made with either sourdough or a sponge, though this isn’t absolutely necessary. (Remember, artisan means hand-crafted.) The sourdough or sponge association hails back to where “artisan” bread comes from–the past, before commercial packaged yeast was widely available as it is today. You know, back when all bread was homemade bread and they’d never heard of the word artisan. Artisan bakeries often offer up a variety of Old-World style breads made of few and simple ingredients, such as baguettes, ciabattas, focaccias, and so on. Artisan cookbook authors and foodies especially like these breads because they get to use French and Italian words, which adds to the fancy aura. Grandmother Bread is an old Americana “light bread” but that’s not nearly as tantalizing to the tongue. Or to sales.

As for that crispy crust, artisan bakeries often use hearth ovens, which yield a result difficult to replicate in the typical home oven, but if you are looking for that particular crust that you find when you buy a loaf from such a bakery, try a baking stone. For the truly crispy crust, add some steam. None of these techniques are new. In fact, they’re quite old. Artisan loaves are often sold in round or other shapes because back in the old days, they didn’t have loaf pans. The oft-seen slash across the top is no gourmet technique either–it comes from the days when communities or villages shared ovens. To recognize their own loaves when they came out of the oven, each person would mark their bread with their slash, like their signature, to be sure they took home the right loaves. 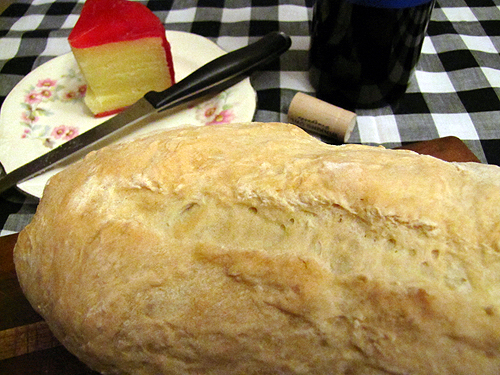 This recipe is based on my French Bread recipe, which yields a crusty finish even without the special tweaks I’m adding here to make it even crustier. Note that here, I’m making it with a sponge, and rapid-rise yeast should not be used. The French Bread recipe as posted (at the link above) is for the quick and easy version.

Printer-Friendly
How to make a Crusty Artisan Baguette:

*You can use any flour, or combination of flours, you wish, but if you’re using whole grains, be sure to add dough enhancer. (Find my homemade dough enhancer here.) Gluten contributes to a crispy crust. Other factors that aid in creating a crispy crust include high heat and steam.

I’m starting this bread with a sponge, which is not necessary for a crispy crust, but I’m just going all “artisan” on you here. A sponge is sort of an abbreviated sourdough. It adds a bit of that flavor, but not quite so strong, and it only takes a few hours rather than days or weeks to develop. You can adapt any yeast bread recipe to the sponge method. Usually, I’m too impatient for that, but here goes. To make a sponge, place the cup of warm water in a large bowl. Add the yeast. Let sit about 5 minutes then mix in one cup of the flour and 1/2 teaspoon of the salt. (You aren’t imagining things–this recipe includes no sugar. Contrary to popular belief, you don’t have to use sugar to make a yeast bread.)

Let the sponge sit and spongify. (I made that word up. I think.) You can let it sit anywhere from two hours to overnight. Since I’m impatient, two hours is usually all I can stand unless I’ve really planned ahead and it’s not almost dinnertime. The longer you let it sit, the more flavor you’ll get out of it. Find a warm place. Near the wood stove is good if it’s winter. (NOT ON TOP OF IT. That’s TOO hot and you’ll kill it.)

Sponge after sitting for a couple of hours: 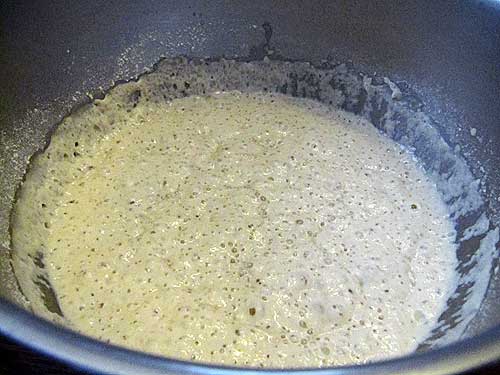 When you’re ready to go on with the bread, stir in the remaining salt and gradually add flour until the dough is stiff enough to knead. Knead dough until smooth and elastic–-a few minutes. Place dough in a greased bowl; cover. Let rise until doubled.

Shape the dough into a long, thin baguette and place on a baking stone. (Dust baking stone with cornmeal first if desired. No need to grease it.) Let rise 30-40 minutes. Preheat the oven to 450-degrees and heat a small pot of water. If desired, slash the top of the loaf with a sharp, greased knife. 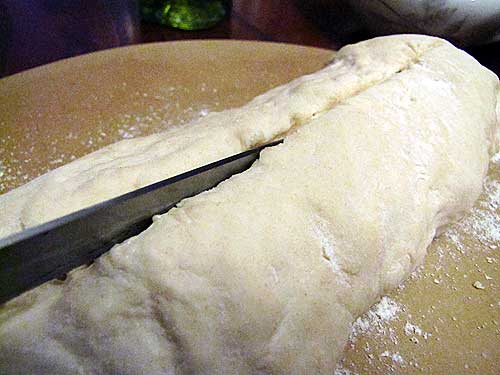 Brush the top of the loaf with water (NOT egg white and water, just water). 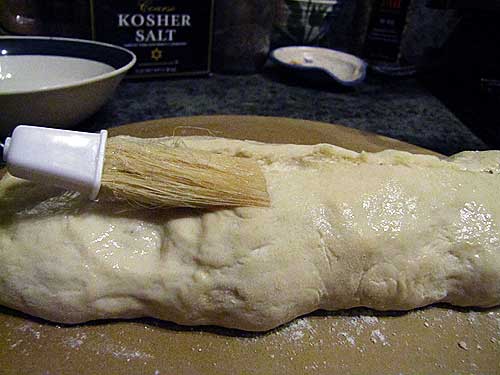 Place bread in the oven along with the pot of hot water for 10 minutes at 450.

Turn the oven down to 375-degrees and remove the pot of water. Continue baking for another 20-25 minutes or until done. Let cool 15 minutes on a wire rack before slicing it with a bread knife. This crust is so deliciously crisp, it will make a crunchy sound when you cut into it. Inside that crisp crust, it’s tender-chewy with a light sourdough flavor. 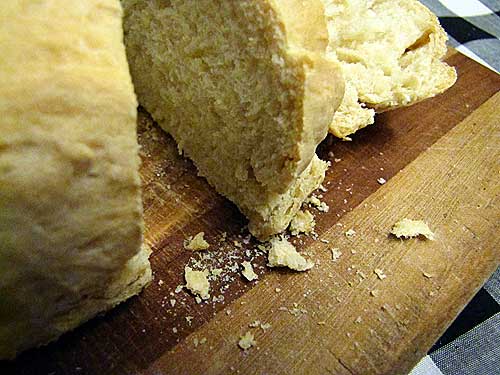 Call Pa and tell him to put on his Sunday overalls. He’s having artisan bread for supper!

P.S. For storage (what? you have leftovers?) do not seal it up air-tight. It’s best stored in a paper bag, like a brown lunch sack, to preserve the crustiness. 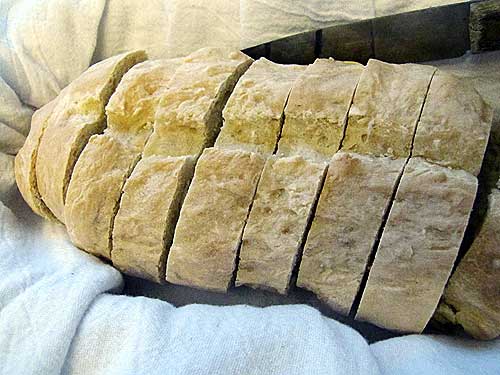