Schools were closed in our county this entire past week, and with all this snow, I didn’t get behind the wheel of my car once. One day, Morgan asked for cupcakes, so I whipped up a batch using my homemade yellow cake mix. I’m so prepared to be snowed in! Ask me for anything! I can do it!

Then she asked for frosting on her cupcakes.

Turns out, this year’s aluminum foil crisis was powdered sugar. I had used the last of my powdered sugar when I baked the cake on the outdoor grill during the power outage. I hadn’t even been to the store–we’ve had snow on the ground ever since, and more on a near daily basis. Most frosting recipes require powdered sugar.

I scoured cookbooks for an alternative that didn’t require powdered sugar. There’s seven-minute frosting, but I wasn’t in the mood for all that beating. There’s the fluffy white frosting I like to use on my chocolate cake sometimes. It also requires a lot of beating and the end product is best refrigerated, which I didn’t want to do with cupcakes. And I found a couple of coconut frostings that don’t require powdered sugar–but Morgan doesn’t like coconut.

So I decided to make fudge frosting. I’ve never made fudge frosting before, but it sounded so good and so chocolate, I knew Morgan would like it. I thought I was doing all right till I got to the last bit of it where it said to beat the mixture vigorously with a spoon for five to six minutes. (A lot of beating with this one, too, but the chocolate swayed me here.)

I beat it vigorously with a spoon for two minutes and realized I was in trouble. I couldn’t have beaten it for six minutes unless I’d started using a jackhammer. The frosting got stiff way too quickly. 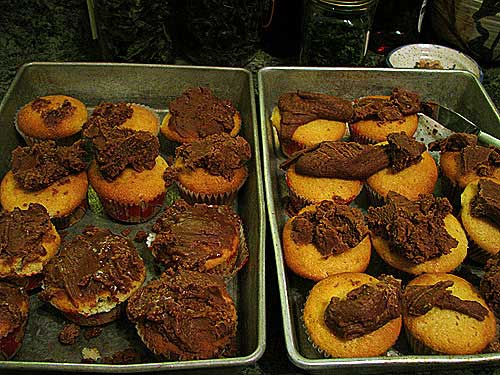 Morgan called it a delicious disaster.

It was sorta like lumps of fudge candy on top of cupcakes.

Okay, first of all I shouldn’t have tried to use fudge frosting on cupcakes. This is a frosting that should be poured over a 13 x 9 cake in a pan. The recipes even says so. I was just being difficult.

Still, it was delicious! So I decided to try again.

Morgan wanted to dive into the brownies right away. 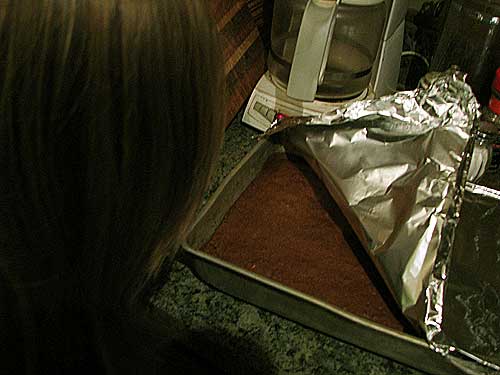 I said, No, my dear one, I’m going to make fudge frosting again! 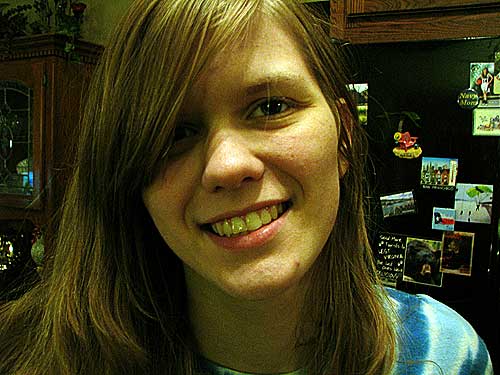 Teenagers can be so cruel.

Me: “I will not be defeated by this frosting!”

I set to work.

Printer-Friendly
How to make Fudge Frosting:

Butter sides of a heavy saucepan. Place sugar, corn syrup, chocolate, and salt in the pot; stir in milk. Cook and stir over medium heat until the sugar dissolves and the chocolate melts. 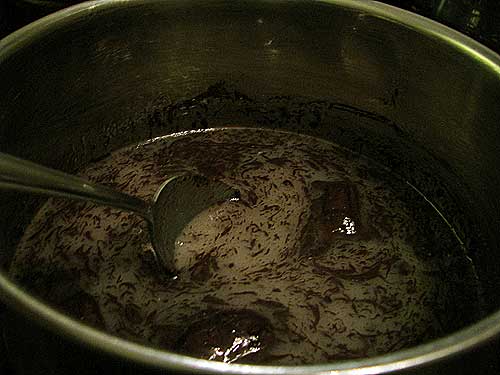 Clip a candy thermometer to the side of the pot and continue cooking, stirring occasionally to prevent sticking, until the mixture reaches 234-degrees (soft-ball stage). It should boil gently over the entire surface. 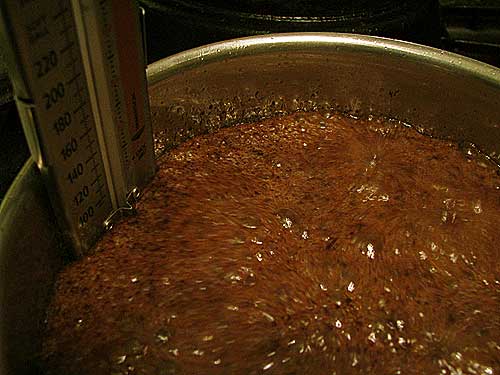 When the mixture reaches the right temperature, remove the pot from the heat and add the butter. Just drop it in, no stirring. (I cut the butter into pieces before dropping it in.) 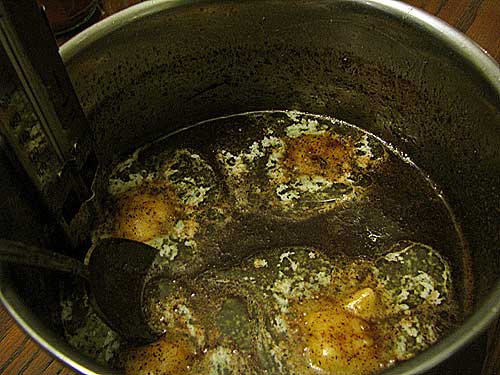 Let the mixture cool, without stirring, until it reaches 110-degrees. Add the vanilla. 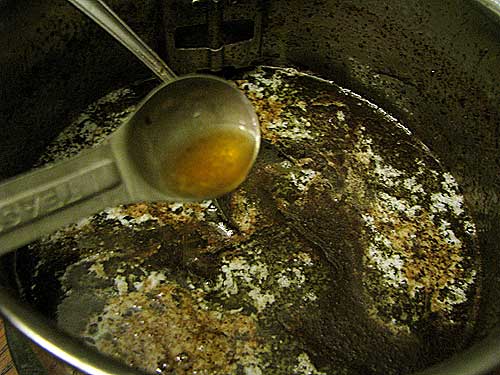 Get the pan of brownies handy, on alert. The rest of this process goes fast. 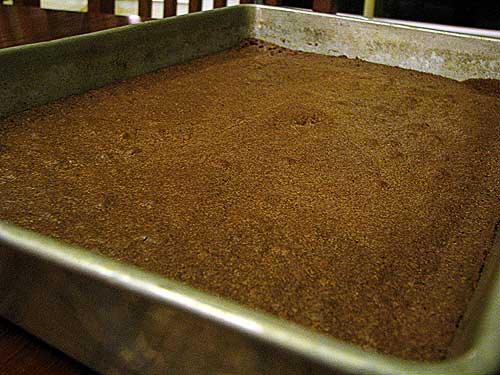 Using a spoon, beat the mixture vigorously for five to six minutes. THIS PART IS A LIE. The first time I made this frosting, when I put it on the cupcakes, I beat it for two minutes and it was so hard, I couldn’t even pour it. This time, I decided to go for a minute and a half. Seriously, this stuff can go from this deliciously syrupy chocolate mixture…. 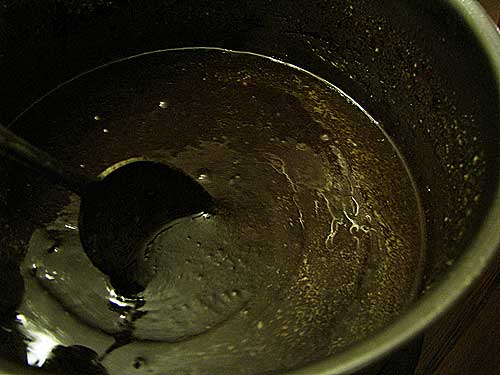 ….to hard as a rock so quickly, you wouldn’t believe it, so be careful. I’m not sure I went the whole minute and a half. I got scared and started pouring. 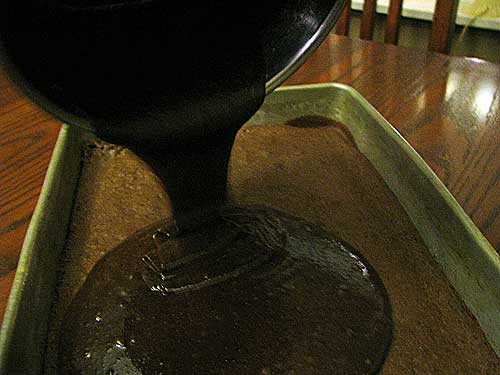 No sooner did I pour it out than it set up. I managed to spread it out over the entire pan of brownies, just barely, and I dipped a big spoon in hot water to smooth out a few spots that set up too quickly. I got a thumbs-up from the doubter when she (immediately) helped herself to a fudge-frosted brownie. 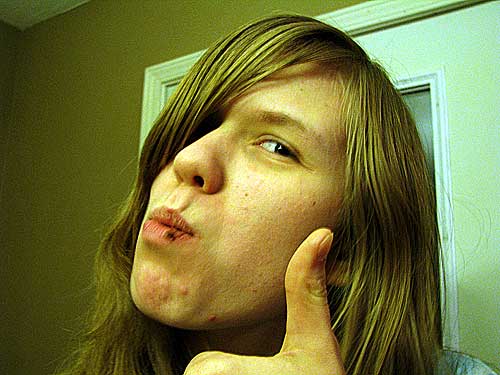 So while my second attempt was no repeat of disaster, I’m still far from mastering this frosting. What’s up with the five to six minutes? Next time I try this, I’m going to plan to beat it for no more than one minute, maybe 45 seconds! I will definitely make this again–it IS delicious! (A delicious challenge.) 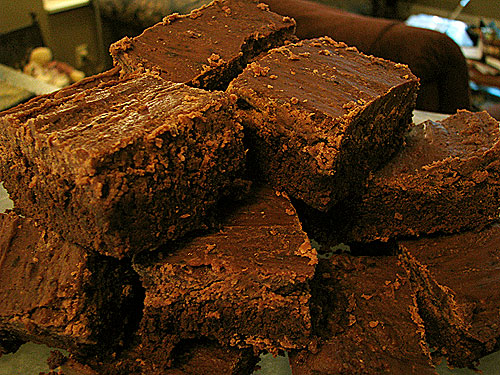 Any of you excellent cooks out there (and I know many of you are!) have experience with this frosting? Am I going wrong somewhere? Got any tips? I do believe my candy thermometer is correct. You can do a manual test on soft-ball stage by dropping a small bit of the mixture in cold water. If you can shape it into a ball but still flatten it when you remove it from the water, it’s soft-ball stage. I’m sure I followed all the other instructions properly, yet the beating time doesn’t work out. If you’ve made this frosting, do you beat it for five to six minutes and does that work for you (and do you use a jackhammer after two minutes)? Looking for fudge frosting help here!