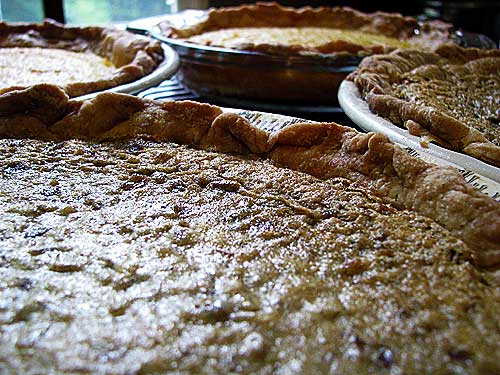 Yesterday, I rose before the chickens to take Morgan to school for a pre-dawn bus departure on a rewards trip to a theme park then came home, milked the cow, tended the other animals, ran chickens off the porch, wrote my newspaper column, worked on my website, and baked four pies. Today is my cousin’s annual ham and bean country supper held at the old farmhouse. When I lived there, it was a gigantic task each year to get my stuff out of the way as the party takes over the whole place. I still take part in the tradition, even though I don’t live there anymore. This year, I was tasked with making Georgia’s pies. Pinto Bean Pie and Cornmeal Pie have long been a staple of the country supper scene. (Next thing you know they’ll be showing up at trendy gourmet restaurants along with ramps.)

I made four, count ’em, four pies. Two of each. 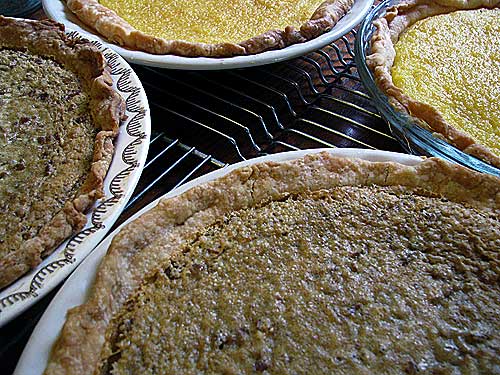 If you want a sense of accomplishment, bake four pies.

Pinto Bean Pie, obviously, centers around an unusual dessert ingredient–pinto beans. One cup of mashed pinto beans goes into each pie. The beans are cooked without seasoning.

I drained and mashed. The beans seemed a little dry. The recipe didn’t indicate whether or not you were to add water when mashing. That’s the trouble with some of these recipes from older ladies. They think you already know what you’re doing. 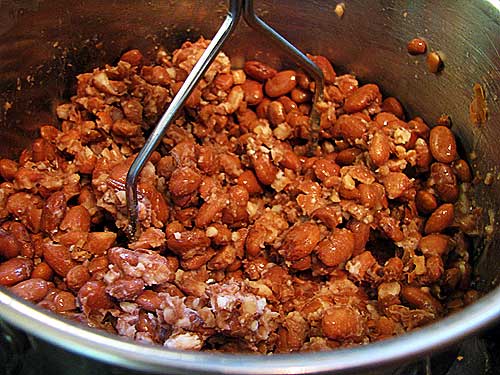 I called the pie hotline (Georgia).

My cousin’s wife, Sheryl, posted the recipe on Farm Bell, but she’s never baked it herself. Georgia’s been making these pies year after year after year, spreading their simple goodness and glory all over the county.

I asked Georgia if I was supposed to add water to the beans while I was mashing them. She said, “I don’t remember.”

I asked her who she got the recipe from originally, and she said, “I don’t remember.”

I asked her who the president was. She said Obama. (JUST CHECKING.)

We’re just glad now that she wrote the recipe down.

Robbed of further assistance, I made the command decision to add a little bit of water, just enough to make the beans mash up easier. 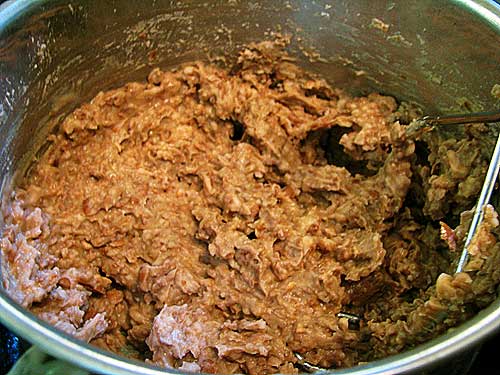 The instructions said to add this or that alternately, but having already veered off into the la-la land of making up my own directions, I dumped it all in together and mixed it up with the electric mixer. I didn’t even beat the eggs separately first. 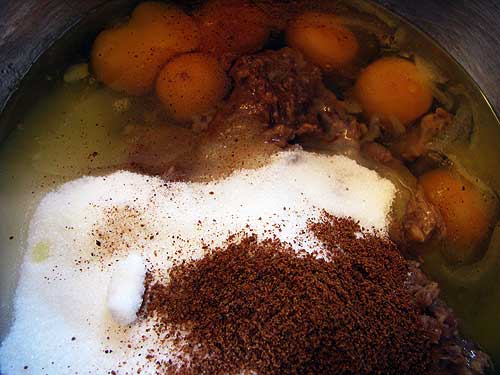 Baking four pies is a big job, and a little stressful in the midst of a busy day (I went to my cousin’s son’s high school graduation in the evening, too), but there’s also something relaxing about it that’s similar to punching the dough in making bread. With pie, it’s the rhythm of the rolling. 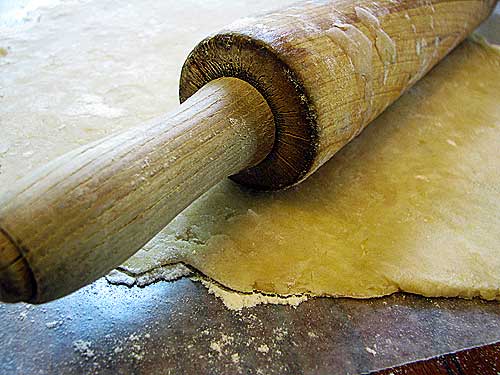 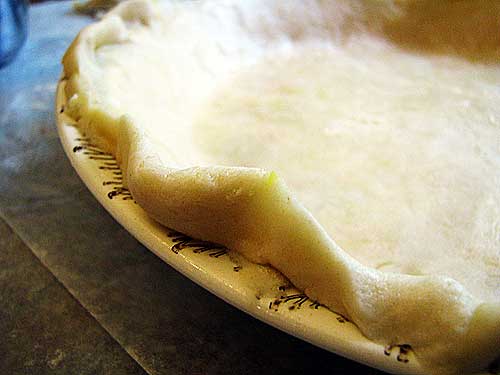 The pinto bean filling turns out looking like a cross between a pumpkin pie and a pecan pie as the small bits of bean that weren’t completely mashed resemble nuts. If you use a food processor, you could get the beans blended completely smooth. I like the look of the bean bits. 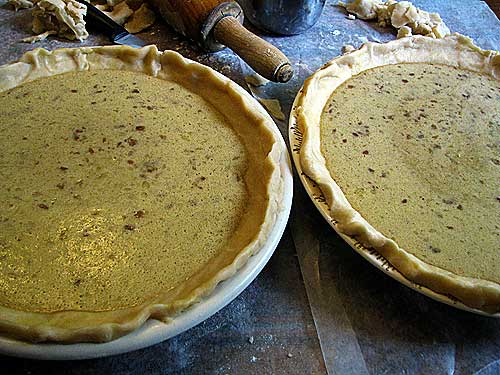 Despite its primary ingredient, it’s a sweet, delicious pie that doesn’t taste a bit like beans.

I bake pies on the bottom rack, whether the instructions say so or not. It guarantees a well-baked crust without over-browning the top. There’s nothing worse than soggy crust. 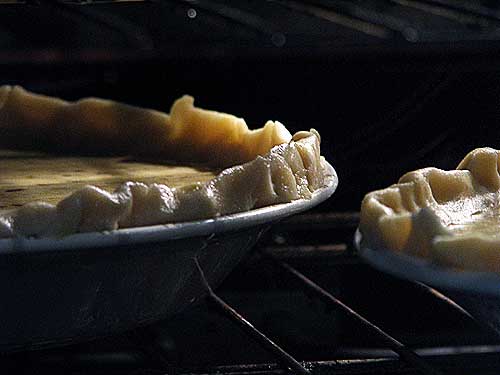 Cornmeal Pie is another oddball dessert. Like Pinto Bean Pie, it’s a custard-type pie, with the unusual ingredient in this case being 1/2 cup cornmeal. (Use fresh stone-ground cornmeal for the best flavor.) The filling is boiled before being poured into the pie shell to soften the cornmeal. 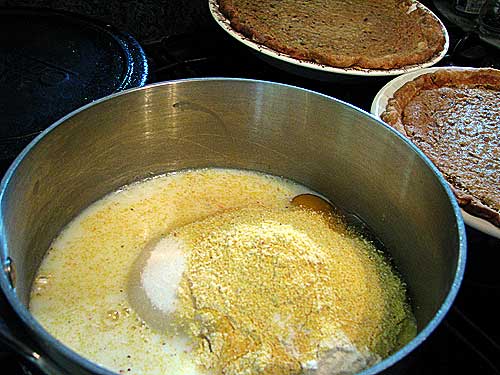 It has a nutty taste, even without adding nuts, but you can mix in some pecans if you want. I didn’t use nuts, but if I did, I think I would use 1/2 cup per pie. 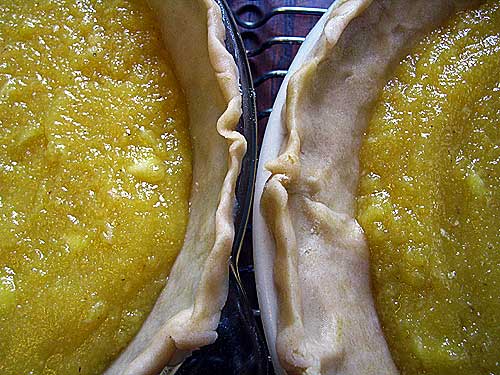 Remember when baking custard pies, the filling continues to set as the pie cools, so don’t over-bake.

By the way, 52 managed to come up with one of my heart’s desires, an old blue half gallon jar. 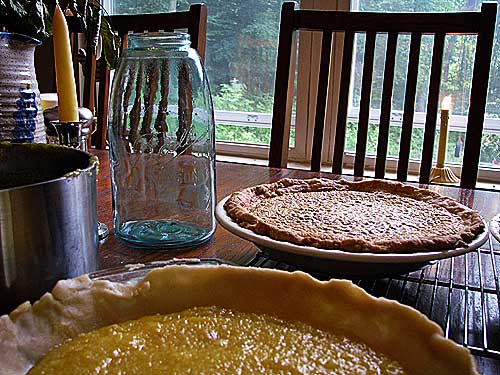 And he didn’t even have to steal it from Georgia. If he had, he’d be dead cuz she’d have whopped him one. 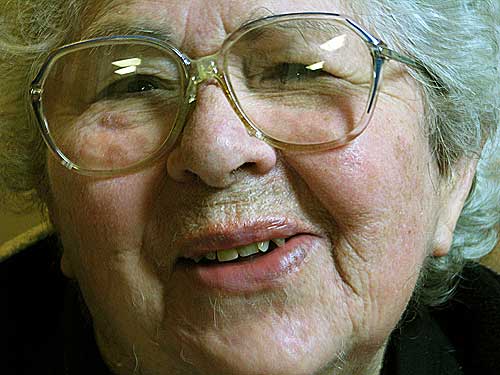 Pinto Bean Pie and Cornmeal Pie are both hardcore, old-fashioned, Southern-style treats created out of necessity by women with low budgets and basic ingredients who knew how to make anything taste like it fell out of Heaven. They’re the best of what a pie should be–simple, comforting, delicious. 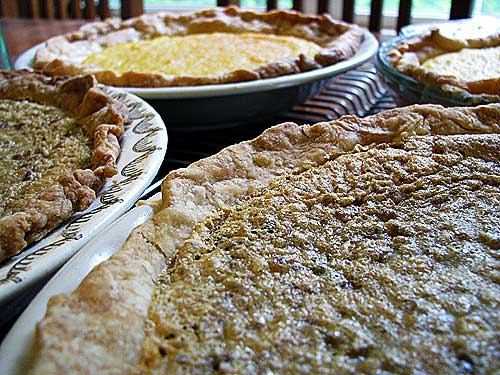