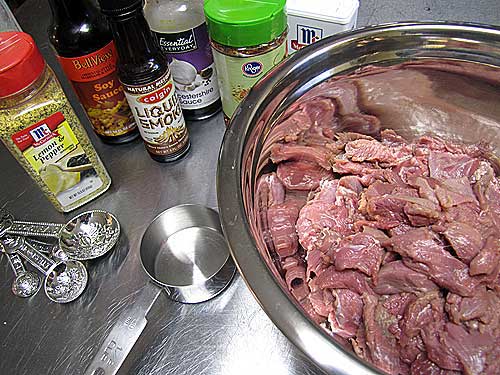 I had jerky in the dehydrator pretty quick last week because that is one of Ross’s favorite things–and he wanted some of his own deer jerky. He wanted it hot, and I tried a couple different small batches before coming up with his favorite recipe. I looked at about half a dozen recipes before developing my own, based on what Ross liked and what sounded good. You can try this one, or use it as a base for developing your own like I did! Jerky is a simple concept and should be geared to your own tastes.

This one has an underlying delicious sweetness topped off by heat. As in, HEAT! If you like it more mild, leave out or reduce the crushed red peppers. I developed this recipe for deer jerky, but it will work just as well for beef or pork.

By the way, I’d have a photo of finished jerky, but it never seems to last long enough for me to remember to take one. I’ve got another batch going in the dehydrator this morning. When I fixed the marinade yesterday, I put the jerky pieces in it then also added some butterflied backstrap I was planning to put under the broiler for dinner. This is also a great, flavorful general purpose marinade for meat. I broiled the backstrap after marinading it with the jerky for a couple of hours then cut it up to add to a meat lover’s fantasy pizza for Ross last night–venison, ham, sausage, pepperoni, and onion: 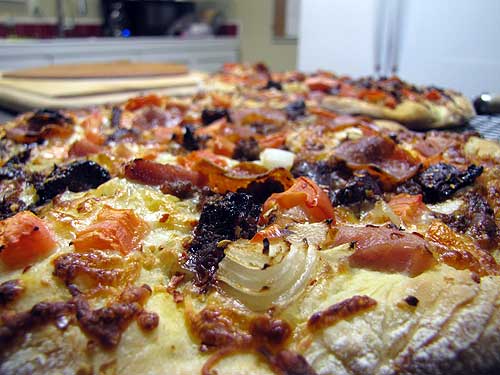 That was some good eatin’!

Get the handy printable at Farm Bell Recipes and save it to your recipe box:
Sweet Fire Jerky