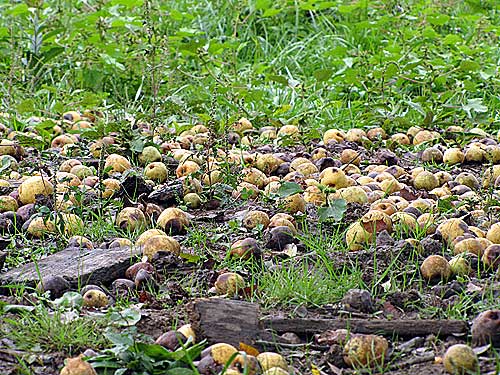 After I picked five buckets of pears early last week, I put them all through my Squeezo and had a pear canning fiesta. Which was a good thing since so far this week, I haven’t done anything much besides keep the couch company. (I can’t remember the last time I was so sick.) I did learn to make the basket weave crochet pattern stitch and started working on a winter scarf from Minnie Belle’s yarn, when I feel like sitting up, so there’s that. Morgan likes it and wants me to make her one using Crazy’s yarn. Then I think I shall make us matching hats. Maybe by then I will have a miraculous recovery and not die, after all.

Meanwhile, I’ve been meaning to post my passel of pear recipes, so here they are. All of these recipes are easy ones, starting with pear sauce, even the jams. Pear sauce is handy–good for adding to baked goods to make moist breads, muffins, cookies, etc, so be sure to keep some plain pear sauce, canned or frozen, when you’re processing! You can even use pear sauces to make fillings–after you open a jar, add ClearJel or cornstarch for thickening and you have pie. Any pear butter can also be canned as pear sauce, sans the simmering down, and any sauce recipe can likewise be a butter. I like to can some both ways to leave my options open. While the butters are great on biscuits or toasts and can also be added to cakes and so on, the sauces are more versatile–they can be thickened to fillings or used as is for topping over pancakes, french toast, pound cake, cheesecake, or even used as sauces for meats. Five buckets of pears (about 125 pounds) sounds like a lot, but they can be used in so many ways!

I’ll be selling (hopefully) a lot of my pear bounty, too, so may not end up with that much. I might have to go back to the pear tree!

This first jam I created was inspired by CindyP’s Vanilla Pear Pineapple Jam. Pineapple (or apple, or just about any other fruit) can be used to “stretch” if you don’t have enough pear sauce. (I had, uh, PLENTY.) I also upped the vanilla content, and wow, this is a vanilla lover’s jam. The mild pear sauce really lets the vanilla take over. I think this jam tastes like vanilla ice cream.

Another simple jam, this one relies on brown sugar for a caramel flavor:
Caramel Pear Jam

Here is my pecan pear butter, which can also be canned as pecan pear sauce, depending on what you want to use it for and how much time you want to spend simmering. The best idea is to can some both ways for the best of both worlds!
Pecan Pear Butter

I like this one best as a sauce, but it can be simmered down to a butter, too.
Coconut-Raisin Pear Sauce

Now I’m out of jars and I had to freeze some quart baggies of plain pear sauce, but I’m mostly opposed to freezer preservation since The Great Derecho of 2012, despite my new generator, so will jar it up as soon as I have a chance to pick up more pint jars.

If you will be at the Black Walnut Festival in Spencer this weekend, look for me on SATURDAY ONLY near the Heritage Building, where you’ll see a big man grinding corn on site. I’ll be there with my cousin, who will be selling his cornmeal–pick up a bag of fresh ground cornmeal and take a pint of something with you. I’m totally sure you need some Whiskey-Raisin Apple Butter or Double Vanilla Pear Jam (or anything else I made) to go with the best cornbread you’ll ever make from my cousin’s fresh ground meal. And if I can’t figure out what else to do with Gwennie, who escapes from everywhere (except the house, where I can’t leave her alone for 12-14 hours on Saturday), she may come to work with me! I hope she can count change!

P.S. This is all assuming I’m still alive on Saturday.