When I was growing up, we used to have a pot of pinto beans and cornbread on a regular basis. That was dinner–the whole dinner. Pinto beans and cornbread. And it’s one of the best dinners in the world. However, I’ve since discovered that some people find this meal plan bizarre not to mention completely unappealing. 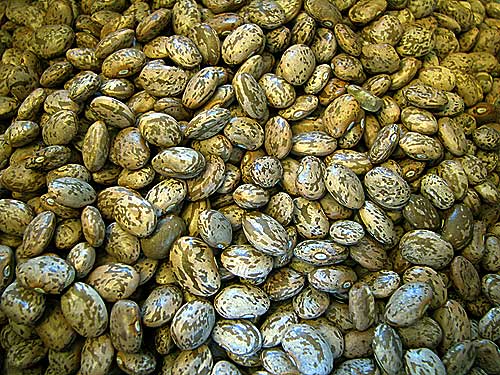 Dry beans, purchased in bulk–I never buy smaller than a 10-pound bag–are cheap, cheap, cheap! And think of all the meals you can get out of one big pot of beans. My usual routine goes like this: First night, beans and cornbread. Second night, the beans go into a pot of chili. After that, refried beans for burritos. Sometimes the beans end up in stews, too.

To start a pot, rinse and sort the beans (unless using beans that don’t require pre-soaking). You can use a colander, or you can just use the pot you’re going to cook the beans in. I’m pretty lazy, so I usually don’t get out the colander. Either measure out the beans if you want or just pour the beans into the pot straight out of the bag.

I buy beans in huge bags, so I usually scoop them out with a one-cup measure. I scooped out five cups for this pot. That’ll get me my first night of beans and cornbread plus some chili and refried beans later on. 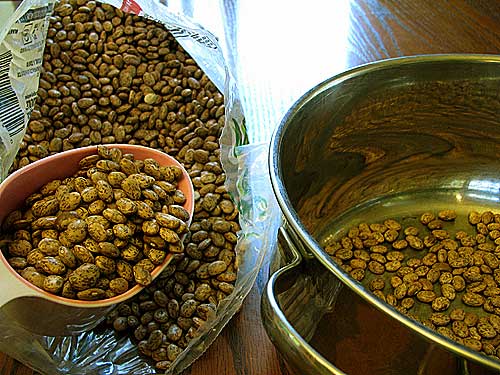 I’m from the suburbs and we’re phobic about dirt there. We’ve got our dirt all under control in the suburbs. Dry beans can be dirty. Every bag of beans is different. I’ve found actual clods of dirt in a bag of beans before. I’ve even found tiny rocks in the beans. So I’m really paranoid. After I put the beans in the pot, I put the pot in the sink and run cold water into it. 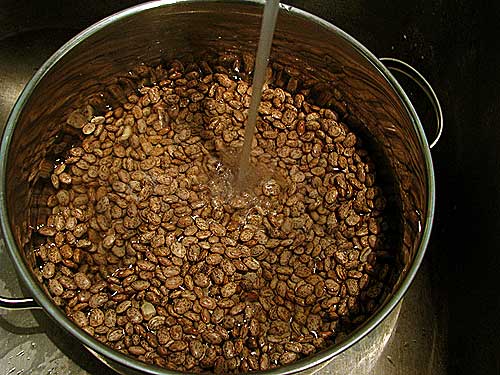 As I’m running the water, I swirl the beans around with my hands, loosening dirt and looking for tiny rocks. (Most of the time I don’t find rocks, by the way. That’s rare. I just don’t want to miss one. I’m paranoid….) Then I put the lid on the pot enough to hold the beans in and I drain the water out.

Long soak: Rinse and sort beans. Place beans in a large pot and cover with water. Cover with a lid. Let sit at room temperature overnight (or at least six hours).

Quick soak: Rinse and sort beans. Place beans in a large pot and cover with water. Cover with a lid and bring to a boil. Turn off the heat. Leave covered and let sit one hour.

I use the quick soak method almost all the time, though the long soak method is considered to be ideal. (It’s supposed to make the beans easier to digest, so if you have trouble with beans, you might want to plan on the long soak.)

After one hour, you can either continue and cook the beans with the bean water currently in the pot, or drain the water out and replace with fresh. (What do you think I do? Have I mentioned that I’m paranoid? You know if there was one speck of dirt left, the soaking process loosened it up and now I can drain it out! Yes, I know, I’m also draining out some delicious, nutritious bean water. And possibly some dirt! I can’t help it. You do what you want.) Either way, make sure there is enough water to cover your beans by a couple of inches. The beans will have plumped up in soaking, so even if you prefer to leave the bean water as is without draining, you will probably still need to add water.

To cook, bring the beans to a boil again then turn down to a simmer. Keep covered while cooking. 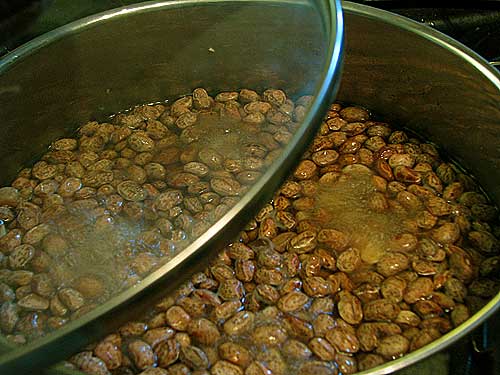 But first–now’s the time for the good stuff! If I have a ham bone handy, it goes in the pot. Whatever meat is left on the bone will come off in tender pieces. (Remove the bone after the meat falls off, at the end of the bean cooking time. I let it cool then give it to Coco. She loves that!) If I don’t have a ham bone handy, six slices of peppered bacon go in there. If I really have absolutely nothing, then at least some reserved bacon grease goes in. But, seriously, that’s pretty desperate. You just don’t want to cook a pot of beans without some ham or bacon. You can cut the bacon slices up before you put them in, but that’s not necessary as the bacon will pretty much fall to pieces during cooking. (And yes, you put the bacon in uncooked. It will cook in the pot with the beans.)

I didn’t have a ham bone handy yesterday.

If you’re a vegetarian, you can skip this whole step and please forgive me for all this ham and bacon talk.

Most country-style bean cooks will put in a ham bone or some bacon, but after that, it gets really individual, and I’d love to hear about how all of you who cook beans season yours. What I put in my beans varies at times, but usually I’ll put in garlic powder and chili powder for sure. Often I also put in some ground red pepper and sometimes red pepper flakes. I also usually put in a roughly-chopped onion (unless I’m out of onions or unless Morgan’s watching because she hates onions) and sometimes also some chopped fresh (or in the winter, frozen) peppers, sometimes hot, sometimes mild, depending on what I have available to me.

I like my beans to be spicy, so I go pretty heavy on the seasonings. How much you need depends on how big a pot of beans you’re making, but for the size pot I made here (starting with 5 cups dry beans), I started out with a couple teaspoons each of garlic powder, chili powder, and ground red pepper (plus a chopped onion and some sliced hot peppers).

If I have some hot peppers to put in, then I skip the red pepper flakes. I was the lucky recipient this week of two big bags of peppers, the last picking from my cousin’s and Georgia’s garden. 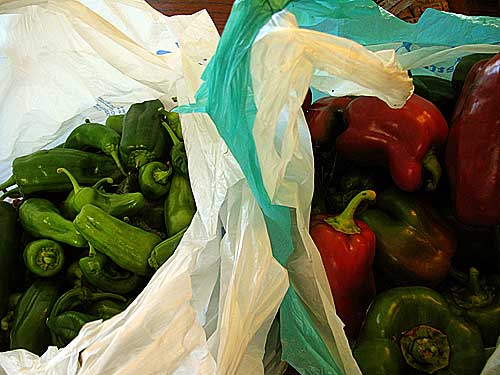 I sliced up three large hot peppers and put them in the pot, seeds and all. 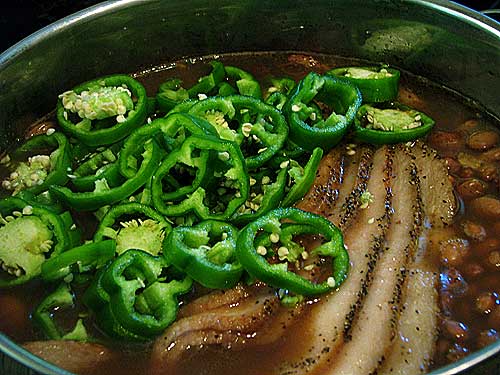 If this is your first time to make a pot of beans, season it up lightly to begin with. Later in the cooking process, when the beans get soft enough to taste, you can test it and add more seasonings if needed. As you cook beans over time, you’ll get a better idea of how much and what type of seasonings suit you. Experiment!

Don’t add salt until the last 30 minutes of cooking. Adding salt directly too early will make your beans tough and they’ll never soften up right no matter how long you cook them. Plus, if you’ve got a ham bone or bacon in the pot, there’s a lot of salt hiding right there. It takes time as the beans simmer for the salt from the meat to permeate the beans. You don’t know how salty your pot of beans already is until you give it time. When the beans are soft and close to ready for serving, test the beans and add salt, and other additional seasonings, until you’re satisfied.

A big pot of beans takes anywhere from four to six hours (or more) of simmer time. Test your beans periodically as your time will vary, from pot to pot, depending on various minor factors. If you find your water getting low in the pot, just add more. (I add it hot.) You always want the beans covered with water while cooking.

When I was a kid, I always put ketchup on beans. A travesty, I know. I was a child, what can I say. However, I will confess that occasionally, even now, for old times’ sake, I put ketchup on my beans. I usually regret it because it completely spoils all the flavor, but it’s an occasional irresistibly nostalgic temptation. Every once in a while, I’ll put sour cream and shredded cheese on top of a bowl of beans, too. This is really yummy! Most of the time, I eat them straight as they come out of the pot because they are so good just like that.

You can also cook beans in a crock pot on low. They still need to be soaked first. If you cook beans in a pressure cooker, you can get a pot ready in about 30 minutes! But, I’ve never used my pressure cooker for beans and unless I run into a Bean Emergency (!), I never will. I don’t use my crock pot either, though that’s handy if you’re going off to work all day. In that case, I’d suggest cooking your beans on the weekend. You’ll enjoy it more. There’s just nothing like beans simmering in a big pot on the stove all day. 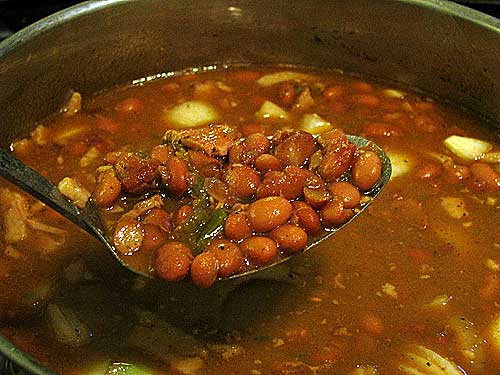 That, and a pan of hot, fresh cornbread coming out of the oven. 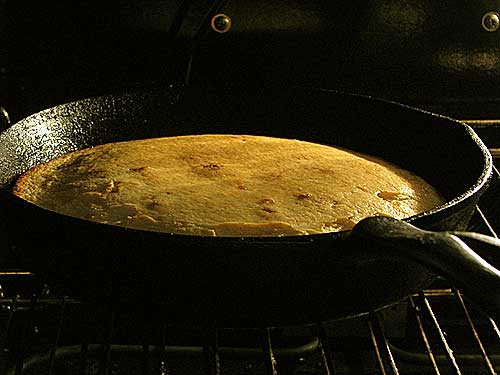