Tom and Diane attended a preserving and breadbaking workshop at Sassafras Farm the weekend of September 10-11. Tom, known as “Old Geezer” in the comments section, wrote this beautiful piece about their trip for me to share. Tom is the one who brought me the fun neon “Open” sign for the studio and also, upon surveying the pitiful state of my knife collection, later sent me a couple of fantastic knives. (A good knife! I never knew ye!) They’re a lovely couple, and I think you’ll enjoy reading his report and visiting Sassafras Farm vicariously through his eyes.

From the desk of Old Geezer:

It was a weekend fraught with high anticipation and no small amount of anxiety. Would our homemade RV trailer make it all the way to West Virginia from Connecticut?

Would Suzanne be as warm and hospitable as her blog hinted? Would we actually enjoy canning? Would Coco be friendly? What are goats REALLY like? And what about CHICKENS?

I first encountered CITR when Googling for cat pictures several years ago. I have two cats upon which I dote. I like cats. I like cat pictures. But when I first came surfing to CITR that day, I not only read the cat blogs, but also all of the other animal blogs as well, right then and there. I was hooked. Since then I have checked on the various segments of CITR several times a day, every day. Suzanne’s struggle became my struggle (although I have, Lord knows, no desire to farm, even though I do watch RFDTV!). 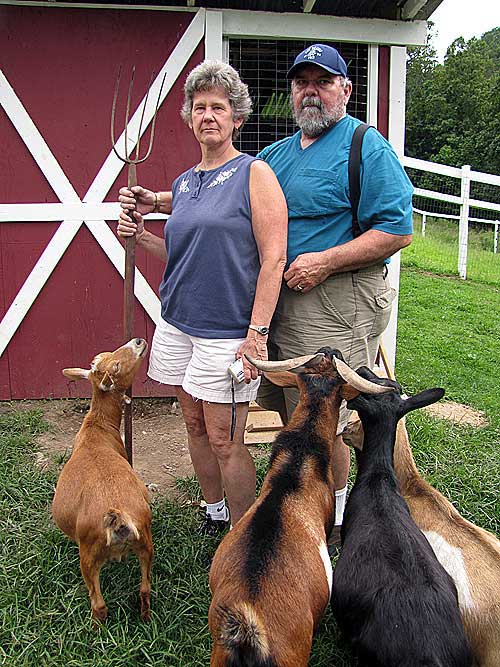 My wife, Diane, reads actual books, not internet blogs. But I knew she would enjoy hearing of Suzanne’s exploits, so I began filling my wife in regularly on all the CITR goings on. When the Kickstarter project came up, she had no problem endorsing our contribution and then looking forward to the resulting trip to West Virginia, pulling our homemade RV for its longest road adventure yet.

So there we were, having made the trip from Cedar Springs Campground down to Clio (pronounced, as you might expect, KLEYE-oh) and up the road to Sassafras Farm. Between Suzanne’s directions and our GPS, it was easy to find. Our official greeter was Casper, who greeted us like an old friend, although he had never seen us in his life. I think he knew we had treats in the car. 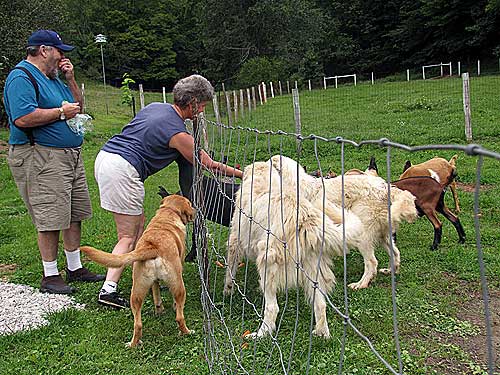 Soon after that, we met Suzanne and the canning expert, Dede. Within minutes we were at ease all around–until, when we went into the studio, I saw the mound of vegetables laid out in neat rows. Oh, no, I thought. She means it! We’ll actually be doing all the work! 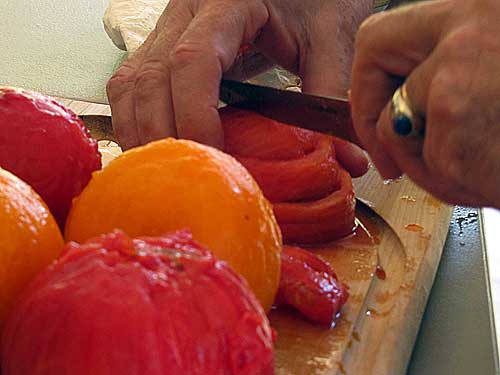 Yes, folks. This workshop is not one where the experts demonstrate while the visitors look on approvingly and eat snacks! You, the students, will do it all–from prep to can to cool to enjoy. So be ready. You will enjoy the effort as well as the result.

The farm dinner was hale and hearty, and we got an explanation of the syllabus as we ate. We also got to sample earlier examples (canned by Suzanne) of what we would be making the next day. Then we got a tour of the farm. As if on cue, BP and Glory Bee vigorously pooped at our arrival. The animals in the near pasture were accustomed to visitors and therefore assumed we would be bearing treats. 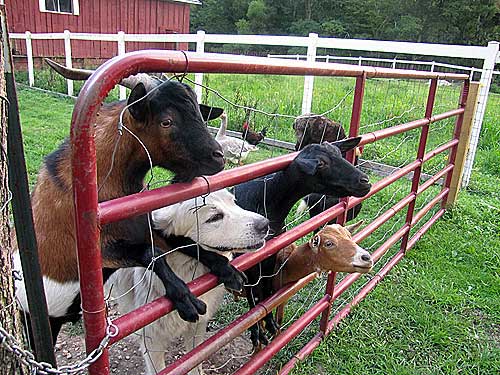 Well, not today. So, like Mr. and Mrs. Pied Piper, we led a parade of vainly hoping animals around the yard and into the barn. Obligingly, Chloe and The Hamburger Goat showed us their trick on the hay elevator (but the access to the hay loft had been blocked). We then got to fling the normal feed ration to the crowd. Their response was, “Is that all?”

The next day started early. We had thought to bring a bunch of treats for the various animals. Our greeter, Casper, got a prime rib bone right away. We then took care of Coco and Chloe the same way, after which Coco told Chloe in no uncertain terms that both the bone treats were hers. (No fear, Chloe sneaked hers back shortly afterwards.) 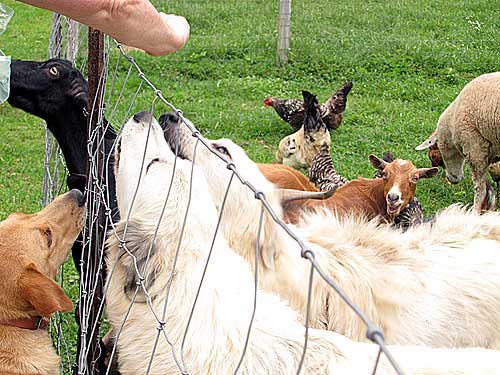 The two visitors then spent the day prepping (i.e slicing veggies and so on), measuring, watching, trying, boiling, lifting, measuring, kneading (for the bread lesson) and in general working their buns off learning the secrets of water-bath canning (for high acid foods) and grandma bread-making.

And, taking a break in the middle, we visited all the animals and fed them their vegetable treats. Of all of them, only Zip heeded her mother’s advice and refused to take a carrot from a strange fat man. 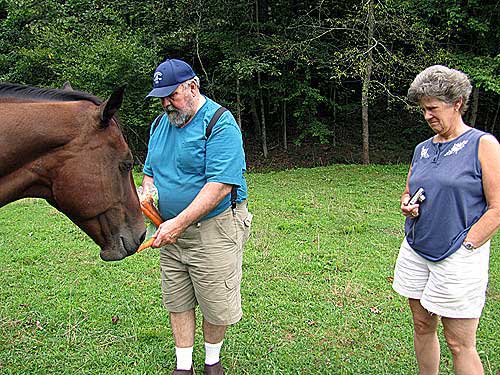 Jack and Poky had no such reservations. Is there a more soothing, farmy sound than a jack crunching on a carrot? 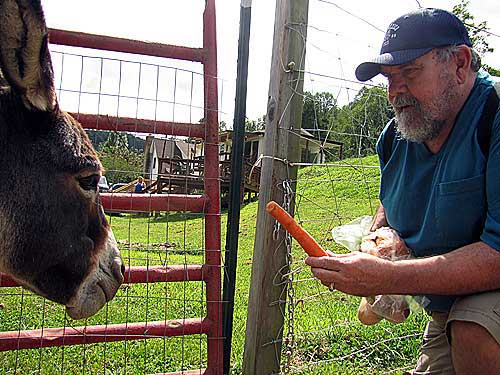 The goats, of course, had not only no reservations, but also no manners! 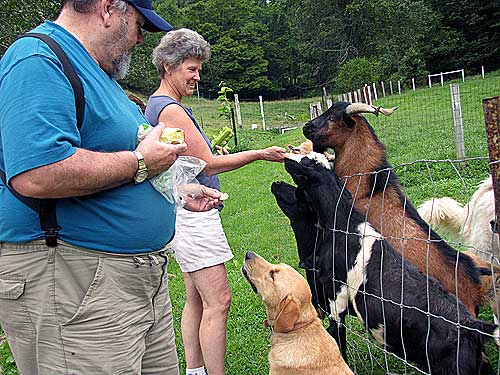 I will not bore you with the tire troubles on the way home. The workshop experience was sheer delight, and having had years of lead-in to The Trials and Tribulations of Suzanne (And this is the stove that was stolen from me…) made it all the more special.

I don’t know if we will ever actually can anything, but we will certainly know how when we want to. And making the grandma bread is a sure future thing for us. You and you and you need to take one of these workshops also. You really do. Sign up soon. And bring treats. 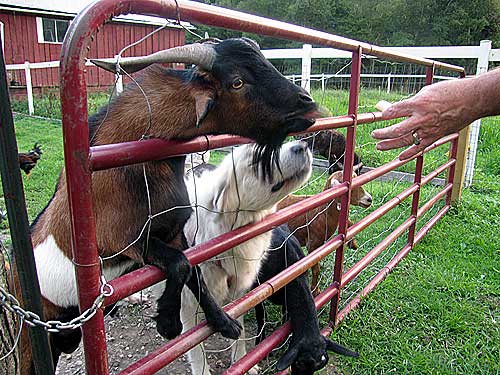 Back to Suzanne: Thank you, Tom!

*Find out more about workshops at Sassafras Farm here.