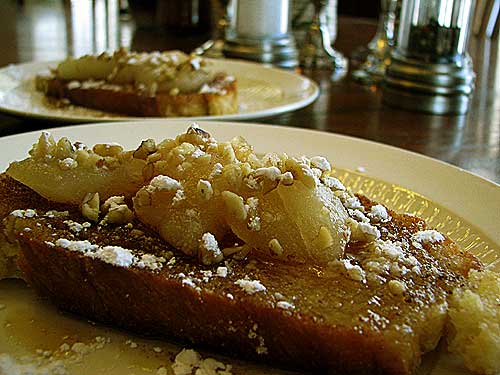 My refrigerator is full of home-rendered lard and dozens of eggs from my chickens. My freezers are full of farm-fresh meat. There is a pound of homemade cream cheese draining in my kitchen.

And because the universe has a sense of humor, Weston has acquired a vegan girlfriend. I picked her up yesterday over at the old farmhouse where her parents dropped her off–to spend the entire day. With me. And my cream cheese and eggs and lard.

I used to be a vegetarian. (Take a moment, pick your jaw back up off the floor.) In fact, I was a vegetarian for nearly 10 years. I became a vegetarian in college, where I inhaled books like Diet for a Small Planet. I wasn’t only a vegetarian, I was also an animal rights activist. I was a founding member and president of an animal rights student organization at Texas Tech University. We did things like bring activists and authors to campus to speak, sponsor debates with students from the agriculture department, and sign petitions to save the whales. One of the television stations in town held a first freeze contest every year (to guess the date it would occur) with the prize of a fur coat. We organized a protest march in front of the TV station offices and got ourselves in the newspaper and on all the other TV stations that day. The next year, they gave away a beach trip….

I continued to be a vegetarian throughout my kids’ early childhoods. When they were little, I got them one of those big boxes of plastic play food. The various pieces included the makings of a cheeseburger–buns, lettuce, cheese, and a hamburger patty. Because they didn’t know what a hamburger patty was, they used to call that piece a cookie.

Eventually, they went to school, and got old enough to even spend the night at friends’ houses, and they found out about meat. In particular, they found out about fried chicken. They started begging me to make this heavenly delight at home. One day, for no reason I can recall, I gave in and fried up some chicken for them. Next thing you know, I was fixing fried chicken for them on a regular basis. And one day, I just couldn’t bear it and ate a piece myself. And you know where that slippery slope led.

I’ve got home-rendered lard in my fridge.

Anyway! So it was with a combination of panic and nostalgia that I faced a day of vegan cooking. I’m actually quite comfortable with vegetarian cooking. However, I was never a vegan. Weston’s girlfriend not only doesn’t eat meat, she also doesn’t eat eggs or any dairy products. On top of that, I’m not stocked up on any handy helpers and substitutes that I used to keep around, like tofu, TVP, soy milk, miso, soy cheese, and so on. (I wonder if I can find some miso around here somewhere? I miss miso. Miso, if you don’t know, is a soybean paste, and can be used in all sorts of ways for flavoring, sauces, gravies, soup, etc, and is very nutritious. Haven’t even thought about miso in forever. It is quite high in sodium, but a little miso goes a long way.) TVP, by the way, stands for texturized vegetable protein, which is a mouthful and explains why everyone calls it TVP. It works as a replacement for ground beef in recipes–it’s rather tasteless on its own, but can be seasoned and adds protein to a dish.

The girlfriend actually showed up with her own soy patties to ward off starvation (Weston must have told her about the lard), but I didn’t let that stop me from completing my challenge.

I love eggs and cheese, and used to cook a lot of vegetarian dishes including eggs and cheese, but once I gave it a little thought, I remembered that many vegetarian recipes are also incidentally vegan. And that Grandmother Bread, in its basic form, is a vegan bread.

For breakfast, I served up slices of pan-fried Grandmother Bread that I had made as a French loaf the night before. I fried them in a bit of olive oil, sprinkling sugar, cinnamon, and nutmeg on top. I drizzled the slices with maple syrup then loaded on some warmed, sliced pears, chopped walnuts, and a dash of powdered sugar.

Lunch was bean burritos–homemade flour tortillas (using shortening) and vegetarian refried beans. (With shredded cheese for those who wanted it.)

For dinner, I made a spicy lentil sauce that I used to cook frequently back in my vegetarian days. It is delicious and I had nearly forgotten about it. This sauce is based on a recipe from Nikki & David Goldbeck’s American Whole Foods Cuisine, which is a fantastic vegetarian cookbook. (Note: A good many of the recipes in the book call for eggs and cheese, but there are also many vegan recipes. Another great vegetarian cookbook is Moosewood Cookbook.) Here is the way I make this sauce. (The recipe as it stands in the book is a little bit different. If you have the book and want to check out the original, the recipe is called Pasta with Lentil Sauce.)

Rinse and drain lentils. Add water and onions. Bring to a boil then simmer covered for about 20 minutes. Add tomatoes, tomato paste, and everything else to taste. (Start with smaller quantities of the seasonings than I have listed here. This is how I like it. Season it how you like it.) Simmer a few more minutes as you stir in the tomatoes and seasonings–and you’re done! 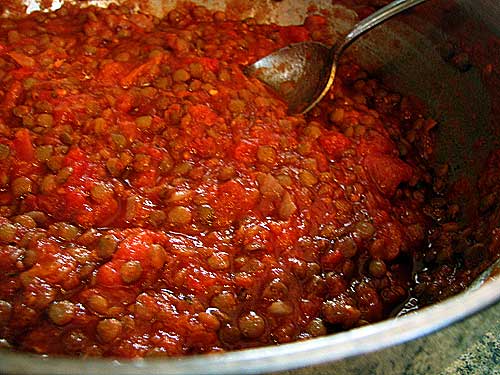 This is a very fast sauce. It has a texture and sense about it that feels almost meaty. (It’s a very thick, hearty sauce.) It’s great over pasta, as a sloppy joe substitute, or, as I used it this time, a filling for (cheese-free) calzones.

Find the Spicy Lentil Sauce recipe on Farm Bell Recipes and save it to your recipe box.

To make the calzones, I made slightly more than the one-loaf dough of Grandmother Bread, starting with 2 cups of water instead of 1 1/2. After the first rise, I divided the dough into 12 balls, rolled them out into circles, ladled on a big heaping spoonful of the spicy lentil sauce, folded the dough over, and crimped the edges. I baked them on greased baking sheets for about 30 minutes. After about 20 minutes, I took them out of the oven, brushed olive oil on the tops, then sprinkled the tops with garlic salt and dried minced onions, and finished baking. 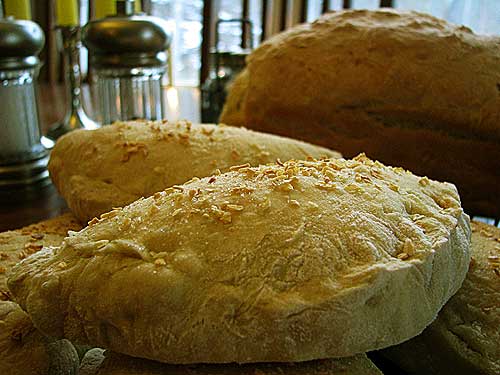 It was all quite tasty and pleased the teenagers. (There was some sauce left over. I’ll use it with pasta.) 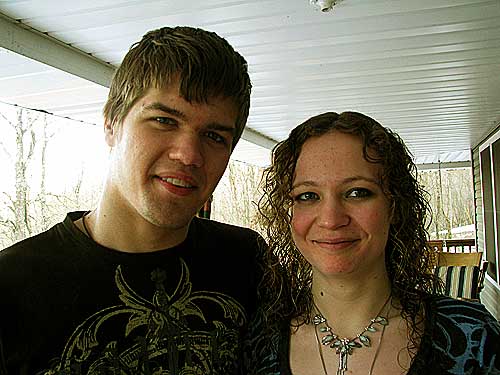 P.S. The girlfriend is cute as a bug in a rug. She’s a homegrown West Virginia farm girl (she lives on a 200-acre farm–the 200 acres part really had me drooling) and says the road to her house is worse than ours. She’s perfect!

P.P.S. Edit to add: David Goldbeck (THAT DAVID GOLDBECK) commented on this post. I can die now. Check out Healthy Highways for more info on the American Whole Foods Cuisine book and more.