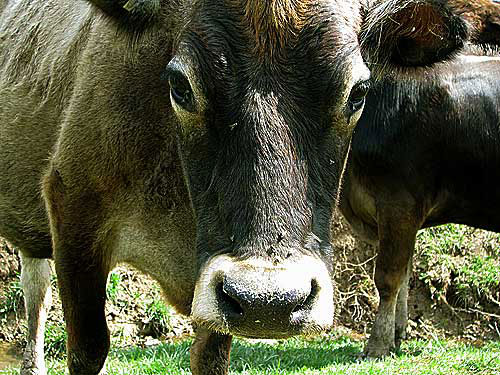 Oh, the plans I have for my pretty brown cow! I see cream cheese, cheddar, swiss, mozzarella, butter, whipped cream, and so much more!

Several people asked–what will I do with two gallons of milk a day? Two gallons a day is actually pretty perfect. This sweet “career girl” cow was giving four gallons a day, between two milkings. Her current owners worked her down to one milking a day at two gallons because that was just right and enough for their family. It sounds just right for me, too. For one thing, it cuts the work in half. I’ll milk her in the morning and take care of handling it then I’ll have the rest of the day off cow-duty. Other than the part where I’m putting bonnets on her head and draping her in dandelion necklaces.

Fourteen gallons of milk a week sounds like a lot–but it’s really not. We only need a couple of gallons a week for milking and baking, but there’s so much more to milk than milk. Your average hard cheese starts with two gallons of milk, yielding one to two pounds of cheese depending on the recipe. Cheeses like ricotta and mozzarella usually start with a gallon. It takes a lot of milk to make a little cheese. Two gallons of milk will yield one to two quarts of cream (depending on the time of year and other factors). Two quarts of cream will yield (depending on the method and type) a pound of cream cheese or a half-pound of butter. Then there’s whipped cream and sour cream. Think of all the various dairy products you use in a week. Don’t forget the yogurt and ice cream! And what if you didn’t have to buy any of it anymore!

Hard cheeses are aged for a long time–so you have to build up a supply to use at your leisure later on. You can also freeze milk. The cow won’t always be in milk! If they’re pregnant, they need to be dried off a few months before they deliver. (It’s like putting away eggs in the freezer for when your chickens aren’t laying.)

If you have far too much extra, the milk can even be used to feed other animals. (Nothing goes to waste on a farm!)

Most cheesemaking and other home dairy processes aren’t any more time-intensive than making a loaf of bread. Start the cheese, hang the cheese, press the cheese–these are all relatively quick tasks then the magic happens while you’re leaving it alone.

A typical week here, after a couple of gallons for drinking and baking, will probably mean a hard cheese or two, lots of butter for cooking and baking and bread, some sour cream and cream cheese, and ricotta and mozzarella if I’m making lasagna, mozzarella a couple more times for pizza (which I often make once a week), and oh, the ice cream! Some yogurt if I’m in the mood. We might hold some kind of wet t-shirt milk bath wrestling tournaments for the neighboring farm girls, too. (Just checking to see if you’re paying attention.) 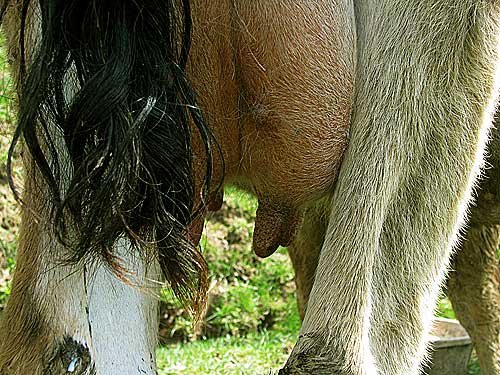 Fourteen gallons could go pretty quick. I can’t wait for my cow to get here!

As for her name–a number of people asked about that, too. She doesn’t have one, which I think is tragic, and of course she needs one! Suggest a name in the comments here and we’ll pick out a handful of our favorites then I’ll put up a poll and let you all vote to choose her name!