I have a new obsession. Baby cheese. Not cheese for babies! I mean smaller cheeses. One pound cheeses. Cute little baby cheeses.

Technically, baby cheese refers to cheeses made with a shorter aging time, meant to be eaten “young” and relatively mild. They’re often sold in smaller packages as well. Longer aging gives a sharper flavor to most cheeses. You can age a so-called baby cheese just as long as their larger counterparts, of course, when you’re making your own at home.

The advantages to “baby” cheesemaking are myriad! Making small, one pound cheeses means you only use a gallon of milk. You can use a smaller pot. 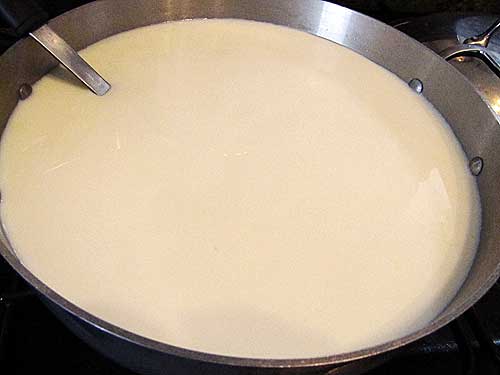 The weight of the milk and the weight of the pot is cut in half. If hefting around big pots and curds from two gallon recipes has been putting you off cheesemaking, baby cheeses are for you! A one pound cheese can be eaten more quickly, more freshly, as well. Sometimes opening a two pound cheese is just too much. I can’t always use that much cheese. (You can, by the way, cut a waxed, aged two pound cheese in half or thirds and re-wax the portions you don’t intend to use right away to maintain freshness. However, re-waxing is extra work. Make baby cheese instead!) 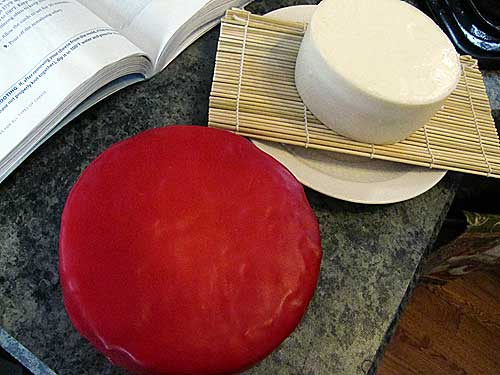 My big cheese pot compared to my cheese pot I use for one gallon (one pound) recipes. 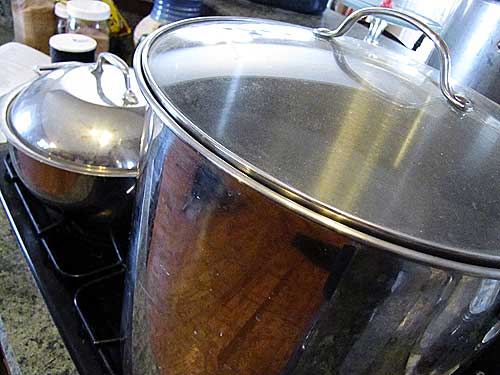 Another benefit of making one pound recipes is that I feel more free to experiment. I’m putting less milk on the line when I try something different. Why didn’t I think of this before?!

Cut everything else in half in the recipe along with the milk. Starter packets come tuned to two gallon recipes. Just open the packet onto a little plate. Divide it in half with a butter knife. 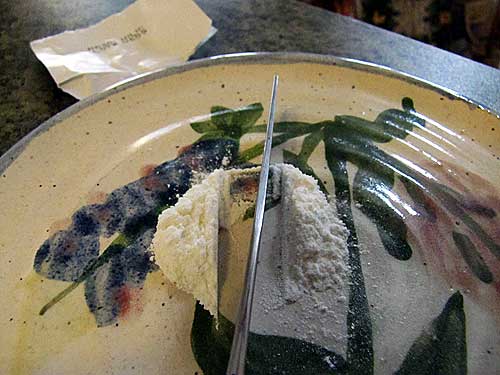 Use half in the cheese you’re making right away and save the other half for later. I use little plastic containers. Just dump the remainder in there and return it to the freezer for storage. (If you think you’ll forget what’s in there, you can stick the labeled packet in there with it to remind you.) 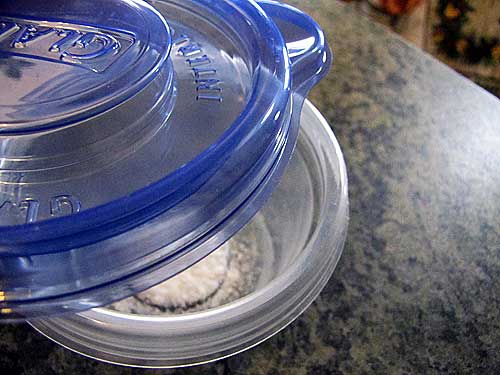 Press as directed, but you may need shorter pressing times. Experiment and explore–after you try a halved recipe once, you’ll know how long it takes to press in the smaller size. (Make a note in your recipe book for the next time.) 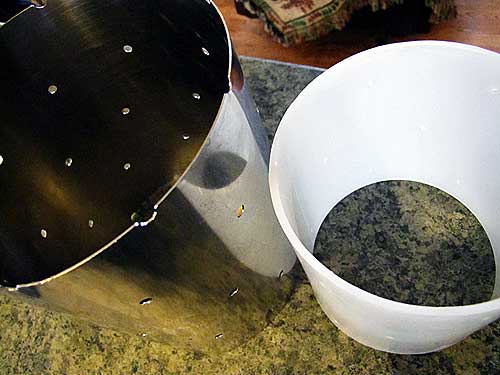 One gallon cheese recipe going into the press in the two pound mold. 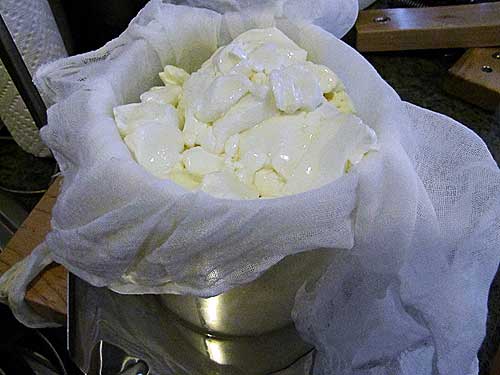 As the cheese presses down, it gets too low so I have to put in some risers on top of the follower so that the pusher can apply pressure. 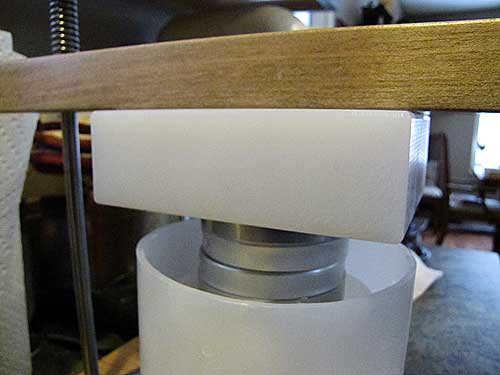 What I use are several of these little canisters of book darts, stacked till it’s high enough to meet the pusher. 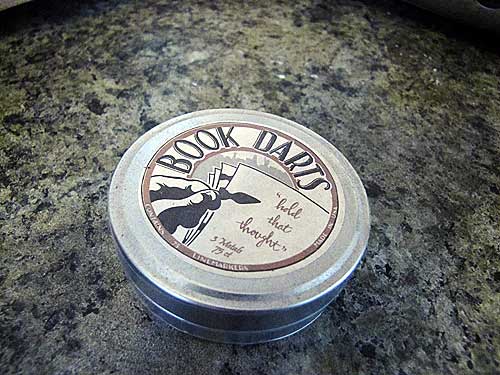 “Risers” can be anything you can find around the house that’ll do the trick.

Now that I’ve conquered my dry curd problem and am coming up with smooth, shiny perfectly-knit surfaces to my cheeses, I’m getting really picky. I don’t like the cheesecloth imprint, especially since I want to try some natural rind cheeses, and no matter how neatly I try to fold the cloth, it makes a wrinkle print. So now when the cheese is nearly finished pressing, I take it out, remove the cheesecloth, and put the cheese back in the mold without the cheesecloth. I put it right down on the drip tray with the follower on top, for an hour or so of final pressing. Only trouble with that is that, without any cheesecloth to contain them, the cheese presses out a little bit into the drain holes on the sides of the mold. It makes my cheese look like it has warts. 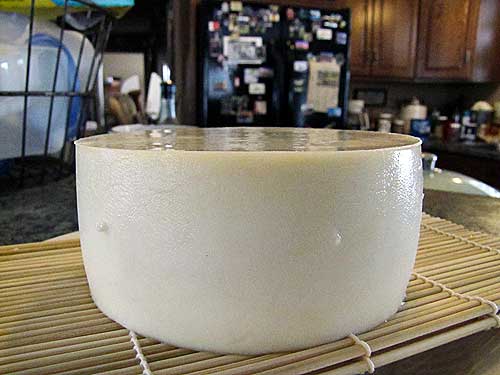 I can’t have warty cheese!!! So now (in the final stage of pressing) I line the mold with parchment paper–no warts. 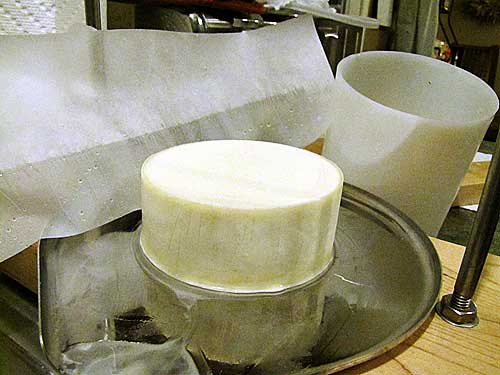 Just look at that cute little baby cheese! (This one’s a baby gouda.) 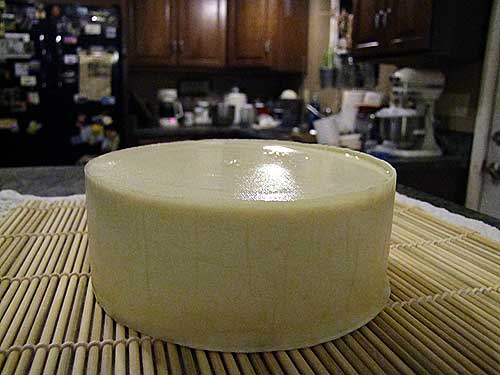 I think I’ll name it Felicity Jane. It’s a girl!!

Our Little Bundle of Joy!