Life is almost back to normal here at Sassafras House. Weston’s gone to town to be with his girlfriend before they head back to Morgantown tomorrow, and I just have Ross and Morgan left here at the farm. Ross will be home until Tuesday. I put about half of the leftover turkey in the freezer, to be pulled out later for various dishes, saving out enough for sandwiches on Grandmother Bread over the next few days. While he’s here, Ross wants to eat the fruits of his labors as much as possible, and that means venison. I’m enjoying cooking with the deer meat so much. It’s delicious, lean, healthy meat–harvested right here on my farm. Ross and I are a good team–he hunts it, I cook it. If “the end of the world as we know it” ever happens, I know who I want here first!

This morning, we have light (very light) flurries, a fire in the Buck Stove, and backstrap under the broiler. Here was Ross’s breakfast plate: 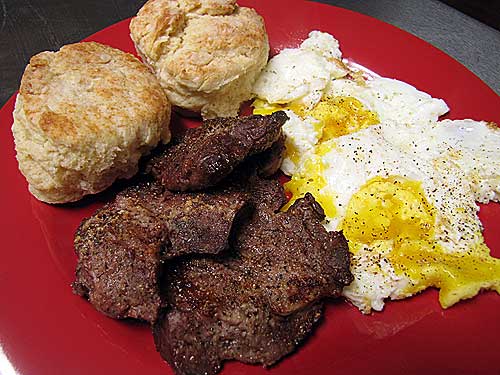 Backstrap–butterflied, cooked under the broiler with salt, pepper, and garlic, with eggs and biscuits. This is so good, we will probably have it again for dinner, with baked potatoes and some hot fresh garlic bread!

The meat I’m working with now is the home-butchered meat. I made some into jerky, set some aside–marked–in the freezer for pressure canning later when I have time, and set some roasts aside, plus the backstraps, loins, and organs. The other deer is still at the high school for processing. (Not sure when that comes back.) It will be processed into standard cuts plus sausage. (Looking forward to the sausage!)

I’ve always loved cooking with venison, on the rare occasions I’ve been gifted with it, but this is the first time I’ve had someone to actually hunt on my own farm and have had the meat to play with all by myself. It’s amazing how much meat comes from a deer. I love deer–they’re beautiful creatures–but like livestock, they can also play a purpose in a self-sufficient life, and it feels GREAT!

If I could just get Ross off the couch, we could eat venison all year! (Just kidding. He deserves to relax! I only whisper, “It’s still hunting season,” very quietly. Only once an hour. Honest!)