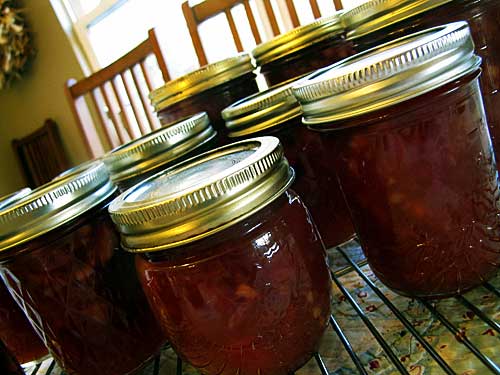 I came up with this recipe when I realized I had some bananas on the verge of going bad. I can’t remember the last time I ate a banana split, but I love the combination of fruit flavors. And the whipped cream. And the fudge. And the ice cream.

And I wondered why I hadn’t had one in so long. But, of course, banana splits can be a bit of a hassle to put together. You gotta have all the stuff. Then I thought–banana split in a jar!!!

I searched around online, wondering if such a thing already existed–because surely I couldn’t be the only one to come up with this idea. I found several recipes that were called banana split, but they weren’t really. Some included cocoa or chocolate liqueur, and they generally combined only strawberries and bananas. Where was the pineapple? AND THE CHERRIES? You can’t have a banana split without maraschino cherries. I didn’t find a single recipe that included all the fruit flavors that make up a classic banana split. Also, I didn’t like the idea of the addition of the cocoa or chocolate liqueur in the jar with the fruit. I knew that would make the mixture dark, which didn’t sound appealing, plus the chocolate syrup isn’t a big deal to put on the ice cream, nor is the whipped cream. Most of us have chocolate syrup and whipped cream in our refrigerators on a regular basis. The hassle in putting a banana split together is all the fruit.

So I created a recipe combining all four of the traditional banana split fruits, ready, able, and willing to go on top of a bowl of ice cream. Just add chocolate syrup and whipped cream!

Don’t know how to can? See How to Can: Hot Water Bath Method.

Printer-Friendly
How to make Banana Split in a Jar:

Mix lemon juice into bananas immediately after mashing to retain the fresh color then combine all the fruit and the pectin in a big pot. 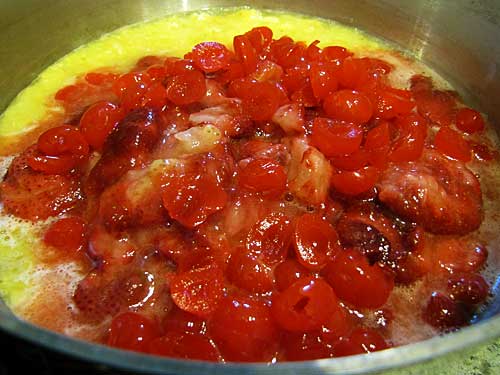 Bring to a boil, stirring frequently. Add sugar (and a dab of butter to reduce foaming). 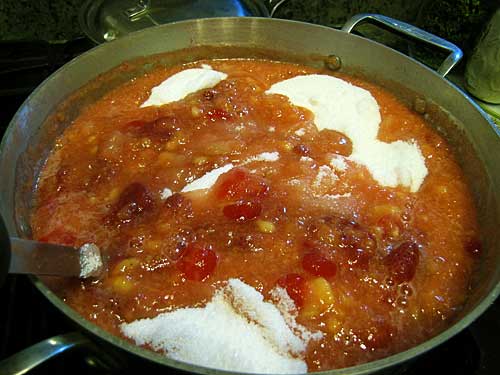 Bring to a rolling boil; boil hard one minute. Remove from heat and add nuts and rum (if using). 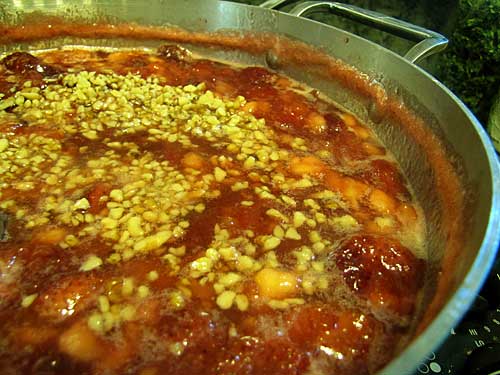 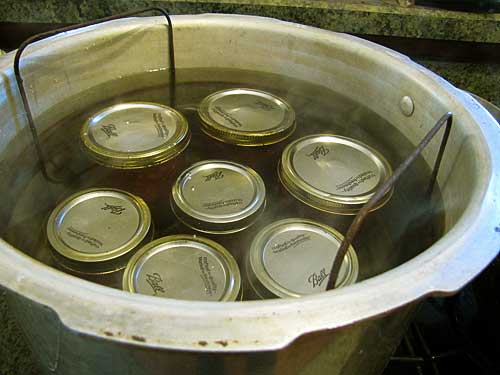 Serve over ice cream with whipped cream and chocolate syrup! How easy is that?

This also makes a great spread on toast or topping for pancakes or waffles, pound cake or cheesecake, and everything else you can think up. I love the combination of fruit flavors in this. The red from the strawberries really takes over the coloring in the jar, but the banana flavor comes through with a tease of pineapple and a fun shot of cherries. When I give this to Georgia, she’s gonna eat it with a spoon right out of the jar.

If you don’t like any of the specific classic banana split fruits, of course you can leave it out and increase the other fruits, or replace it with something else. If you don’t like walnuts, use pecans, or no nuts at all. I added banana rum because I had it. You could use another rum, or leave that out altogether.

I started out thinking I wouldn’t use pectin, that I’d just simmer until it was a thick but pourable consistency. At the last minute, I chickened out, thinking it would be thinner than I wanted. Just tossing that thought out there if you want to give it a try. I decided I preferred more of a conserve or jam consistency so I used the pectin. 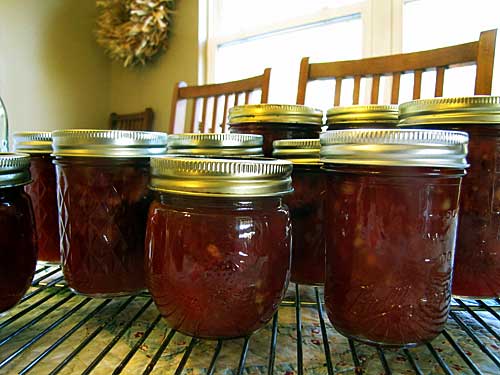 This recipe makes about 9 half-pints. I made a couple batches, some in half-pints, some in family-size full pints. I see holiday gifts! 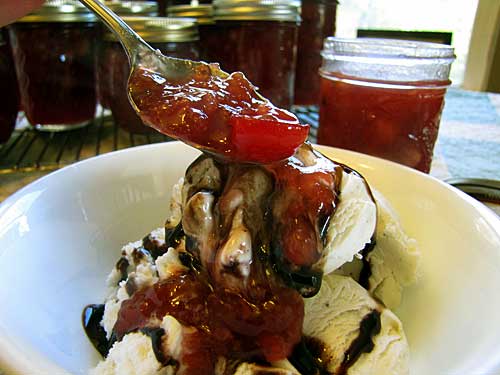 Find this recipe on Farm Bell Recipes and save it to your recipe box.