I knew I had to make this recipe as soon as I saw it. Caramel. Pumpkin. Pecan. BREAD PUDDING. A lovely reader, Brenda, kindly sent it to me. Several days passed. I got all the ingredients together. (I didn’t have the half and half.) The heavens opened. Light shined down. I was ready!!! I had everything!

Only I had completely lost her email with the recipe. Looked everywhere. New mail. Old mail. Deleted mail. (Not that I would delete it, but accidents happen.) The email had disappeared! The heavens closed up and my world went dark.

Okay, that is so dramatic.

But seriously, I was bummed.

However! Brenda came through and sent it to me again and I copied it like ten times to be sure I couldn’t lose it again. And then I made it.

And here it is! It’s delicious and it’s very autumn-ish and Thanksgiving-ish. I bet you could even make it with all milk instead of half and half, it would just be a little less rich. I used fresh pumpkin puree, but you can used canned solid pack pumpkin.

I bet you could even throw a little bourbon in there somewhere. Like a quarter cup in the bread pudding and a couple tablespoons in the sauce. I didn’t, because I’m out. (Too much Maple Pecan Pie with Bourbon.) But you can!

Of course I used Grandmother Bread for the bread in the recipe. 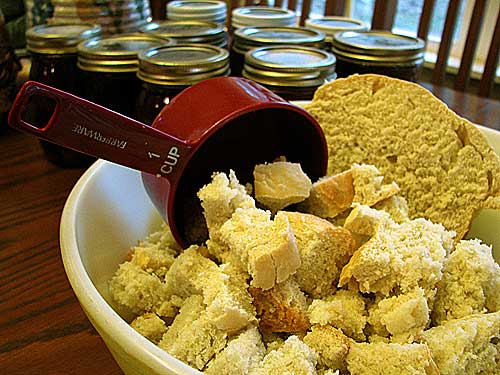 Whisk everything together but the bread in a large bowl until well blended. Add the bread and stir well to coat. Cover with plastic wrap and chill 8-24 hours.

I totally didn’t do that, but you should. If you want to. I baked it right away. Because I’m like that. Impatient. 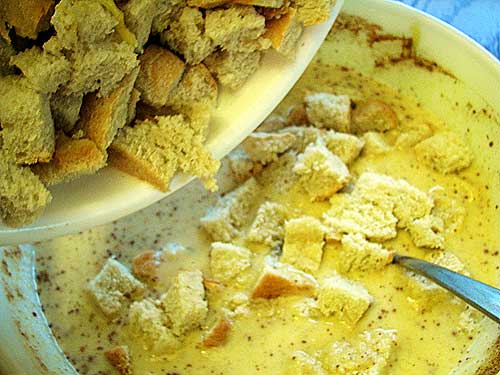 When you’re ready to bake it, spoon the bread pudding mixture into a greased 13 x 9 pan and bake in a preheated 350-degree oven for one hour. The original recipe called for baking this in ramekins. For me, it took a full hour to get done in a 13 x 9 pan. Adjust accordingly if you use ramekins. Also, you might need to cover the top with foil–the original recipe suggested that. I found it unnecessary. It browned just right without it. Except for a few burned nuts. Don’t be picky.

During the last 15 minutes of baking, start preparing the caramel sauce topping. 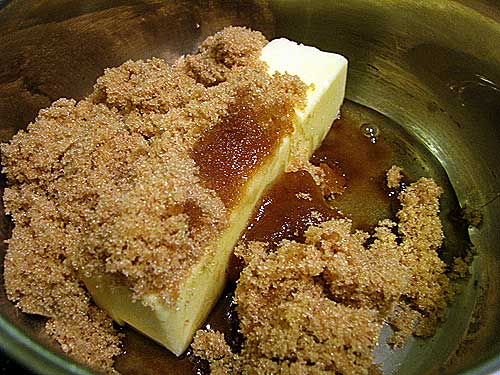 You need to heat the chopped pecans in a skillet over medium-low heat, stirring often, just until lightly toasted. (Maybe five minutes.) Best thing to do is put those puppies in an iron skillet. Meanwhile, cook the brown sugar, butter and corn syrup in a small pot over medium heat, stirring occasionally, for a few minutes or until sugar is dissolved. Remove from heat; stir in vanilla and pecans.

Remove the bread pudding from the oven and drizzle with the caramel pecan sauce. Bake for five more minutes or until sauce is thoroughly heated. Behold the giant pan of bread pudding with caramel sauce on top. 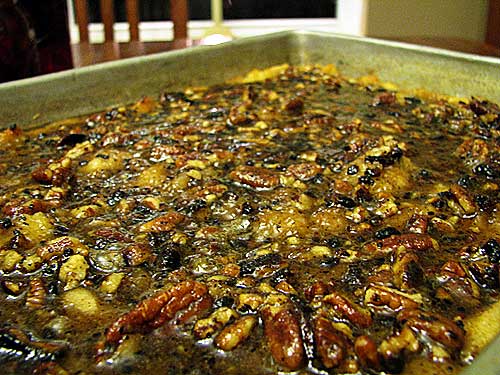 I burned some of the nuts on top. But I didn’t care. 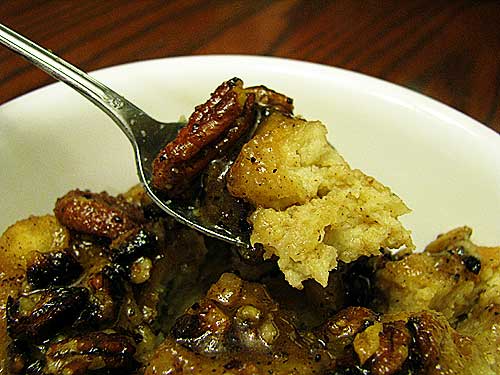 It was THAT GOOD!