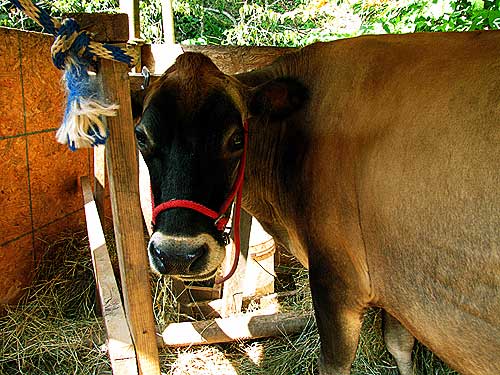 In just another month (by the second week of August), I’ll be taking Beulah Petunia out of service for awhile. The best guesstimate from the vet was that she should be due sometime in October or November. She should be dried off for a couple of months before delivering, and since I’ll be heading to Ross’s boot camp graduation in mid-August, that’s my target date to dry her off.

I’ve loaded up the freezers with milk, light cream, heavy cream, cream cheese, and butter. I can’t stand the thought of having to buy any of that from the store ever again. The true gourmet food is the food you can get on a farm with the fresh and home-canned fruits and vegetables, the farm-raised meat, the eggs picked up from nests, and all the dairy that comes from a cow. The only dairy I buy anymore has continued to be hard cheese, and my goal is to stop doing that, too.

I’ve had a hard time with my hard cheeses since getting a cow of my own. I’ve made hard cheese successfully in the past with store-bought milk, and made it a few times with Beulah Petunia’s milk, but had some discouraging failures. One problem was solved by finally breaking down and turning the air conditioner on because you just can’t air-dry cheese in 90-degree weather. The cheese goes moldy in a day, before you can wax it. I also started using raw milk for hard cheese. It curds up so much better. Once I addressed those two issues, I was back to making successful hard cheeses.

With everything else I’ve put away in the fridge now, I’ve turned my full attention to hard cheese in the last few weeks, putting up three 2-pound wheels of cheese every week. Like everything else to do with having a cow, I’ve gotten a lot better at it with the practice.

I look back on the first several weeks of having a cow and I can’t believe I continued. If you have ever thought of getting a cow, let me tell you–a cow is work. Getting a cow is a life-altering event. It can feel overwhelming at first. But if you want it bad enough, let me also tell you that you can work through it and eventually it all gets a whole lot easier.

I learned to milk better and faster. I learned to restrain the cow more securely and quickly. My hands don’t get sore anymore–my fingers are strong!!! I handle the milk more efficiently. I make cheeses more competently. I skim cream more easily and thoroughly. And most of all, I learned to manage my time around having a cow. For me, managing the time that it takes to deal with the cow and the milk was the most overwhelming part. My days were full already and I had to figure out how to fit a cow and all that milk into it.

I’m also looking forward (very much!) to having a calf. I plan to get Beulah Petunia bred every year and keep her with a calf on a regular basis. A calf provides not only a benefit in itself but also relief in handling all the milk. You can let the calf have it when you don’t want/need it. (Though I find myself using more milk more efficiently now that I’m making so much hard cheese!)

And oh, those few months when the cow’s dried off…… That’s what’s called a vacation. Or time to do more canning.

I think I’ll actually miss milking Beulah Petunia. It’s such a daily habit, it will feel strange to break it for awhile. By the time I’m back at it, she’ll be moved up to her new pasture near the house. While so much effort has been directed at getting the new pasture ready for the sheep, the project of setting up new quarters for the cow was put aside. I’ve gotten used to the daily trip down to the meadow bottom where I milk.

Carrying my milk bucket across the nearly dry creek. 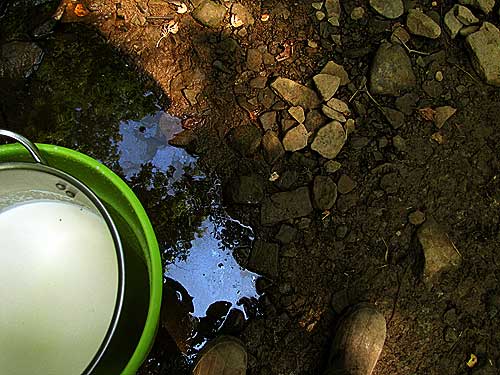 I’ve got her down to about a gallon a day, and will be continuing to gradually work her down over the next few weeks. I stop more often now and just look around, soaking in the experience, feeling a little sentimental that in only a few weeks, it will be over. (For a little while.) And when it’s time to start again, it will be different. She’ll be in her new pasture near the house. What at first seemed so much work, having her down in the meadow bottom, has become routine and comfortable. But–I can’t have her down there in the winter, so move she must! I’ll never get the milk back to the house when the driveway is iced over.

But for now, it’s just a little idyllic. Almost like a Disney movie some mornings. I can hear the sheep baa-ing from their new far pasture. Jack and Poky follow me back and forth to the milk parlor. And always, every day, there is this cardinal that perches by the window of my car. 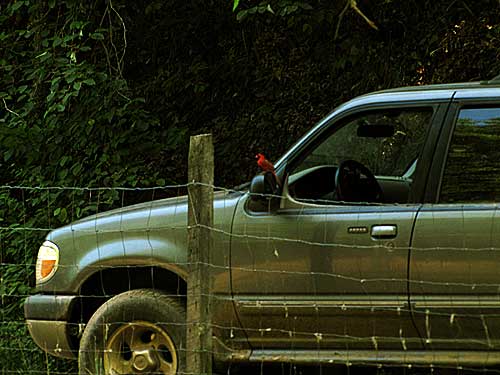 Butterflies swoop back and forth in front of me as I walk across the meadow with my milk.

Disney movie around here. Every day.

Then I go back to the house, passing the Crooked Little Hen and Clover and the Giant Puppy and so on and so forth (I’m SO LUCKY) and get down to work with my milk. I’ve devoted myself to cheddar for now as that’s the cheese we use the most and it’s versatile enough for most recipes. I’ve been yearning to try out various other cheese recipes now that I’ve gained confidence and proficiency with hard cheese from these weeks of practice, and I may try something else in these last few weeks, but getting a good store of cheddar put by has been my first focus.

I’ve been making cheddar three times a week, so there are always multiple stages of dairy processing going on in my kitchen. I take washed press parts out of the dishwasher while one cheese is air-drying in a cabinet (safe from cats)….. 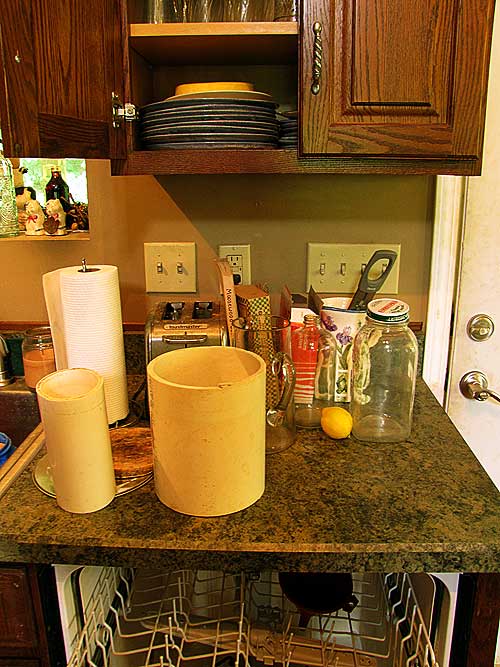 …..while new milk from the morning’s BP session is waiting to be filtered…. 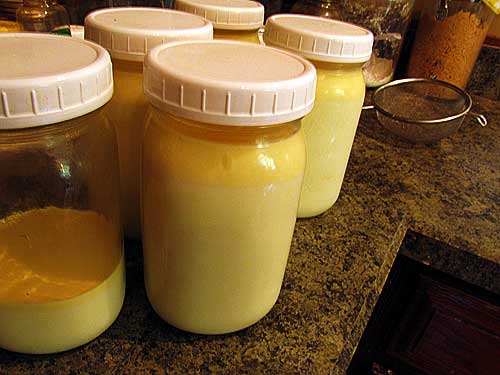 ….and yet more milk from previous milkings is ready to have the cream skimmed. 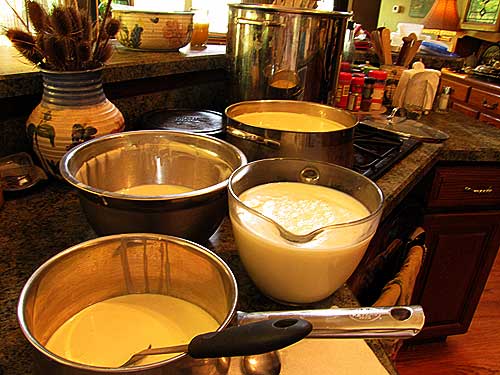 I pasteurize the cream separately and measure out two gallons of the raw milk to go into my huge cheese pot to start what will result in another wheel of cheddar.

I use our fridge on the back porch as a cheese fridge because I can set the temperature properly for aging cheese out there, separate from the regular fridge that holds other foods that need to kept at the normal refrigerator temperature. 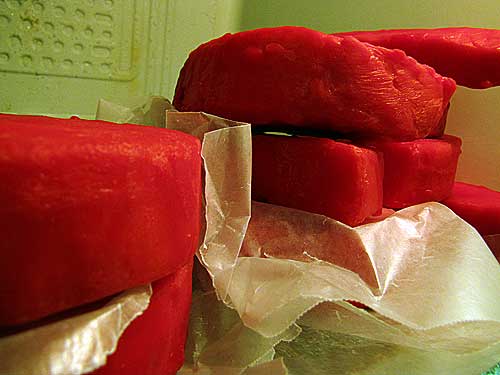 Mountains of cheese, some kept in full rounds, some cut and waxed in halves, and the latest cheese waiting to be waxed. 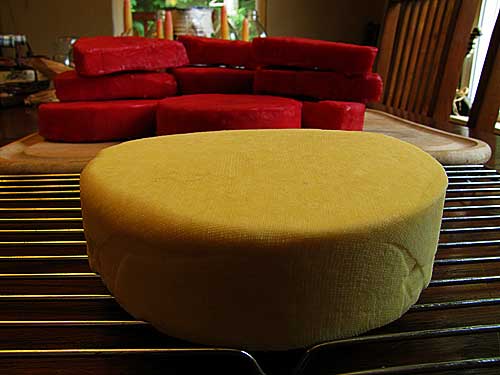 Cheddar should be aged at least three months, and it’s even more wonderful if you let it age a full year. I’m planning to age this cheese at least four to five months before breaking into the first one, but I hope by this winter to be at the point where store-bought hard cheese is finally a thing of the past around here. 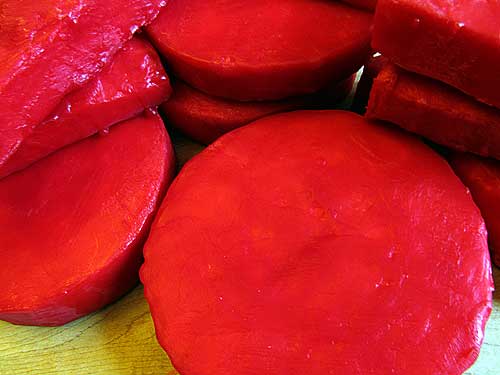 I can hardly wait! (It’s very hard to wait for it to age!)