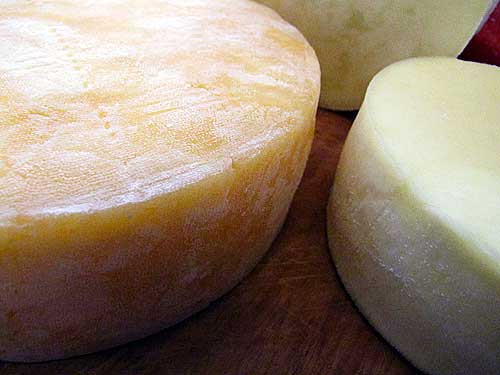 I’ve gotten interested in cheese rinds lately as I’ve lost interest in waxing cheese. Cheese wax costs money and, honestly, it’s just a hassle. You can wax most cheeses, even if they’re not traditionally aged in wax (such as Gouda), though some cheeses, such as Romano and Parmesan, are best aged rubbed in olive oil, and other cheeses, such as Camembert, depend on the development of a natural rind and should never be waxed. But just as you can wax most cheeses that aren’t traditionally waxed, you can not wax cheeses that are traditionally waxed. Most cheesemaking instructions will direct you to wax cheddar, Jack, and so on, but you don’t have to. In fact, it’s become very popular to not wax. It’s more artisanal to make a natural rind–it is, after all, how cheeses were originally aged before humankind figured out that we could seal cheeses to protect them from nasty mold. But just what is a natural rind?

There are several different types of cheese rinds. One is the “bloomy” rind which you find on such cheeses as Camembert and Brie. These are white mold-ripened cheeses and the rind is critical to their success. A connoisseur will tell you that you should also eat the rind as it is an important piece of the flavor story for these cheeses. Personally, I can’t stand the taste of the rind on these cheeses. It grosses me out. Maybe I’ve just never had a good one? I don’t know, but I don’t like it. (I haven’t yet tried to make any white mold-ripened cheeses.) See some pretty bloomy rind cheeses here.

“Washed” rind cheeses are made with the red bacteria linens, such as Muenster. The rind is “washed” or actually just lightly wiped with saltwater while aging, but sometimes may also be washed with brandy, beer, cider, etc. The rind is edible, but some people find it a little unpleasant. Oddly, I’m more inclined to eat this type of rind than the “bloomy” rind. See some pretty washed rind cheeses here.

Have you noticed how expensive all these cheeses are yet?!

Other cheeses that are often waxed can be made with a “natural” rind as well. A true natural rind is just that–the cheese is left to age unwaxed in a temperature- and humidity-controlled environment. (Your cheese cave, whatever your setup is, old fridge with hygrometer, etc.) Natural rinds require tending. Not only do the cheeses need to be turned regularly, they must be cleaned of unwanted molds and….mites. MITES. The moment a cheesemaking expert from New England Cheesemaking (when I inquired about natural rind-making) said the words “natural rind” and “mites” in the same sentence, I knew I was never making one.

However, I do want to share this awesome gallery of natural rinds aging in cheese caves. Are those cheeses beautiful or what? So okay, I should never say never. Maybe when I feel as if I am more expertly set up, I will try some true natural rinds. I do think you have to develop a taste for natural rinds. If you’ve grown up on Kraft cheese (like me), you may not find natural rinds immediately palatable. Though they are very pretty.

There are actually some professional cheesemakers who vacuum-seal their cheeses for aging. It approximates waxing and is cheaper. You can see right through the seal to what the cheeses are doing. I have a Food Saver vacuum-sealing thingy and I might try that. Another alternative for home cheesemakers that is even simpler, in place of waxing, is to place the cheese in a sealed baggie. I’ve been doing that quite a bit lately and I’ll report on how that comes out as the cheeses age. It’s much less hassle than waxing, doesn’t take the tending of a true natural rind as the cheese is protected, and like vacuum-sealing, it allows you to see the cheese as it ages. It’s not sealed as tightly as a vacuum seal, of course, but for shorter aged cheeses, such as three or four months, it’s worth the experiment.

Box of some bagged/some waxed cheeses–in the winter, I use a shut-off room in the basement for aging. It’s cold there. 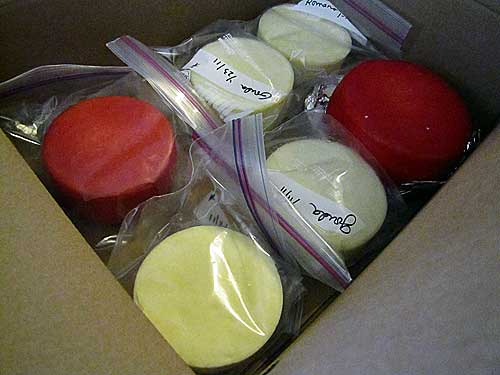 I’m going to also try it with some longer-aged cheeses. I’ve got some Romano in a bag now. (Romano also has to have the rind oiled, but it’s easy enough to remove from the baggie and put back.) The point of waxing is to protect the rind from unwanted bacteria as it ages, but there is more than one way to skin a cat–or protect the cheese–if you prefer a “sealed” rind over a natural one. Yet another alternative is to “bandage” cheese by rubbing it with lard then wrapping it in cheesecloth. I haven’t tried this yet.

And–another method of wrapping cheese to age–leaves. Check out the leaf-wrapped cheeses here. Gorgeous! Even the descriptions are to die for. From one of the leaf-wrapped goat cheeses– “…dipped in plum brandy and sprinkled with coarse black pepper before being wrapped in two chestnut leaves to mature.” This is a cheese I need to marry.

Some of my recent cheeses–mostly Gouda, some cheddar and Romano: 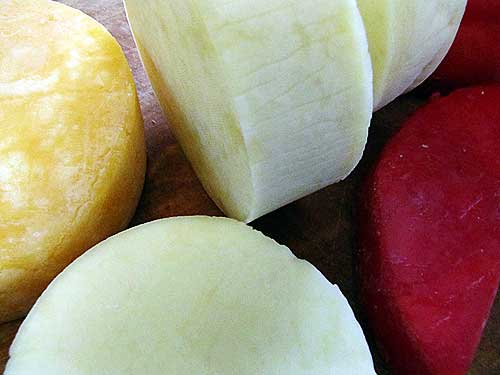