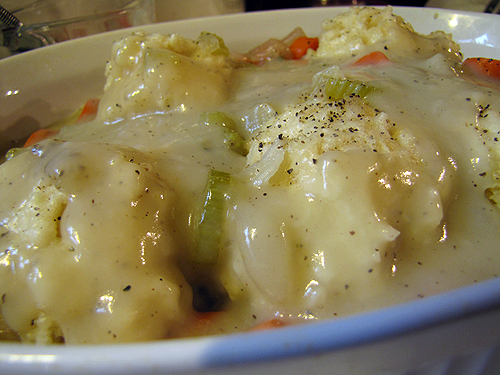 Chicken and dumplings is one of those quintessential comfort food dishes that has reigned supreme for decades because it’s simple, inexpensive, nutritious, and just plain good. Chicken was on sale last week at the grocery store, so this was actually what I made for my holiday main course this weekend–because it’s not only inexpensive, it’s good enough for a holiday table. (Don’t tell anybody it’s cheap, they don’t need to know.) You can use any chicken pieces you want. It was chicken thighs that were on sale, I used thighs. 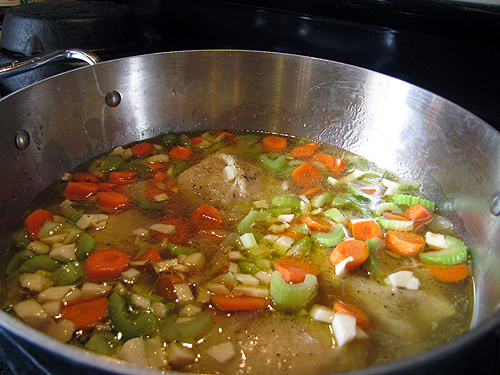 Time for dumplings! Dumplings of the savory kind are little balls of dough that are most commonly made of flour and boiled in broth. There are other types of dumplings, such as the sweet kind that are fried (see Old-Fashioned Apple Dumplings) or other savory dumplings made with a combination of flour, potatoes, and other ingredients, filled or not filled, baked, fried, or boiled, and rolled or dropped. We’re talking dropped dumplings today, and the most common type of dumpling seen in chicken and dumplings.

Combine the flour, seasonings/herbs, and oil in a bowl. Start adding milk gradually. Stir in enough milk to bring the mixture to the consistency of dropped biscuit dough. The dough mixture should be moist, but hold together. 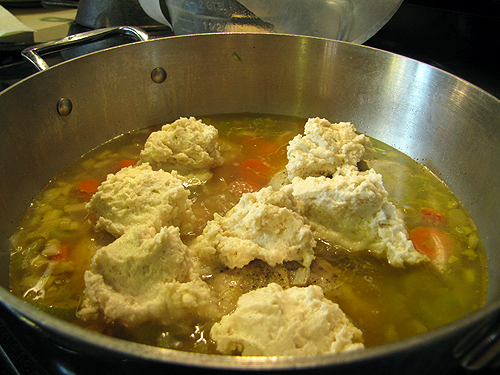 Drop the dumplings by heaping tablespoonfuls on top of the chicken and vegetables in the pot. Cover and simmer 12-15 minutes until dumplings are fluffy and cooked through. Remove the chickens, dumplings, and vegetables from the pot with a slotted spoon, transferring to a baking dish. 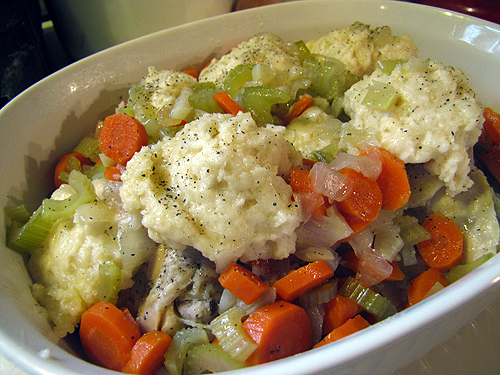 Skim fat from the broth. Place about 1/2 cup of the broth in a cup, adding 1/4 cup of flour. Whisk together then add back into the broth in the pot, whisking and simmering to a smooth gravy. Season to taste with salt and pepper.

Pour gravy over the chicken and vegetables. At this point, you can keep the dish warm in the oven or serve immediately! 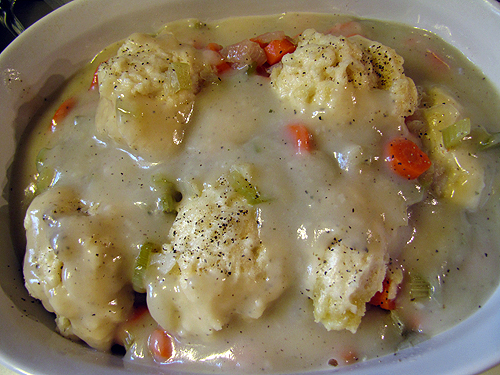