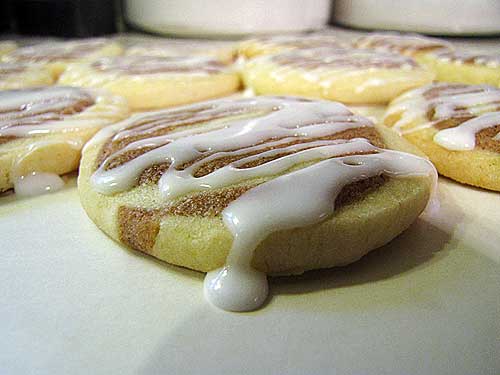 There’s this little boy at school who, I think, may have a crush on Morgan. Well, he’s not really a little boy, but work with me here. Little boy sounds tolerable and non-threatening, while teenage boy sounds disturbing and nightmarish. At least when it comes to Morgan, who is of course just a little girl. 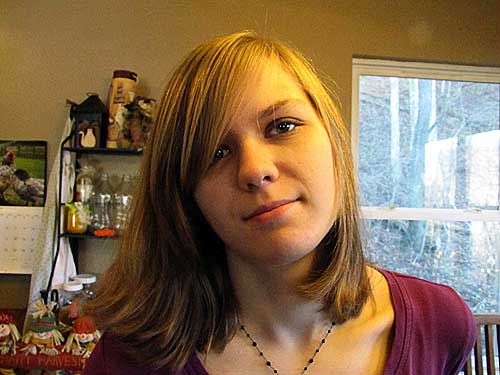 A little girl who is 16. Though this photo was taken when she was 15. I think I’ll keep using it as affirmation of my denial of her growing maturity.

Anyway, now that we’re all on the same page and understand that we are just talking about little children–

He likes her. For her birthday, he gave her a small cookbook called “Cookies” from Gifts for Giving, along with a spatula. And a meat mallet. (???) Now, Morgan doesn’t like to cook and mostly refuses to cook. This is a position she has taken explicitly to cause me pain. It’s similar to the steadfast stance she took for several years during elementary school on reading. She only read if she was forced to read at school, and she adamantly and repeatedly stated that she hated reading. Since I’m an avid reader and a writer, this was a difficult cross to bear. How could I go so wrong? Did I not read her stories every night from the time she was a baby? I was about ready to fall on my sword when suddenly in middle school she became an obsessive reader. Now, and for the past few years, you can hardly pull her nose out of a book. In fact, what inspired my interest in getting Kindles, for her and Weston and myself as well, was that she and Weston were amassing books in their rooms at an alarming rate and I needed to stop the amassing by converting their reading obsessions into digital form that didn’t take up so much space.

I can only hope that her aversion to cooking will take the same path, so I don’t push her about it. And I can only wonder if this boy knows her BUT AT ALL to get her a cookbook as a birthday present. He was lucky she didn’t take the meat mallet and pop him on the head with it.

Or maybe he knows her after all because when I perused the cookbook I found that some of the recipes were take-offs on refrigerated store-bought cookie dough, so there was actually a limited amount of real cooking involved. But even that was too much for Morgan, so she handed me the cookbook and the spatula and bounded up to her room with her new fun toy, the meat mallet.

And that’s all right. If she’s going to have boys interested in her, she might as well be carrying something with which to whop them.

Meanwhile, back in the kitchen, I decided to try out one of the recipes and convert it to a from-scratch recipe. This is a “cinnamon roll” take on the classic pinwheel cookie. Rather than use refrigerated store-bought dough for the base, I used homemade sugar cookie dough.

Cream butter and sugar. Add eggs and vanilla; blend. Mix in flour, baking powder, and salt. Divide dough in half. Set aside one half, leaving the other half in the mixing bowl. Add the brown sugar and cinnamon to the bowl. Mix with an electric mixer until the brown sugar and cinnamon is completely incorporated. Wrap each half separately and chill for at least an hour.

Remove the dough from the fridge and divide each half into two more halves so that you have two parts plain dough and two parts brown sugar/cinnamon dough.

Roll the first plain half into an 8-inch by 8-inch square on a lightly floured surface. Look, I even measured. 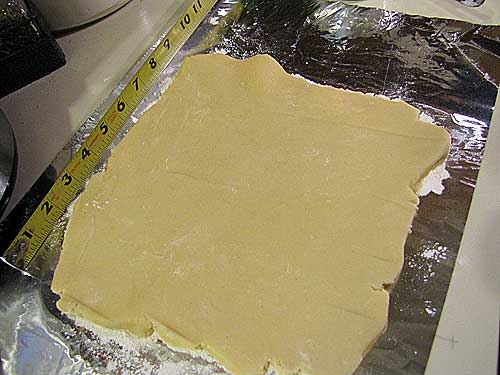 Roll the first brown sugar/cinnamon half the same way. 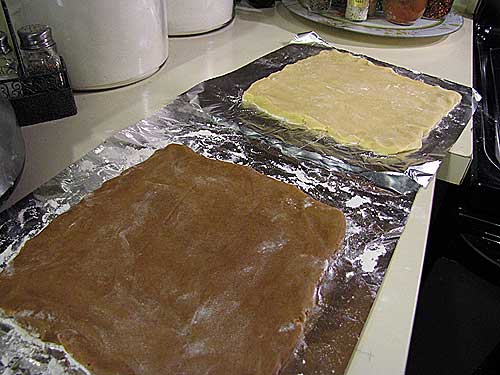 The easiest way for me to transfer the dough was to fold the brown sugar/cinnamon dough over. 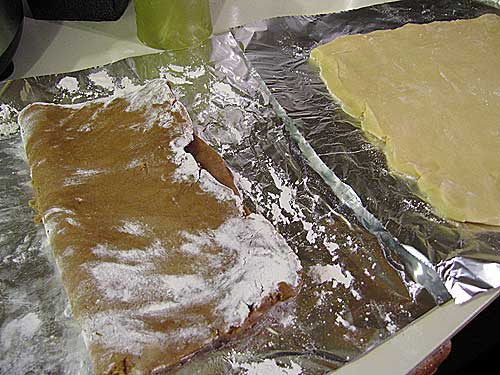 Carefully lift it up and move it on top of the plain dough. 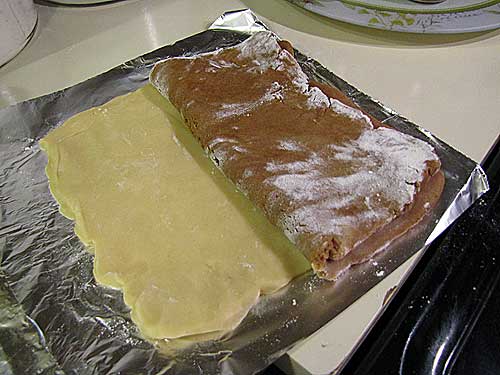 Unfold it and spread it out. 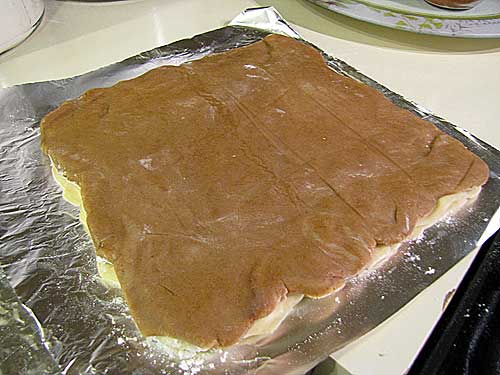 I lightly rolled it also to press the two pieces together. Now roll it up. 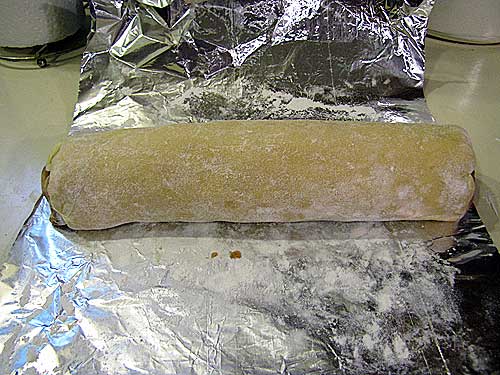 When you’re ready to bake, take the frozen dough from the freezer and let sit at room temp for a few minutes, just to soften enough to slice–but not get too soft. Preheat oven to 400-degrees.

Slice the dough into cookies and place on greased baking sheets. 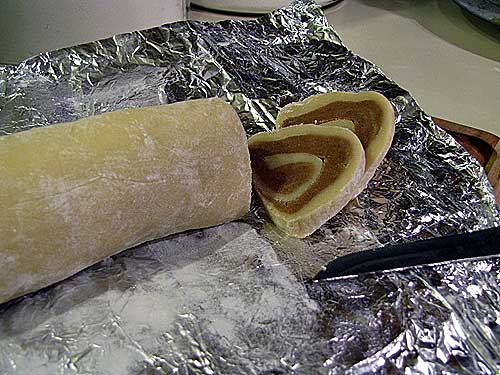 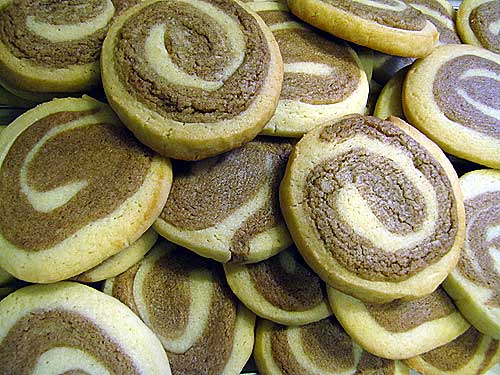 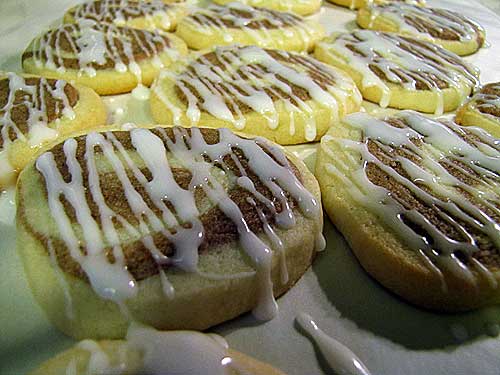 And they taste like little cinnamon buns, too! This recipe makes about 3-4 dozen cookies. I gave a third of the cookies to my cousin for helping me with my furnace. I sent another third of the cookies to school with Morgan to give to the “little” boy, and kept the rest hanging around here for our snacking pleasure. I think Clover would like one, too. 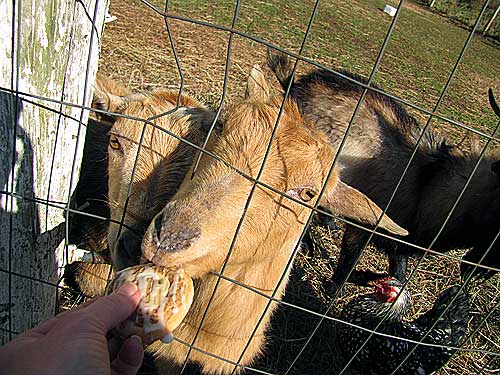 P.S. Let the icing set completely then they are stackable.