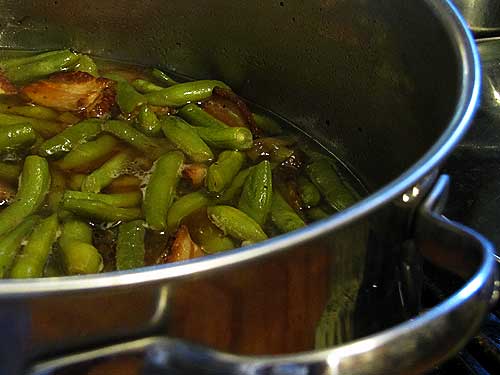 I hesitate to venture into the hot bed of controversy over what is the best way to cook up a mess of green beans in the country (what? you didn’t realize this was an issue? where have you been?), but it’s that time of year. Time for fresh green beans picked from the garden and hauled straight to the stove. I’ve got green beans on my mind. We all know the one and only way to cook green beans is how your mama made ’em, but here I go where angels fear to tread!

You can start with either a quart of home-canned green beans, fresh green beans, or green beans from the store (if you are desperate). The burning questions then are as follows:

Do you add bacon grease? Or actually add bacon? If you add bacon, do you slice it up first or not? Do you pre-cook the bacon or put it in raw? How long do you cook the green beans–till they are just crisp-tender or until they are well and thoroughly dead? What about the seasonings, just salt or something more? Do you include sliced onion? Some people are real renegades and even add quartered potatoes, sliced carrots, or mushrooms. (Of course, we all know that’s not real country-style green beans, now don’t we? The potatoes are supposed to be on the side.)

Trust me, you can get a heated debate going with just a few of these questions. People are pretty adamant about their green beans. When I first started living at the old farmhouse, I found that out when my cousin gifted me with some fresh green beans and I cooked ’em wrong. Wrong to him, at least. I grew up with my mother cooking green beans lightly, as in not cooked till dead. And forget the bacon. My mother was opposed to fat (and salt). I thought my cousin might never let me have any green beans again after I cooked that batch, but since then I’ve learned to cook them his way, and eventually to cook them my way.

Unless my cousin’s coming over, then I cook them his way because I’m generous like that.

Okay, let’s cook up a mess of green beans! Here’s how I cook ’em, and you tell me how you cook yours.

*If you aren’t using peppered bacon, you’ll want to add some pepper. 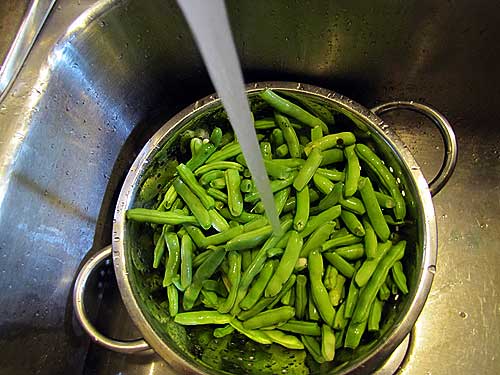 This is more than a quart of fresh green beans, but we don’t care. This isn’t an exact science. Green beans are forgiving.

Chop the bacon in pieces. 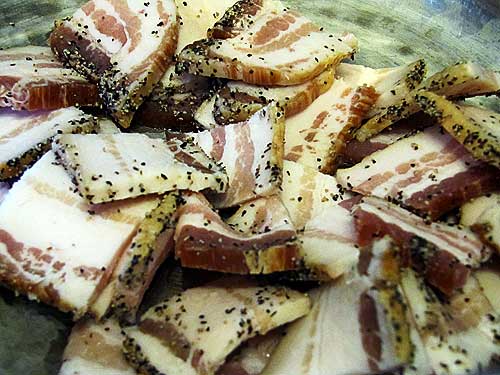 I leave them pretty chunky. You can make them smaller or larger. Start the bacon frying on medium in a large pot. Slice onion and add to pot to cook with bacon. I love the caramelized taste to the onions that comes from frying them along with the bacon. 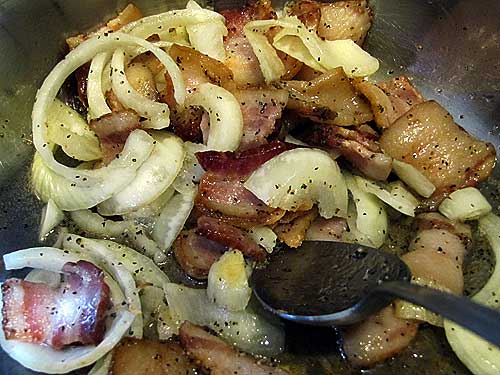 You can add more or less onion, and slice it any way you like. I slice it in pretty big pieces so that Morgan can pick it out.

When the bacon is about half-cooked (just starting to brown a little bit) add green beans. (DO NOT drain bacon grease! Well, you can drain a little bit, if you must, but don’t go out of control here.) 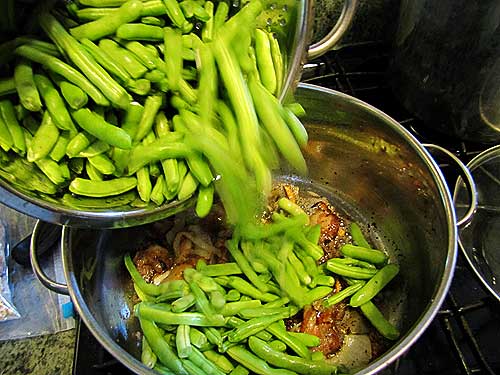 Add sugar, salt, seasoned salt, and just enough water to cover. (If using canned green beans, the liquid from the jar or can may be enough.) Bring to a boil. 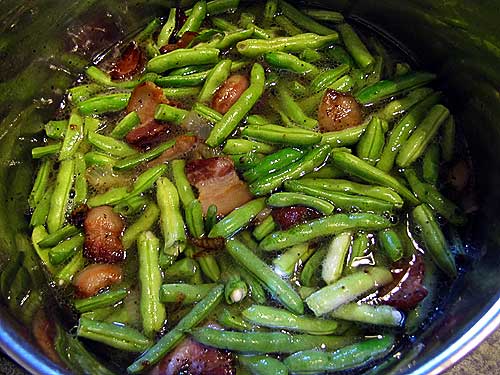 Turn the heat down, cover pot, and simmer for at least 45 minutes. 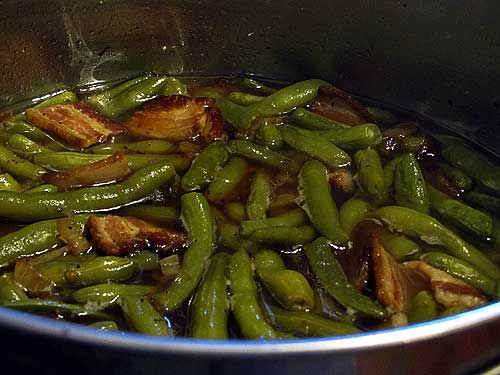 I like to stop right here, but if you really want to cook them down hard, after the 45 minutes you can take the lid off and turn up the heat. If my cousin is coming over, keep going until almost every bit of liquid is cooked down.

When it’s cooked to your liking, adjust seasonings to taste. This is a fantastic down-home side dish, or a meal all by itself. 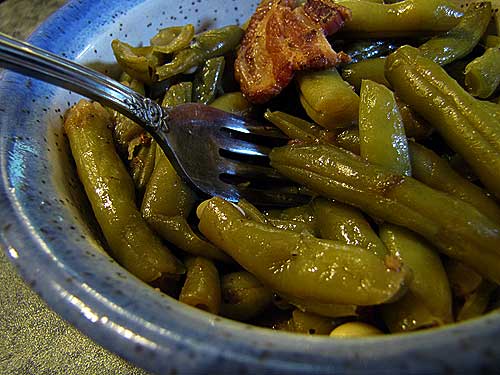 You’ll need some cornbread with that!

See this post at Farm Bell Recipes and save it to your recipe box.