A mousse is a light, chilled dessert that incorporates egg whites to create an airy texture, and is a classic in French cooking. I’m preparing for the art and cooking retreat here in April. Chocolate mousse is one of the recipes we’ll be working on in class. It’s delicious, so nobody minds if I make it over and over before the retreat. It disappears fast around here.

This recipe is based on Julia Child’s, with a bit of streamlining, mostly to make things work for me in a class setting, but it also makes it a bit easier in the home kitchen as well.

Printer-Friendly
How to make Chocolate Mousse:

Melt chocolate in a small pot with the coffee. Remove from heat and add butter, stirring to melt. 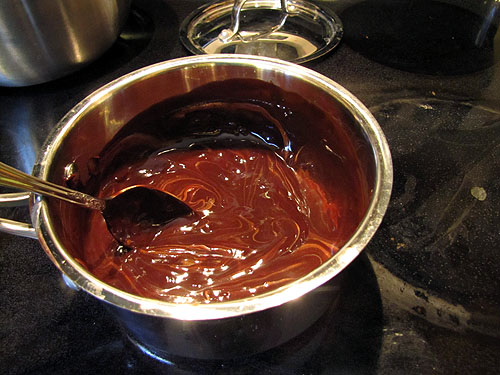 Julia uses orange liqueur. Some people don’t like using any kind of liquor in recipes, so I tried it with orange juice and it works just fine. It would work just as well, also, with any flavor liqueur or a nice dark rum. 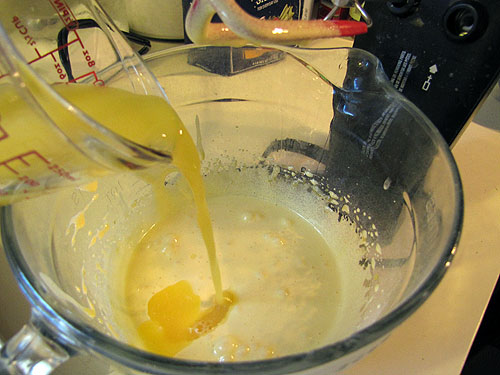 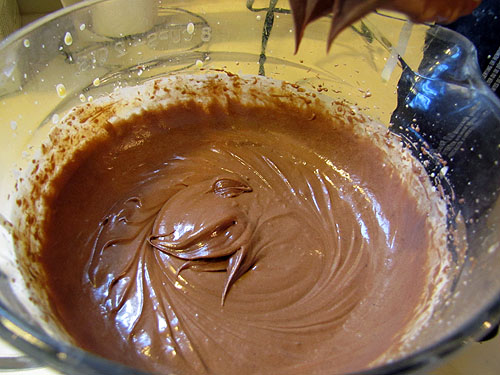 I remember one time a few years ago at Stringtown Rising I did a post where I tried to beat egg whites by hand. You know, making kindred spirits with pioneer women. (What was wrong with me back then? Ha!) I can tell you I’ll never try to beat egg whites by hand again. It’s best done in a stand mixer so you can just go away and leave it to do the work for you, but my stand mixer is in the studio. The studio is almost finished being repaired, but I still can’t get in there to cook yet. I used my hand mixer at home, which is definitely not my preference. But it beats mixing with a wire whisk by hand for sure! 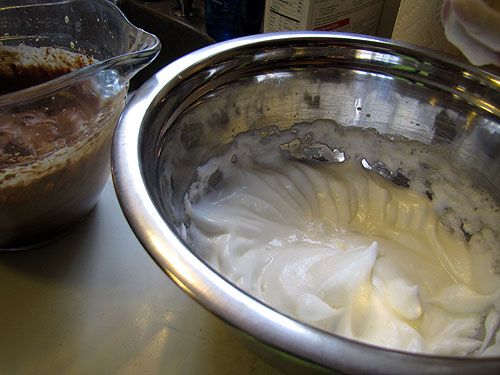 From here, you can divide into serving dishes or leave it one large dish–then chill at least two hours or overnight. I divided some into two small jam jars, for me and Morgan with supper, and left the rest all in one bowl because I’ll be giving it to my neighbor. I left room at the top of the jars to add some creme anglaise, which I’ll be making next. Creme anglaise is a very handy light custard sauce, an absolute crucial classic in many French desserts. If you watch the Food Network show Chopped, you’ll often see chefs going for a creme anglaise in the dessert round. 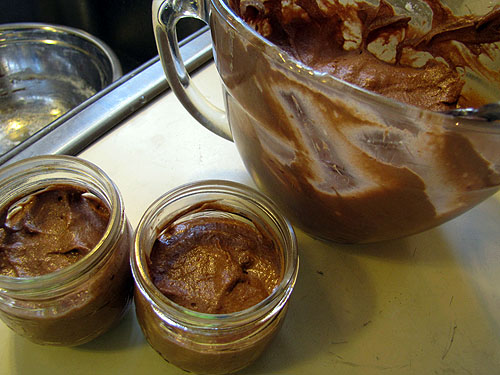 You can find the recipe for creme anglaise here, but let me say one more thing about the mousse. According to Julia, who is quite emphatic about it, many people will call a chocolate mousse topped with either whipped cream or creme anglaise “pots de creme” which is utterly abhorrent to our dear Julia! A “creme” in French cooking is a custard, PERIOD. Mousse is not a custard. And even topping it with creme anglaise (which IS a custard sauce) does not turn it in to pots de creme. 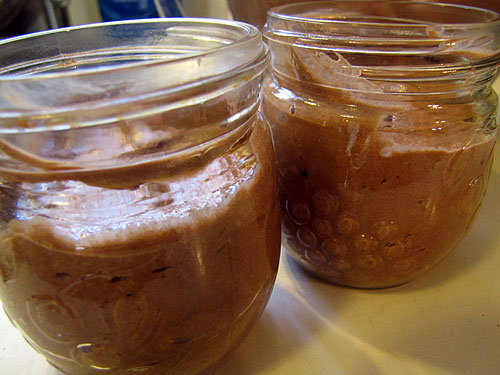 Just letting you know. You don’t want to make Julia mad, do you?