From the time I was a child, I was fascinated, nigh upon obsessed, with all things English, from medieval castles to kings to, yes, scones. The magical scones of all the English literature I inhaled through my teenage years and into my college degree in medieval British literature. Tea and scones. Try to find a figure in English literature that isn’t at some point sitting down to tea and scones. With jam. And clotted cream!!!! I was so obsessed with consuming this delightful treat myself that it was an absolute must when I visited England ten years ago. I was not leaving without sitting down to some genuine English tea and scones, not to mention the clotted cream. 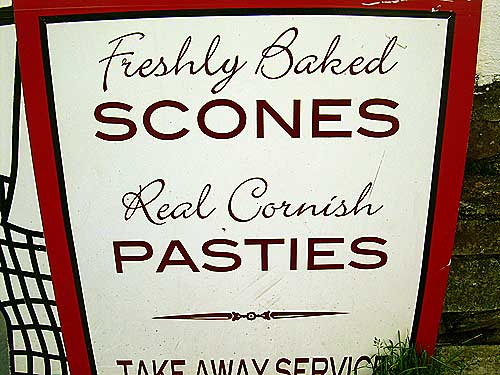 Here is the plate of tea and scones and jam and clotted cream I sat down to one day at a tea shop in the village of Cerne Abbas in Dorset. 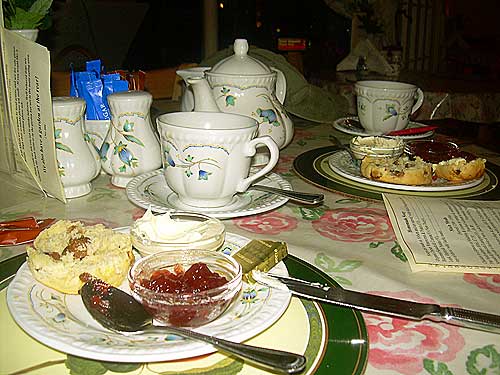 What are scones? In America, we tend to think they’re biscuits. They look similar to biscuits, but they are NOT biscuits, especially not Southern Biscuits made with soft southern flour and heavy on the butter for the flaky texture. They’re closer to Northern Biscuits, made from hard northern flour with less butter and a more crumbly texture, due to the similarity in the type of wheat used in both scones and Northern Biscuits. But in the case of scones, while they also contain less butter than Southern Biscuits, they’re still rich, that richness coming out of the egg in the batter, setting them apart from any traditional American biscuit at all. 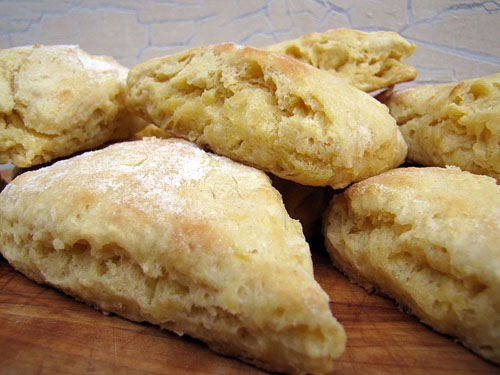 The scones I make are just like the scones from the village in Cerne Abbas–rich, crumbly but soft, made with a hard northern flour, butter, baking powder, sugar, salt, milk, and egg. You can get ’em without going to Cerne Abbas–though I can’t help you with the clotted cream, sorry! (I have a cow, so I have clotted cream, heh.) Traditionally, they are most commonly made plain or with currants. Currants are not raisins, by the way, anymore than scones are biscuits! True currants are black currants, not the Zante currants commonly sold as currants. (Check the label!)

Printer-Friendly
How to make English-Style Scones:

Combine dry ingredients in a mixing bowl; cut in butter until mixture resembles coarse crumbs. Beat egg, add to dry ingredients, gradually add milk until dough clings together, wet but not soppy! Roll out on a floured surface. Cut in triangles. Bake on a greased baking sheet at 450-degrees until browned, about 10 minutes. Call the cow for some clotted cream!

You can also get ’em in my Etsy shop! I sell them plain, or with traditional currants, as well as in about two dozen out-of-the-box varieties from beer cheddar to pineapple coconut! Get ’em on Etsy here.