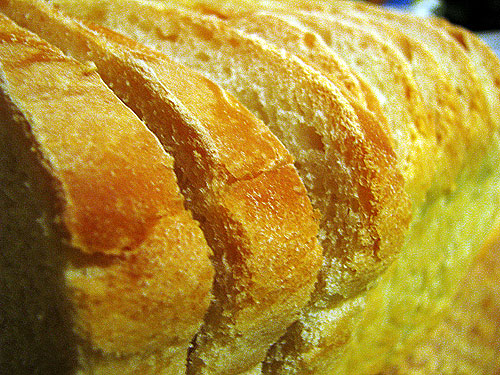 Wake up to fresh-baked Grandmother Bread! Really. You can. Here’s how…..

I’ve always frozen Grandmother Bread, either as loaves or rolls or as pre-cut slices ready to take out just what I need when I need it. But freezing the dough? That was a new one, and it was time to experiment!

I froze Grandmother Bread dough two ways. In the first method, I made the dough–and before even giving it a first rise, I immediately stuck the ball of dough in a greased bowl, covered lightly, in the freezer. An hour later, the ball of dough neatly frozen, I removed it from the bowl, wrapped it in plastic, and placed the wrapped ball of dough inside a sealed freezer bag. When you freeze an unshaped ball of dough before the first rise, you can use it in numerous ways. You can turn it into a loaf, rolls, caramel buns, apple-streuel ladder loaf, cinnamon crispies, and on and on! (Click here for lots of ideas!) It’s a delight waiting to happen.

In the second version of the experiment, I let the dough rise the first time. I punched it down, shaped it into a loaf, and placed it in a greased loaf pan. 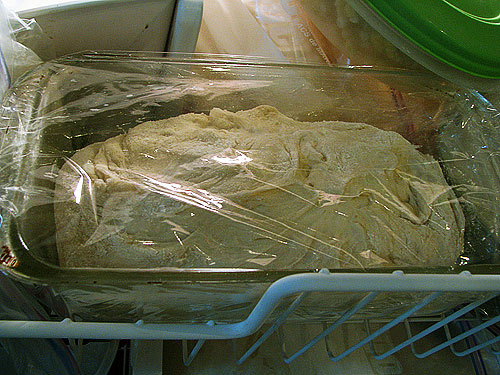 I stuck it, still in the pan, straight into the freezer (covered lightly with plastic). After an hour, I dumped it out of the loaf pan, wrapped it in plastic, and placed it inside a sealed freezer bag. 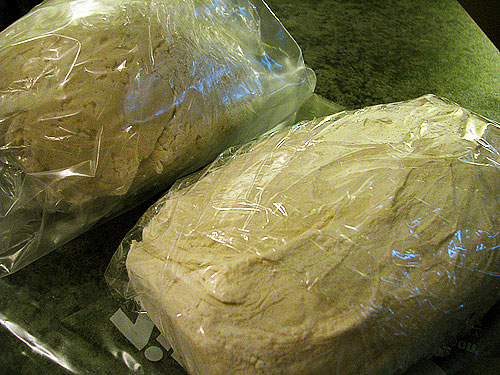 When I removed the dough the next day from the freezer to actually use, I placed the ball of dough into a greased bowl and placed the shaped loaf into a greased loaf pan. I gave the shaped loaf a second rise and stuck it in the oven to bake. The ball of dough had to take its first rise, then a second rise (which I did as a loaf also as I was in need of sandwich bread at the time).

How long can Grandmother Bread dough be frozen? I don’t know as I only left it in the freezer for a day, but I would suggest that as with most freezer items, several weeks to a couple of months would be optimal max freezer time. It probably could be frozen for longer and still be fine, but you would run the risk of freezer burn (possibly). But, like, you would leave it in the freezer for months? You could resist it for that long???? The main purpose here, of course, is to make some easy great weekend breakfasts, or to get ready for company or holidays, providing great fresh bread without the on-the-spot effort while you’re busy with other things. (If you try out freezing it for six months, let me know how it goes.)

How did the experiment work out? GREAT. Both ways worked perfectly. Why did I do the experiment? Because I’ve had questions about freezing Grandmother Bread dough, similar to the shortcut way frozen bread dough is sold in stores. I’m always up for a baking experiment, so it was fun. And while I’m so in the habit of making bread nearly every day as needed, it opened my eyes to new ways to make Grandmother Bread easier on days when I’m busy. On days when I have time, I can put an extra ball of dough, or extra shaped loaf, in the freezer–to bring out to bake hot and fresh on busier days. And wow, think of the breakfast possibilities! The dough took about six hours to thaw out and rise (both ways, shaped and unshaped)–and even then, I could have let it sit a few hours longer (if I wasn’t so impatient). This means I could take out frozen dough before I go to bed–and wake up to either a ball of dough ready to be shaped into breakfast cinnamon crispies or caramel buns, or a pre-shaped loaf ready to stick in the oven. FRESH HOT Grandmother Bread in the morning without even doing anything! 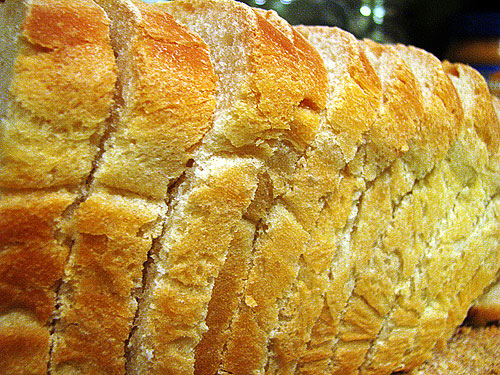 See this post on Farm Bell Recipes and save it to your recipe box.