Recently, I received this tantalizing comment from Sarak K on my Garlic-Rosemary Butterhorns.

“I’ve made these a few times now and love them! Last time I used the dough to make crackers instead of rolls. Roll them thin. Poke them with a fork. Don’t let them rise before baking. Pull them out when they start to turn golden brown. At the potluck I went to, they were the first thing to disappear, and everyone raved about them.”

I make focaccia occasionally, usually using the standard Grandmother Bread recipe (water, no milk or egg) with an add-in of a couple tablespoons of olive oil. I roll it flat, but not very thin, in an 8 x 12 pan with 1-inch sides. I poke it with a fork, brush olive oil over the top, and sprinkle with sea salt. (Bake as usual at 350-degrees.) I usually eat focaccia with olive oil, balsamic vinegar,and dipping herbs, or split it for sandwiches. My Garlic-Rosemary Butterhorns recipe is a richer version of Grandmother Bread with milk, egg, and butter instead of oil. I could definitely see it as a delicious focaccia, but I’d never thought of trying it as crackers.

Don’t know how to make bread? Learn with a nine-year-old here, and dive into the story behind the bread here.

How to use add-ins of milk, egg, and/or oil can be found here. You can use other liquids, too, of course–buttermilk, whey, tea, even juices! Grandmother Bread is the ultimate one-stop recipe shopping for bread. Learn one recipe, you can make them all. Try it, you’ll love it. Homemade bread will change your life.

Okay, back to Garlic-Rosemary Butterhorns-turned-crackers. The world over makes all sorts of flat breads (tortillas are a flat bread! so is pita bread–and pizza!), and there’s a reason for that. Flat breads are easy! A lot of flat breads are cooked right on top of the stove (or fire)– and they generally cook faster because they’re thin (to varying degrees, depending on the type of flat bread). With Sarah K’s cracker suggestion, I realized I’d been narrow-minded with my focaccia-baking. Why not crackers? Could probably flatten balls of Grandmother Bread dough into nice pitas, too. I bet you could even fry up a gordita-style thick, chewy tortilla out of them!

So many experiments, so little time.

In a small saucepan, combine milk, butter (or margarine), salt, and sugar. Heat on Low until the butter is melted. In another bowl, combine one cup of the flour and the yeast. Add melted butter/milk mixture plus the egg, rosemary, and garlic. Stir to combine; add remaining flour gradually, mixing with a heavy spoon until dough becomes too stiff to continue stirring easily. Add a little more flour and begin kneading. The amount of flour is approximate–your mileage may vary! Continue adding flour and kneading until the dough is smooth and elastic. Let dough rise in a greased, covered bowl until doubled. (Usually, about an hour.) Uncover bowl; sprinkle in a little more flour and knead again.

Now here’s where we’re going to diverge from the butterhorns recipe and go off into flat bread-land.

You could make just a regular focaccia. As noted above, I use an 8 x 12 pan with 1-inch sides. The dough for one loaf of Grandmother Bread fits just right. Grease the pan then roll out the dough. You could also do this on a greased baking sheet. You don’t have to roll it out into a square or rectangle. You could flatten it into a circle. Make it as thick or thin as you like.

Here, I was trying to figure out how thin to roll them for crackers. Since I was going to roll the dough so thin, this is half the dough, rolled out on a baking sheet. 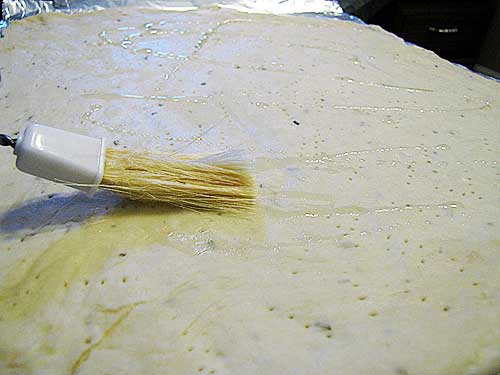 I poked it with a fork, brushed it with olive oil, sprinkled on the sea salt, and baked at 350-degrees.

Unfortunately, this batch turned out to be too thick for a cracker, but too thin for focaccia. It was tasty, and something in between, but not what I was going for.

With the other half of the dough, I rolled out part of it very, very thin, and rolled the other part thick, about 1-inch, as I would for focaccia. 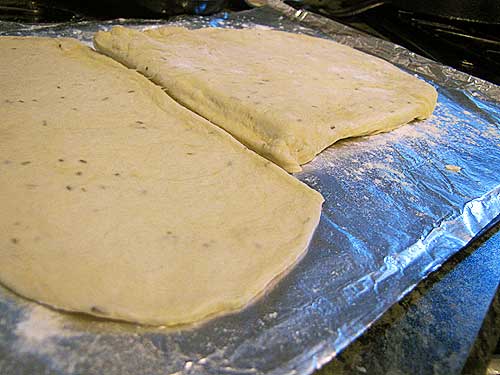 I baked them together on the same baking sheet, though I had to leave the focaccia portion in longer. How long you will bake any flat bread varies by how thin you roll it, 10-20 minutes for most flat breads. (Not counting tortillas, which cook up much faster!)

This time, the “crackers” really turned out like crackers! And they were good! I can totally see these disappearing at a potluck. They were crispy and full of flavor. 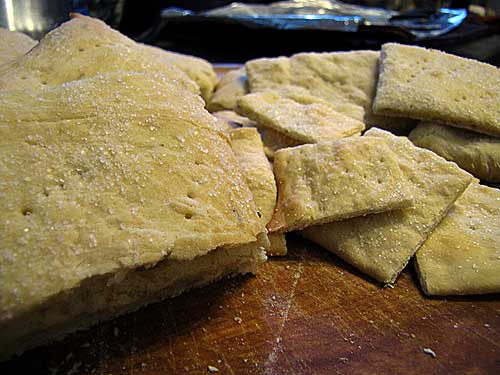 I’ll be trying some other flat bread experiments soon–and so can you! Go ahead, flatten your bread. It’s fun and delicious.

Thanks for the inspiration, Sarah K!