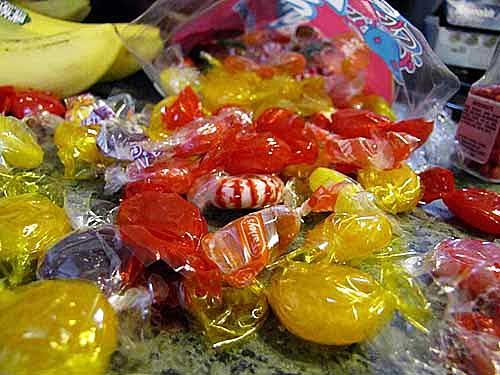 This idea started out as an ornament. My cousin’s wife, Sheryl, told me about some cute little hard candy ornaments she saw at a party this past weekend. Hard candies melted together into shapes like wreaths, trees, snowflakes, and so on. She inquired as to how they were made and was told to put the candies–touching–in whatever shape you like on wax paper and bake them in a 250-degree oven for 5 minutes. Then you can hang them on the tree or whatever.

I decided I had to try this.

Don’t blame Sheryl because she was just reporting, but that didn’t work for me. None of it. First of all, the candies won’t melt in 5 minutes. It takes 10 minutes. Second, the candy sticks to the wax paper. I tried without cooking spray and with cooking spray.

After much experimentation and many failures, I did finally end up with one ornament that I scraped off the wax paper the best I could and hung on the tree. 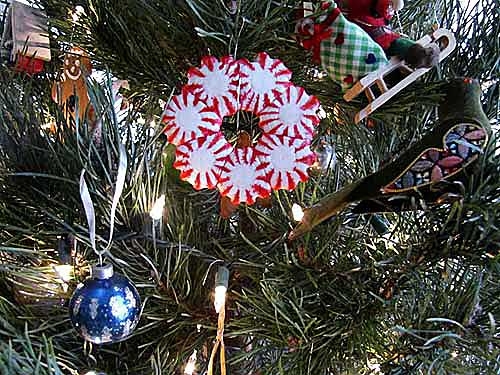 That’s okay, but I wasn’t too impressed. Maybe I’m just not artistic enough to make cute hard candy ornaments, so don’t let that stop you if you want to try. I wasn’t enamored enough with the ornament idea to keep experimenting in that direction, but…..

Then I had a brainstorm. Wouldn’t that be cuter if it was a LOLLIPOP?

Oh yes, yes it would!

But I had to solve the wax paper sticking problem. I made another one using parchment paper (no cooking spray). Perfect! It peeled right off. 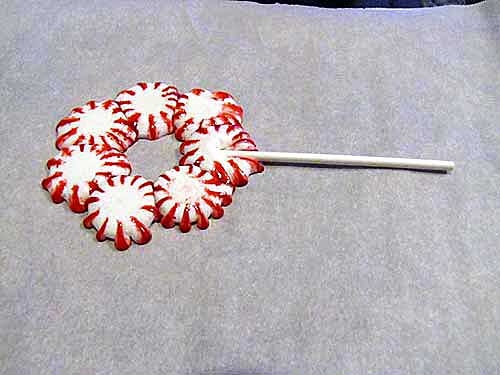 And the lollipop stick poked right in.

At first I was making them using 7 peppermints in a circle, as a wreath. Then I tried putting one candy in the middle. 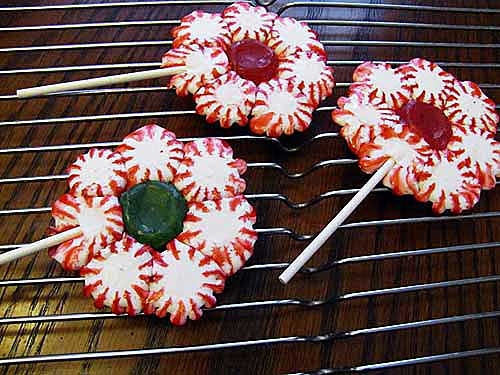 Then I tried six to make the circle and I liked that better. 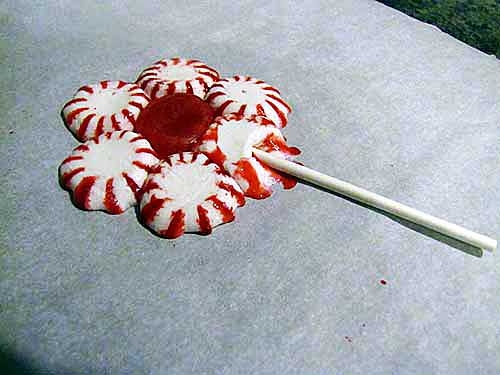 To make hard candy lollipops, you need lollipop sticks, hard candies, and parchment paper, that’s it. Arrange your hard candies how you want them, making sure they are touching. Bake on parchment paper at 250-degrees for about 10 minutes. I found that some of the hard candies melted faster than others. (The peppermints got soft faster than the other colored candies. But NONE of them melted in 5 minutes.) Test the candies you’re going to use first to see how they melt. You don’t want to over-melt–they’ll turn to useless goo. You want them to soften enough to melt into each other and also to be soft enough to poke a lollipop stick into them.

As soon as you take them out of the oven, poke in the lollipop stick. Let cool and harden before removing from the parchment paper.

And if you think that is cute for the holidays, try spring flowers! 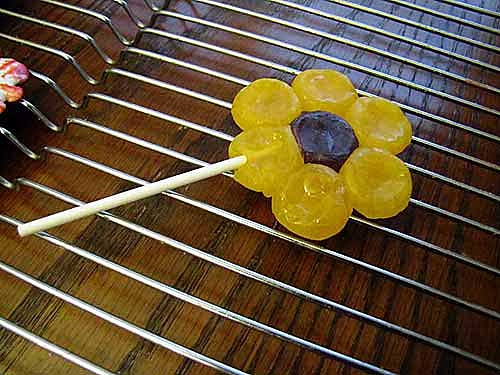 You could make these to suit any holiday. So easy and fun and kid-friendly. Kids can help and choose their own candies to make their lollipops. If you have little kids in your house, how can you not make these today? For gifts, wrap them in a plastic baggie and tie a ribbon around them. They would be really fun for kids’ parties, too. Makes me wish I had little kids again instead of big ones with tattoos. 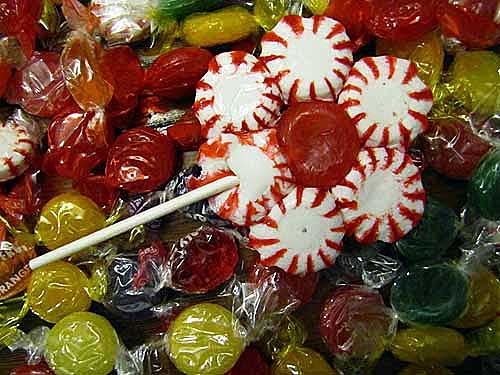 Lollipops for everyone! Somebody send me a little kid. I have lollipops!

Update per the comments–apparently, the correct temperature for melting the candies is 350-degrees for 6 minutes. I bet that works!