Corn season is winding down, but corn is still out there at the farmers markets and it’s the good stuff. Sweet and fresh and real. At this past weekend’s retreat, we made the most of it.

Let me show you how many ways we used an ear of corn. 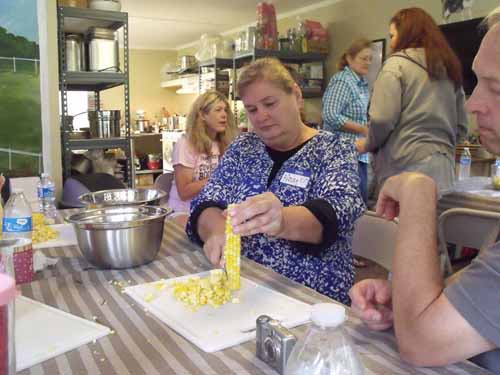 First, of course, the corn was shucked, then parboiled, then the kernels cut off the cobs. The corn kernels were set aside for a corn casserole the next day.

I have several corn recipes, if you’re looking for a good one!

Next, the bare naked cobs went back in the pots to simmer down into corn cob jelly.

How to Make Corn Cob Jelly

Then the cobs were sliced into half-inch rounds, which were dehydrated to add into the potpourri mixture attendees were putting together with pickings from the wild.

And then, later, I snatched up the husks to lay them out to dry. I’ll do something crafty with them this fall. I’ve got a few ideas here:

See? Corn–a side dish, corn cob jelly, corn cob potpourri, and corn husk crafts. That’s a lot of ways to use every ear of corn. Corn–it’s more than a casserole! 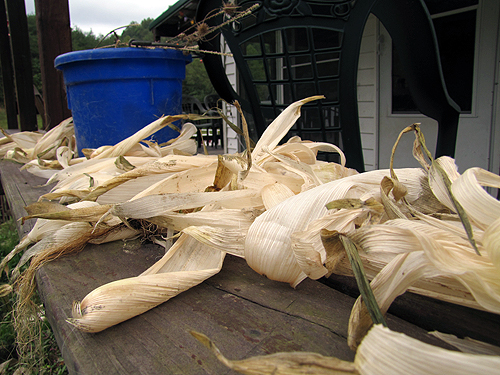 Here’s a whole list I compiled a while back of things to do with corn cobs.

1. Give it to the animals. Chickens and goats love to peck and chew every bit of sweetness out of a cob.
2. Make a corn cob doll.
3. Make a corn cob pipe. (If you’re handy and into that.)
4. Stick a nail or hook in one end of the cob. Slather cob with peanut butter and seeds-–tie on a tree branch as a bird feeder.
5. Boil down for vegetable soup stock. (Similar to the method for making corn cob jelly-–use the corn liquid as soup stock instead.)
6. Potpourri–-slice cobs in thin pieces, dry, then sprinkle with scented oil. Makes a very pretty addition to a potpourri bowl!
7. Dry for firestarters.
8. In the old days, dried, they were used as pot scrubbers.
9. Poke a long nail in each end of a dried cob and use as a paint roller to make a neat pattern. (Also can use corn cobs held upright as a brush, or cut in half to use the even, cut edge to stamp patterns.)
10. Corn cob wine!

What do YOU do with corn cobs?