I’ve been making biscuits since I was nine years old, and I make good biscuits! Just ask my workshop attendees! They come sneaking back to the table to grab just one more when I start putting breakfast away so we can go milking. The type of biscuits I make come from my Oklahoma grandmother. My mother learned to make yeast bread from my West Virginia grandmother, but she already knew how to make biscuits and cornbread–her mother made that. If she’d learned biscuits from my West Virginia grandmother, maybe I’d have grown up on southern-style biscuits. Anyway. One day recently, Rodney said, “Your biscuits are really good, but sometimes I miss my mother’s biscuits.”

Now don’t be hard on him. I’d actually asked him if there was anything he wanted me to cook that I wasn’t cooking.

I asked him how his mother made biscuits. He didn’t know a recipe, but he said he knew she used self-rising flour and buttermilk, and that they tasted like a Tudor’s biscuit, though they didn’t look like one.

For those of you who aren’t in West Virginia, let’s take a moment to explain the bizarre phenomenon of the West Virginia fast food restaurant chain Tudor’s Biscuit World. There are a few locations in Ohio, Kentucky, and Virginia, but by and large, this is a West Virginia marvel that celebrates, nay worships–and elevates!–the humble biscuit to its deserved height in the celestial plain. The biscuits are gigantic, a good 3 1/2 inches in diameter, tall, fluffy, and buttery, and genuinely made from scratch on site. The biscuit, while the clear star of the show, is just the starting point, though. They specialize in biscuit sandwiches, offering a wide array of differing combinations of ham, bacon, sausage, steak, pepperoni, potatoes, apples, eggs, and cheese in breakfast items named things like the Rocket, the Mountaineer, the Mary B, the Thundering Herd, the Tootie, the Miner, etc. You can also get pancakes and other various breakfast platters, and even lunch sandwiches including cheeseburgers not to mention West Virginia staples like fried bologna or pinto beans and cornbread, but c’mon. That’s just filler on the menu. At Tudor’s Biscuit World, it’s all about the biscuits.

I’m not much on going out to fast food restaurants, but one weekend when we were going out for the day, Rodney said, “Don’t make breakfast today. You need to have a Rocket.” So he took me to Tudor’s and bought me a Rocket. It was so big, I could hardly finish it. But I managed. A Rocket is steak, potatoes, egg, and cheese. On a biscuit. He said he could eat two, though he only got one. The next time he took me to Tudor’s, I cut mine in half so he could have one and a half. Because half a Rocket is enough for me. By then, I was starting to analyze the biscuits.

And getting obsessed with the biscuits.

He said they were biscuits like his mother’s, so I knew they had to be made with self-rising flour. I started researching and uncovered the southern-style biscuit, where it’s all about the flour. These are biscuits famed from the south because they’re made with the soft winter wheat that grows in southern climates, so before the day when massive grocery chains shipped flours all over the country, it was originally only available in the south. This soft winter wheat flour is lower in protein than the hard wheat grown in northern states. Today, you can find the higher protein wheat in all-purpose or bread flours, while the lower protein southern wheat is found in self-rising flours and cake flours. Less protein in the wheat means lighter and more tender results, while higher protein enables yeast breads to rise higher.

I still love my mother’s biscuits, by the way. Isn’t whatever our mom made always the best? It’s just a different type of biscuit, made with higher protein all-purpose flour, the texture being more that of an English scone. If my mom was alive to stick the end of a knife down into one of her biscuits and pour some molasses in and hand me the plate, I’d kick Tudor’s to the curb any day for that.

But back to my Tudor’s obsession. Since the above scenario will never happen again.

I started experimenting, making southern-style biscuits. I bought some self-rising flour. I didn’t tell Rodney. I made the biscuits. I produced the biscuits like a magician revealing a rabbit. I used my biggest biscuit cutter in my best reproduction of a Tudor’s gigantic biscuit. I used self-rising flour, butter, and buttermilk. Rodney said, “That looks like a Tudor’s biscuit.” Then he tried one, and said, “That tastes like my mother’s biscuits.”

I was still curious about his mom’s biscuits, even though I’d accomplished the concept on my own, so one day after that he took me to his parents’ house and his mother made biscuits. I’ve never seen anyone make biscuits like this before. She just dumped the self-rising flour in the bowl, without measuring anything, and poured in the buttermilk. No spoon in sight, by the way. She stirred it up with her hands. Then she floured a dinner plate and dumped the biscuit dough onto the plate, tore off pieces with her fingers, set them on a greased pan and mashed them down with the palm of her hand. We had brought one of the biscuits I’d made for her to inspect. She ate it and said, “Why do I need to show you how to make biscuits? This is just right.” But I was curious, and it was interesting to watch her make them. And I could see why he’d said my biscuits tasted like his mom’s biscuits but looked like Tudor’s. She mashes her biscuits pretty flat. Which is fine, and tastes just as good, but I was going for a combination of her biscuits’ taste and texture and the Tudor’s look.

Here’s how you get that! (With measurements. Mostly.) And while his mom’s biscuits will always be the best–because they’re his mom’s–my obsession is now satisfied. I have achieved perfect southern-style biscuits that you could put in a paper sack and tell somebody you brought in from Tudor’s and they wouldn’t know the difference. But of course you’d want to tell them that you made them so they’d be impressed!

How to make Southern-style Biscuits:

Dump the flour in a bowl. Cut in the butter. 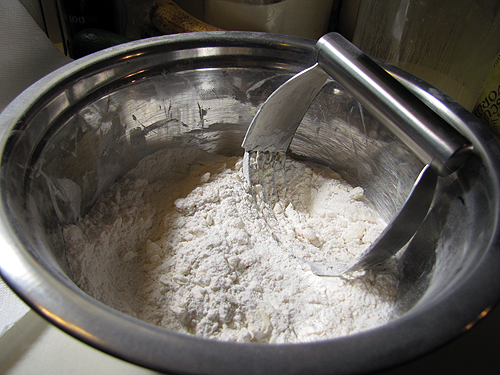 Stir in enough buttermilk to make a wet dough. 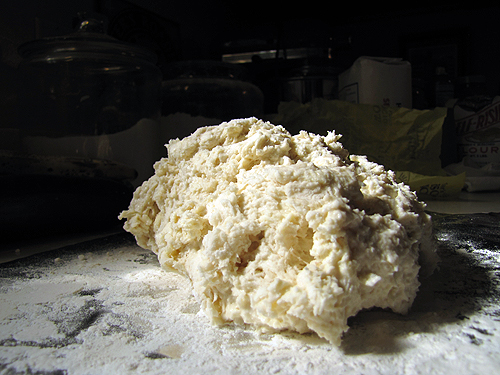 Spoon the dough out onto a floured surface. Flour the top of the dough so it’s not too sticky to handle and knead a couple of times, then roll out the dough. 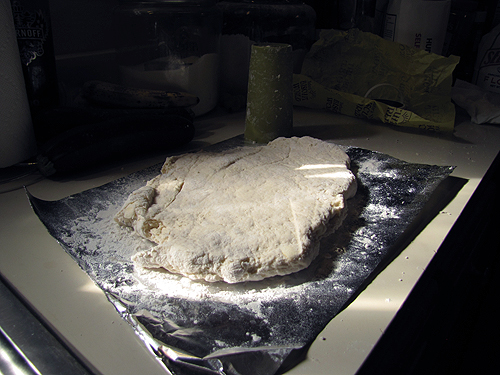 Fold the dough over. 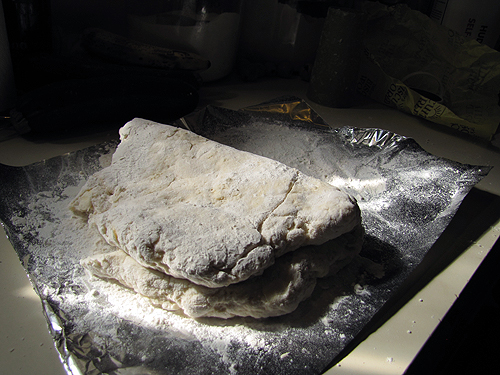 Flour again and roll out again, and fold over again. Roll out once more–not too thin if you want a tall, fluffy Tudor’s biscuit, and cut out with a large biscuit cutter. 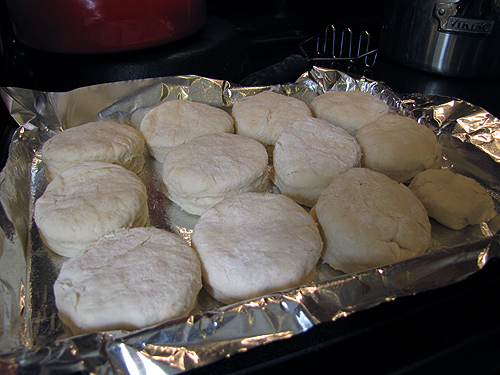 As you can see, it’s simple math to go up or down in the quantity of biscuits–it’s 1/4 cup butter per 1 cup self-rising flour, so you can easily make more or less.

Place on a greased baking sheet. Bake at 450-degrees about 10 minutes–keep an eye on them. Brush the tops with melted butter when you take them out of the oven. 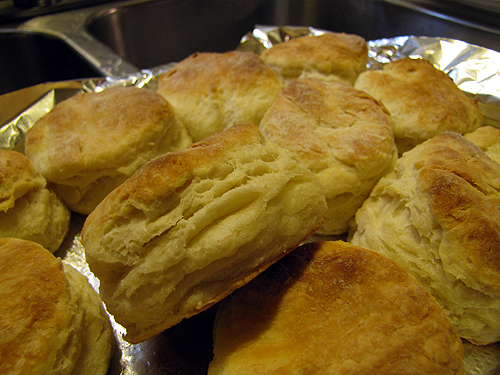 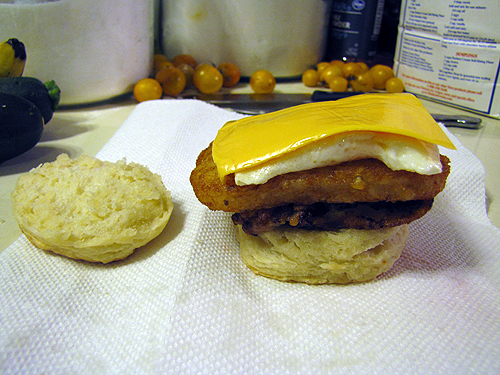 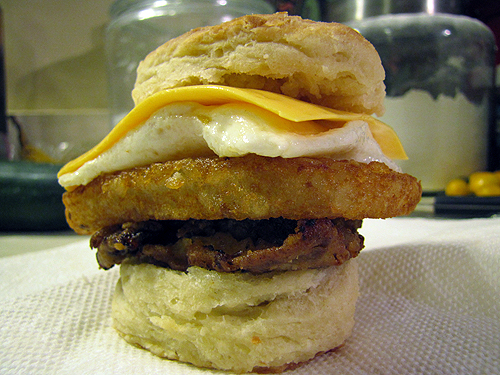 The first time I made this and wrapped it up for Rodney to take to work with him, he was barely down the road before he called to say, “It tastes just like a Rocket.” How he can eat a Rocket and drive at the same time, I don’t know. And even talk on the phone. Though he did say, “I’ll get off the phone now so I can get back to my Rocket.”

You can see all the biscuit sandwich combinations at the Tudor’s website here to get ideas. Most of them are simple to prepare and don’t require any explanation, but I’ll explain the Rocket. It’s round steak, cut in biscuit-size portions, soaked in milk then dredged in seasoned flour then fried. Whenever I make chicken-fried steak now, I make some extra pieces, pop them in a freezer bag, then I can make a Rocket very quickly in the morning by just reheating the steak in the oven for a few minutes while I’m frying the egg. I keep frozen hash brown patties on-hand, too. (Hey, it’s 5:30 to 6 a.m. when I’m fixing breakfast around here. I need some short-cut assistance.) If I’m using bacon or ham or sausage, I fry that up fresh, and I’m usually using biscuits leftover from the night before. I’m working my way through the Tudor’s menu, homemade. Then I’m opening a franchise. Just kidding. 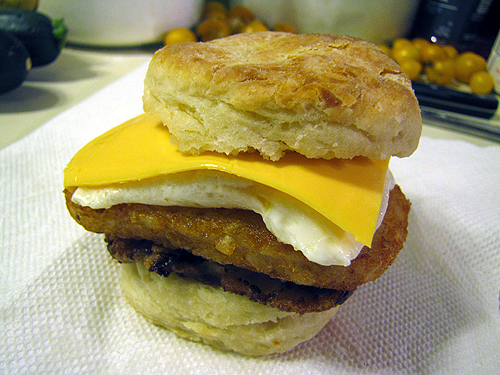