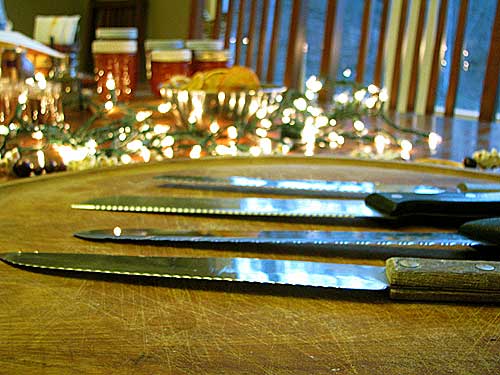 Yesterday, I got this nice yet despairing email:

I came across your site several months ago when I was trying to find out how to make bread. Later, I realized there was more to your site than just bread and now I’m a daily reader. Thank you for putting yourself out there. I’ve gleaned so much about everything I’m trying to learn…bread-making, canning, chickens, farming (not on a farm yet…but one day!).

Anyway, I haven’t bought bread for two months now. I make it all myself, but I’m still having a huge problem….cutting the bread. My husband said I needed a better knife so I got a better knife, but still no luck. I even froze it and then cut it partially thawed, trying to give me something sturdier to attack. I even have one of those bread cutter things to keep you in line, but I still either wind up with a clumped up mess or only about 6 “super” slices… On the upside, we have a lot of breakfast casserole with the mutilated remains. Can you make a post about making the perfect Grandmother Bread sandwich slices?

I can’t promise that I will always write a post in response to every emailed question, but look! Sometimes I do! Hey, cutting bread is a big deal!

Actually, making great sandwich slices is easy, but there is a knack to it. Around here, I cut the bread. No sooner do children head into the kitchen for a snack than I’m hearing, “Will you cut me some bread?” Maybe they’re lazy. Maybe they’re afraid I’ll yell at them if they mush up the bread. (I would never do that. WELL, MAYBE I HAVE A TIME OR TWO.) I do know it’s true that a lot of people have trouble cutting homemade bread because some of those people live in my house.

First of all, you need the right tool. A good bread knife has a serrated edge and is long enough to cut all the way across the loaf. No smooth knives. No short serrated knives. You want a nice, long serrated knife. 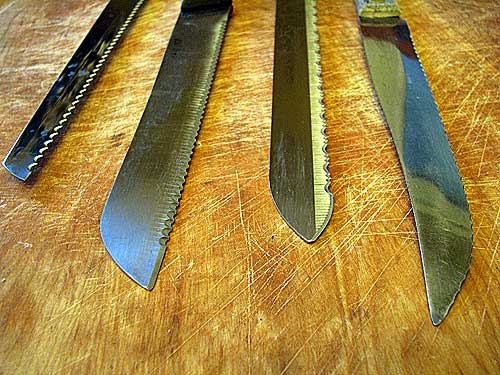 I have several bread knives. 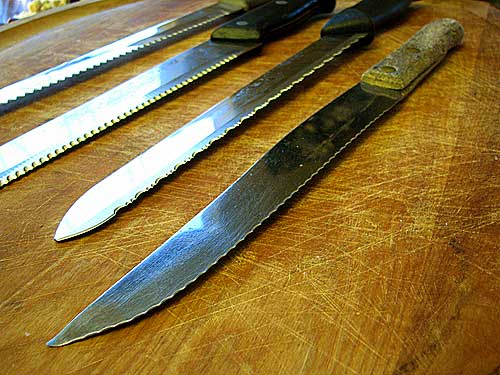 This one is a Pampered Chef bread knife. It was a gift from a friend. See the fancy, swirly serrated edge? 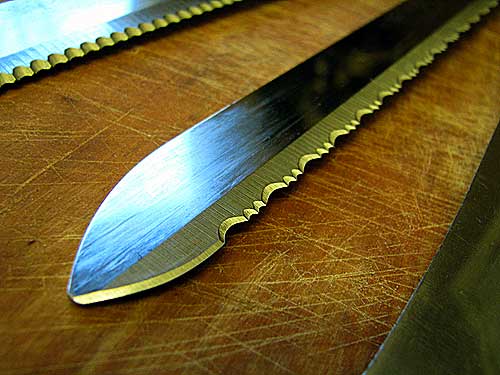 But this old homely one is my favorite. If the house was burning down, I’d take this bread knife with me.

I’m just kidding. But I’d be sorry later that I hadn’t remembered it in the midst of disaster. I like the feel of it. I like the wooden handle. The other bread knives work just fine, but I almost never use them. I’ve been using this bread knife for 20 years. And it was old then. I don’t remember where it came from, but I want to be buried with it. (I’M JUST KIDDING.)

Here are my bread-cutting tips. Don’t cut the bread hot unless you have to. And honestly, I often have to. I mean, have you had fresh bread right out of the oven with butter melting on top? 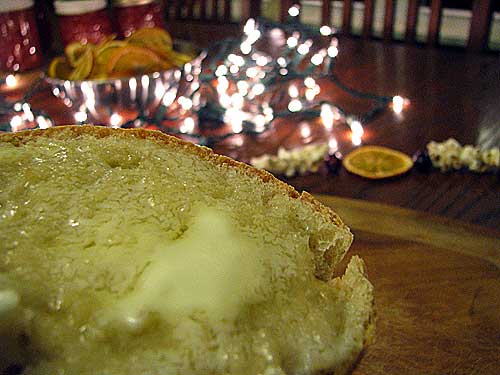 If I’m going to cut hot bread right out of the oven, I will sometimes just go ahead and use my bread knife to cut off a piece or two on the end, risking life and limb and loaf-mashing. 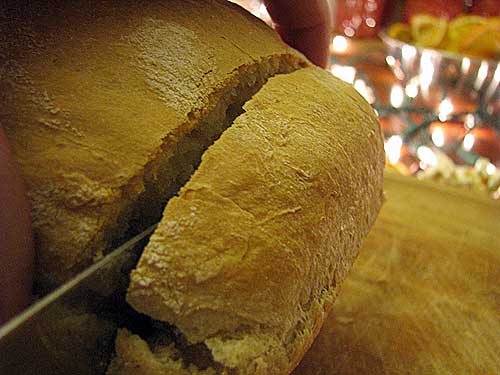 It’s important to not press down on hot bread. Go at it carefully, lightly, and you will still probably mush it a little on the end but not too badly if you work it just right. 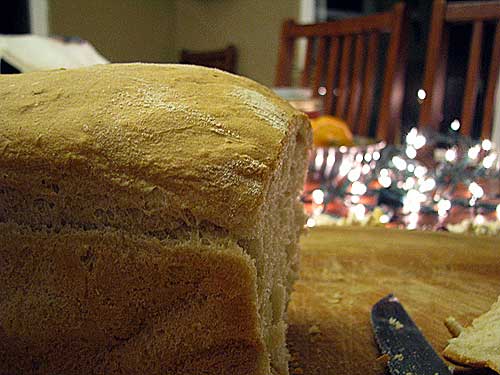 But don’t think about cutting the whole loaf that way when it’s hot. You’ll mash the whole thing. If you want to cut an entire loaf hot, get out the electric knife. 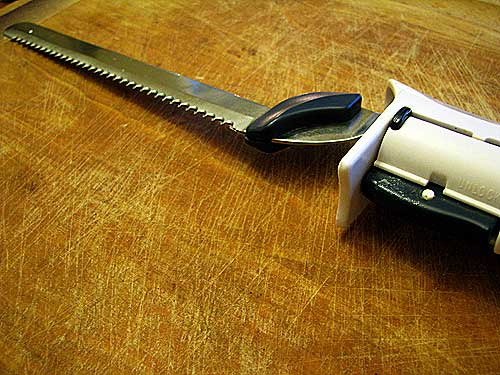 Mine is a Black & Decker. (It’s inexpensive–this one was about $10. It makes a great gift, by the way! It’s good for bread, meats, and lots of other things where you especially want thin or uniform slices. My mother bought this one for me.) 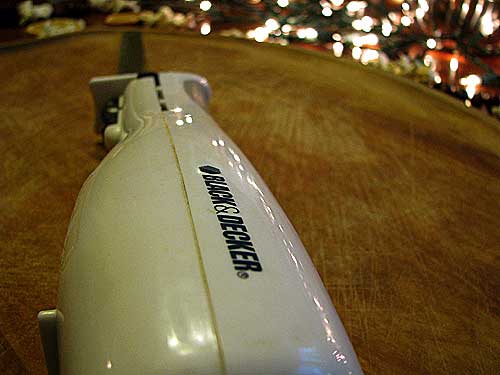 An electric knife not only allows you to cut hot bread without mashing it, you can also get very thin, even slices that are perfect for sandwiches. (With either hot or cooled bread, thin sandwich slices are most easily achieved with an electric knife.)

Cutting with an electric knife doesn’t require you to put any but the most minimal pressure on the loaf. I touch the loaf just enough to hold it steady in place, with my fingertips on the sides of the loaf and not touching the top of the loaf at all, and let the electric blades do the work. 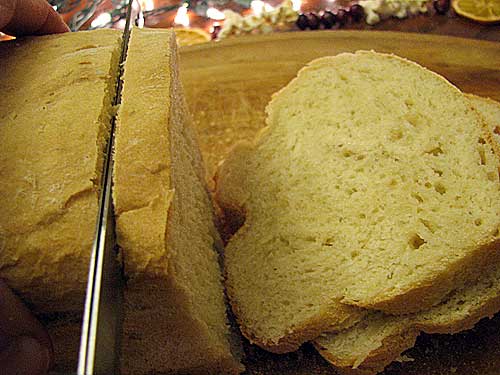 When you first start to make each slice, go at it a little bit from the side, not quite straight across the top. 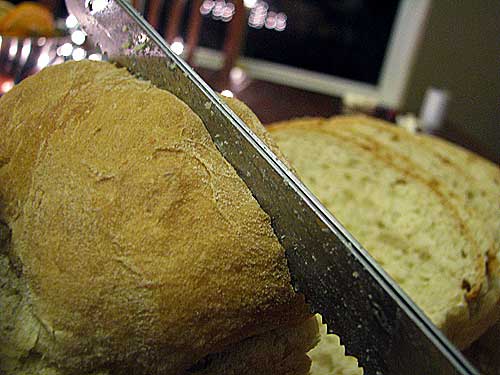 Once you get in there, then straighten up the knife and slice it straight down. 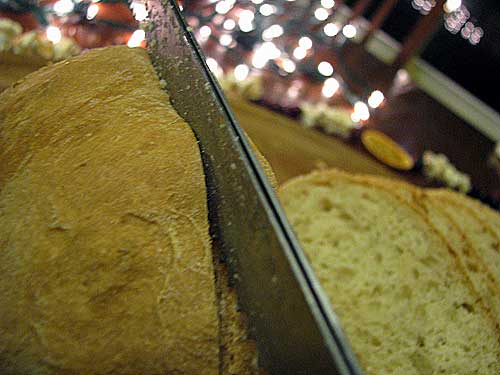 There’s nothing like an electric knife for perfect sandwich slices. 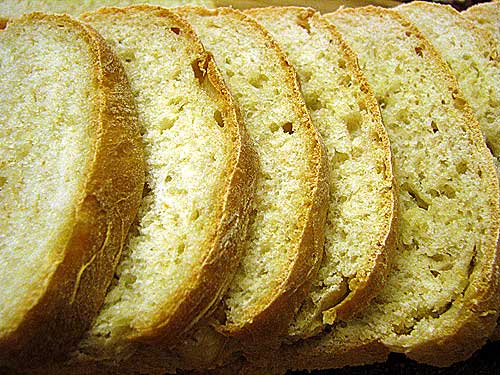 If I’m cutting bread for toast or for dinner slices, I just cut fat, lovely slices with my bread knife–after the loaf has cooled. I’ve never had trouble with mashing cooled bread while slicing. I cut cooled bread with a bread knife with the same technique I use with an electric knife. Put minimal pressure on the loaf, fingertips lightly on the sides, start in a little at an angle then straighten up to finish the slice.

Avoid ever placing your hand down on top of bread–hot or cooled–while slicing. That’s what children and men tend to do. They think they need to take control of the loaf as if it might escape and run away to the circus. The bread’s not going anywhere. It wants you to eat it. That’s what it’s here for. Be gentle. Be one with the bread. Be the bread. 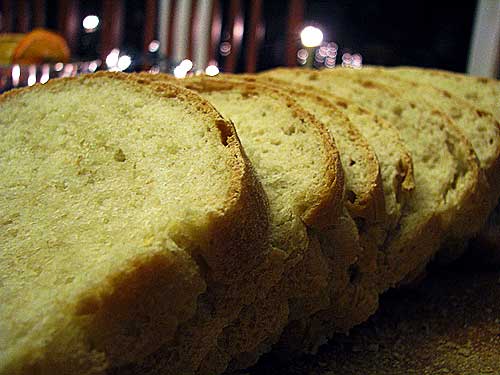