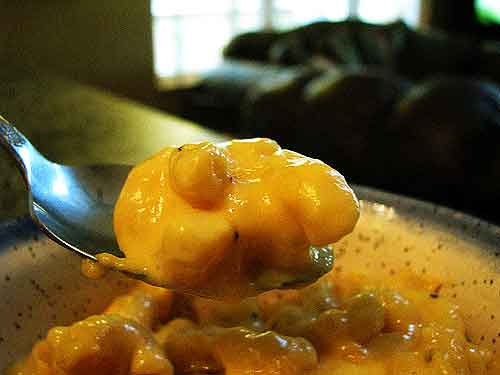 Simple, pure, unadulterated, cheesy. That’s kid-pleasin’ mac ‘n’ cheese, and so much better than anything you can get out of a box! Of course, kids have a weird thing about mac ‘n’ cheese from the box. They actually like it. But I can’t stand it when I see that powdered cheese come out of the little white packet and go into the pot. Powdered cheese is so gross! And so, years ago, with little children who loved their mac ‘n’ cheese, I went in search of the cheesiest homemade mac ‘n’ cheese that would not only fulfill the children’s plain and simple mac ‘n’ cheese dreams but also fit the bill for a fast dinner–which, after all, is what often drives us moms to open a box to start with.

I tried a lot of different cheeses. Hard cheeses take longer to melt (it’s easier to melt shredded cheese, so if you use a hard cheese, shred!) and I love mac ‘n’ cheese with flavored cheeses like garlic cheddar or pepper jack–but just try to get a four-year-old to eat that! They want that stuff from the box!

And so eventually I turned to Velveeta, which is a processed cheese, but at least it doesn’t come powdered in a little white packet. And hey, it has a third less fat than cheddar! Says so right on the box! But whatever. Kids love Velveeta! 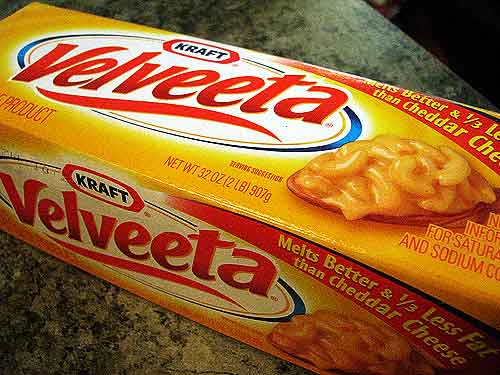 ….is heaven on a plate whether a kid is four or fourteen. (Or maybe even forty or eighty.)

And so I put my garlic cheddar mac ‘n’ cheese dreams aside, along with that box of powdered cheese. I also set aside my fantasies of adding chopped onions and peppers or other vegetables, or even ground beef or ham or chicken or– Or anything!

Because that’s not what kids want.

Kids want that stuff from the box!

But here’s how to make it better (and almost as fast!), with simple-to-keep-on-hand ingredients for those last-minute desperate-dinner nights.

Printer-Friendly
How to make the Cheesiest Macaroni & Cheese:

(Recipe easily doubles, triples, and so on.)

Preheat oven to 350-degrees. Boil the macaroni while you prepare the cheese sauce. For cheese sauce, melt butter in a large saucepan on medium heat. (If you don’t have children to upset, this is the point where you’d want to add chopped onions, peppers, etc, to saute in the butter.) 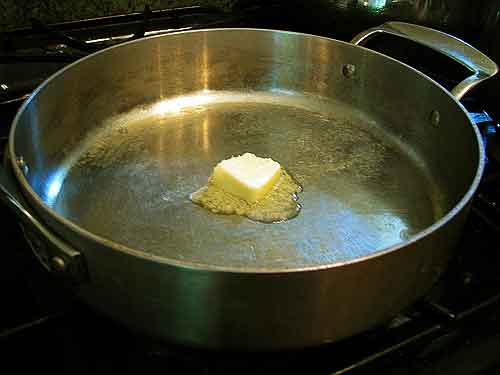 Add one tablespoon flour and a dash of pepper to the melted butter. (Only a dash! Do not upset the children!) 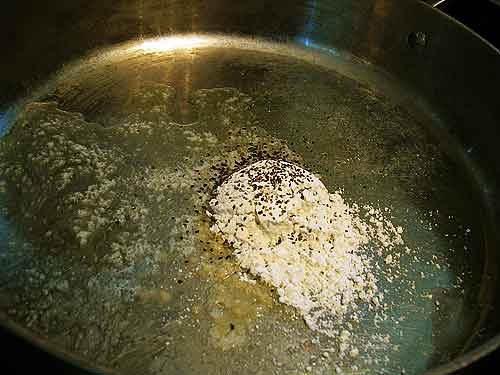 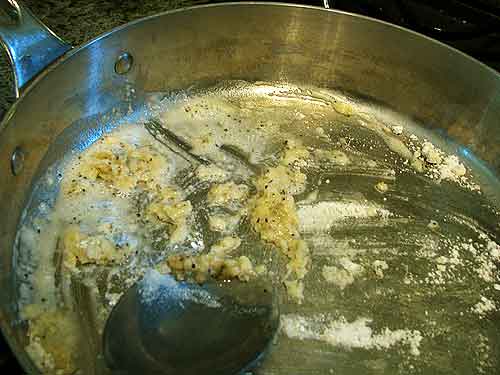 Add milk all at once, stirring on medium heat until the flour and butter dissolve into the milk and the entire mixture thickens and starts to bubble. 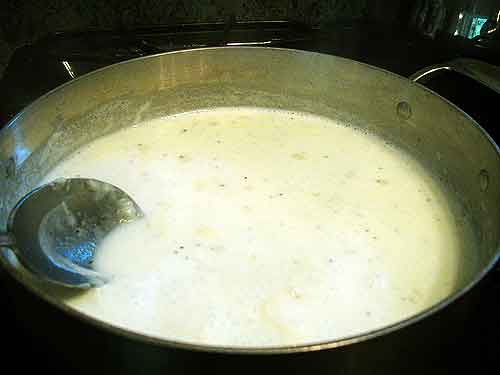 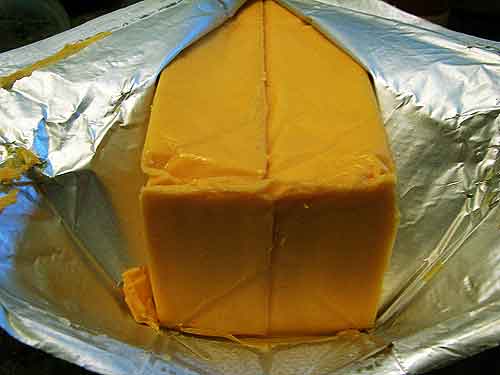 A box of Velveeta is 32 ounces, so cut off one-quarter of the Velveeta hunk. If you don’t cut the exact amount, don’t worry about it. Especially if you happen to cut a little more. Kids love more. (If you’re using a hard cheese, 8 ounces is about two cups shredded cheese, or if you want to cut up the Velveeta, this would also be approximately two cups cubed Velveeta–but don’t get stuck on being precise. Just cut off a big hunk that is about a quarter of the Velveeta.) 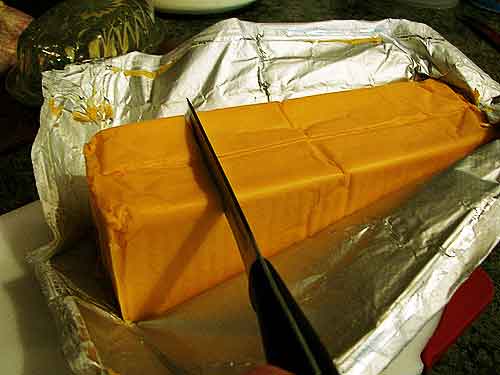 I don’t take the time to cube it. I just cut it up roughly and drop it right in the pan. Velveeta melts easily and quickly. 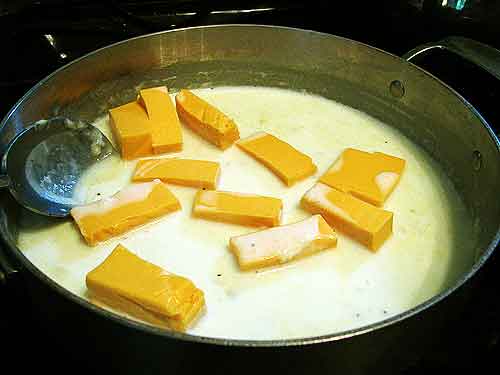 What the heck, cut off another thick slice and stick that in there, too. We’re going for cheesy here! 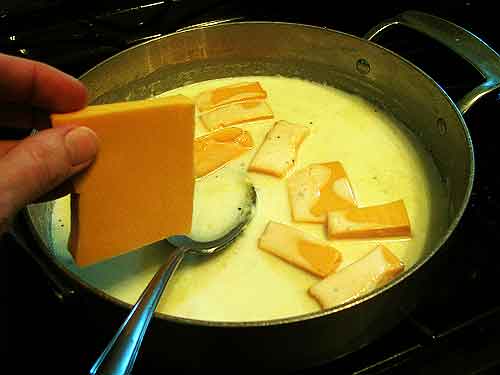 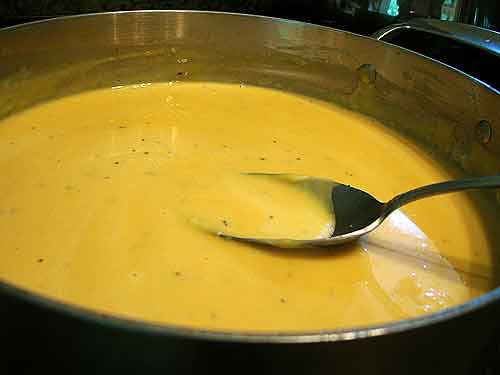 Spoon in the cooked, drained macaroni. (If you’re adding cooked ground beef or other meat, mix in along with the macaroni.) 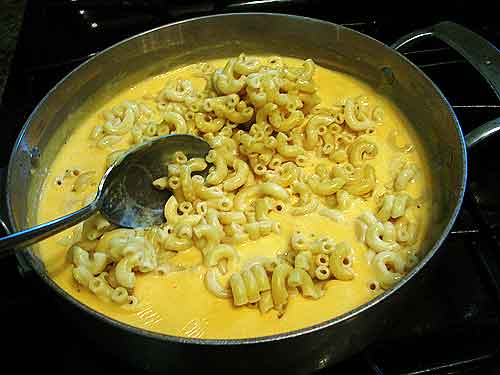 Transfer to a greased casserole dish. Entire prep time (not counting baking) is about 20 minutes. Including baking time, you can walk in the door and have this on the table in 45 minutes. Not bad in comparison to using a box mix, and it’s so much better. 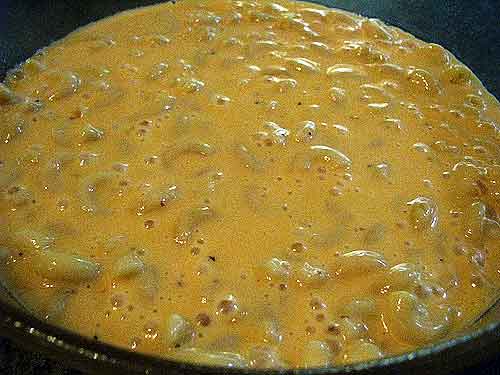 Don’t you think we should decorate the top with homegrown sliced tomatoes? Then we could add another dash of pepper and a sprinkling of chives– 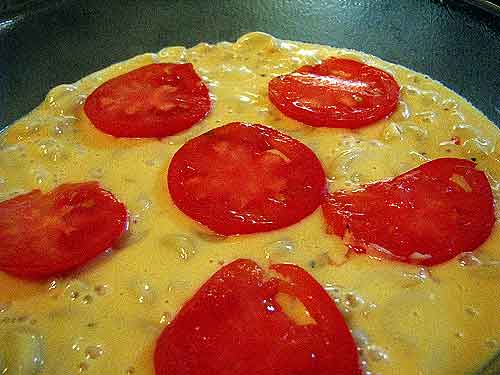 STOP THAT! Are you TRYING to upset the children? Do you want the entire house to explode from this untenable adulteration of mac ‘n’ cheese in its pure cheesy goodness?! 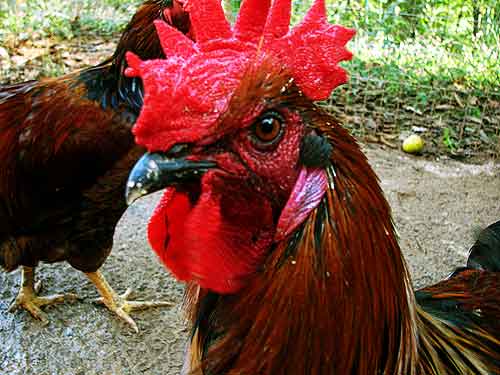 (I don’t know where he came from. I think the children sent him when they heard me talking about putting tomatoes on top of their mac ‘n’ cheese.)

The natural order of the universe has been restored. 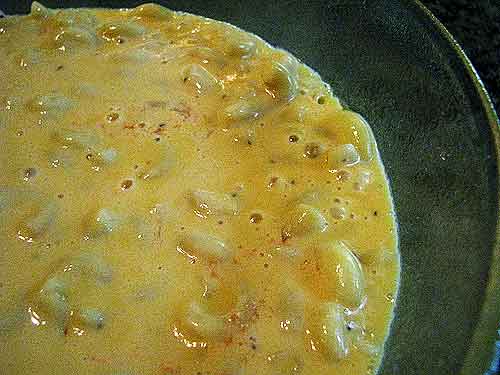 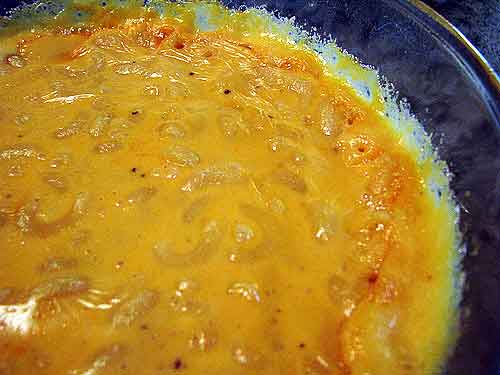 (Double the recipe if you expect to get any. And if you don’t have kids, have some garlic cheddar mac ‘n’ cheese for me. With bow-tie pasta instead of elbow macaroni. And some sauteed shiitake mushrooms.)