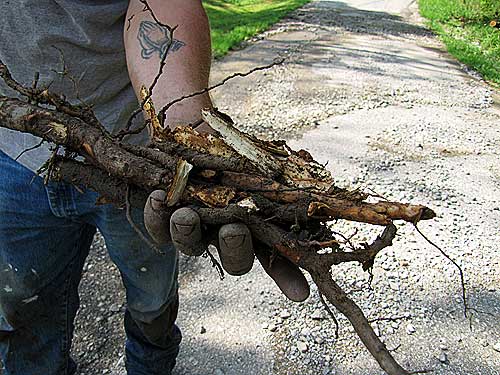 My farm is covered in sassafras trees. Sassafras trees are native to the United, from the mid-west to the east coast, and from Florida to Ontario. They’re usually found in open woods and along fences or in fields. Sassafras is an aromatic tree whose roots and root bark can be used to fragrance soap and make tea and root beer. It’s called the root beer tree (and when you smell the roots, they smell like root beer)–but sassafras was banned for use in root beer in 1960 because it contains safrole, which was found to cause cancer and liver damage in laboratory animals. Sassafras tea was eventually returned to the market, but root beer had already moved on without sassafras–except for home brewers.

The Spanish believed sassafras to be a cure-all beverage, and a lot of people in the country still drink it every day and swear by it.

I asked Adam to dig me some sassafras roots. This is Sassafras Farm, after all. It’s time for me to be one with my sassafras.

When I moved here, I was told by the previous owners that there was sassafras on the hill, along the upper pasture. Turns out, there’s a lot more sassafras than that. It’s across the road–along the road and up the hill. It’s along the fence to the side of the studio. Yes, it’s up the hill along the upper pasture, but it’s also across the ravine and going up to the ridge. It is, in fact, everywhere. This is, indeed, a sassafras farm. Big trees, small trees, and everything in between. I have so much sassafras here, I could go into business harvesting and selling roots. (Uhhhhh….. There’s a time issue there.)

In any case, I felt super silly for buying a sassafras tree to place in the yard by the gate. Which is, by the way, the only tree I planted this year that died. That’ll learn me. I’m pretty sure I will not replace it.

Adam told me that one of my sassafras trees along the fence by the studio is one of the biggest sassafras trees he’s seen in this county. I set him to digging sassafras roots and teaching me to make the tea. 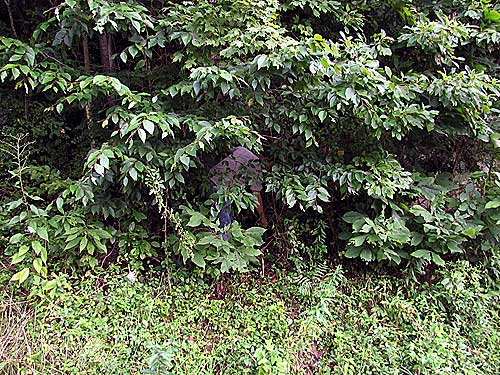 The best time to dig sassafras roots is actually in the winter, when the sap is down in the roots. This time of year, the sap is running up the tree. Spring, summer, and fall, you’ll need more roots to make tea than you will in the winter when the sap in the roots will be stronger. It’s fine to dig them any time if you have a hankering for tea or root beer, but if you want to harvest seriously to save the roots for later use over the year, wait till winter. Just be sure you know which trees are sassafras trees. (Though if you dig up the wrong trees, you’ll know by the aroma test.) Saplings are easiest to dig (and plentiful), but you can cut small side roots from larger trees if you’re careful and not kill the tree.

Sassafras trees have three types of leaves on the same tree. 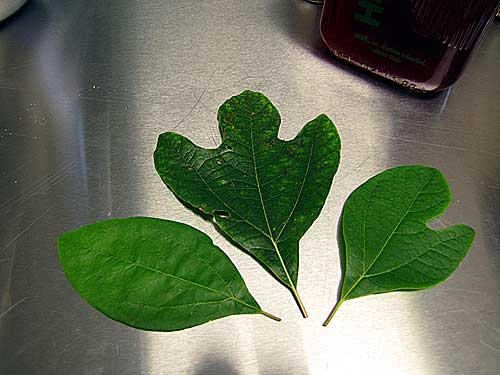 If you want to dig them in the winter (when there are no leaves to help you), you can mark the trees. (Paint, tags, ribbons, etc.)

Scrub the roots with a brush to clean them. 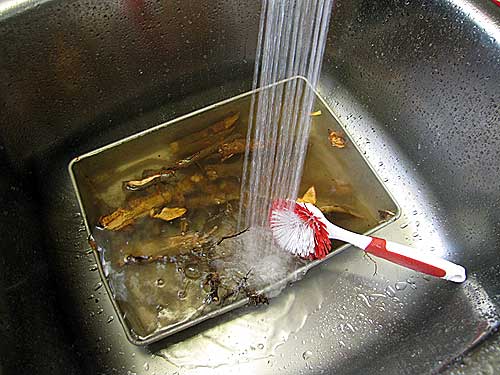 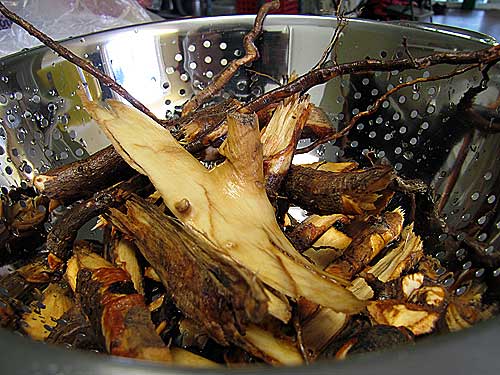 Cut the roots up into smaller pieces to release more aroma and flavor. For this amount of roots, about enough to cover the bottom of a big pot, add a gallon of water. Bring to a boil then simmer until the tea darkens. You can make the tea as strong or weak as you like, so this part is up to individual preference.

I simmered mine until I had a nice rich red tea, which I filtered using the same filters I use to handle milk. 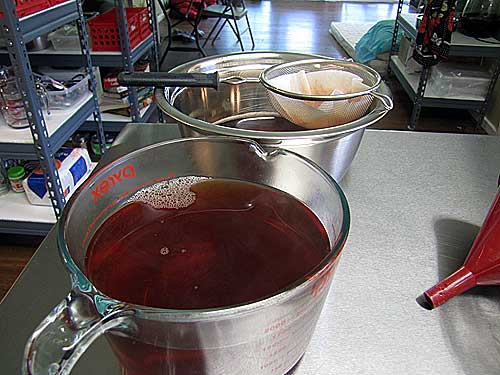 I ended up with 3/4 gallon of sassafras tea. 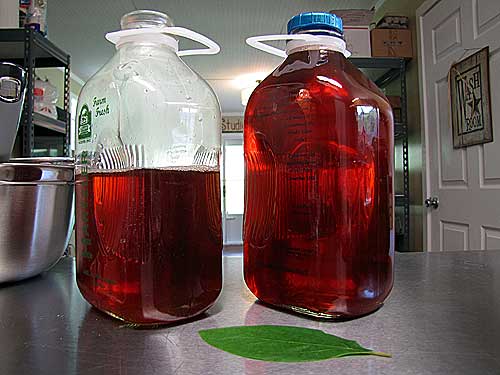 I used some of the tea to make sassafras tea soap with honey and pine resin. (I have my soap up on my Farm Store page here.)

This is the natural color of the soap made with sassafras tea. The reddish tea turned into purplish soap. 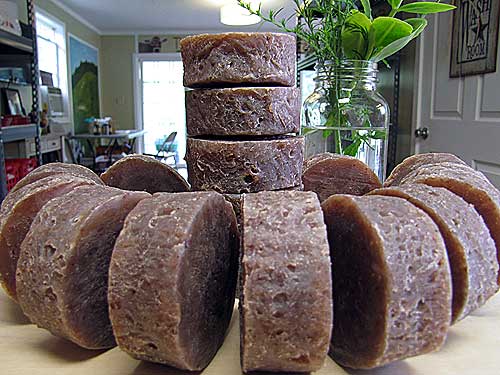 The rest of the tea was for drinking. But I didn’t stop there. Oh, no, I wanted to make homemade root beer next!

So I made Adam go get me some more sassafras roots. 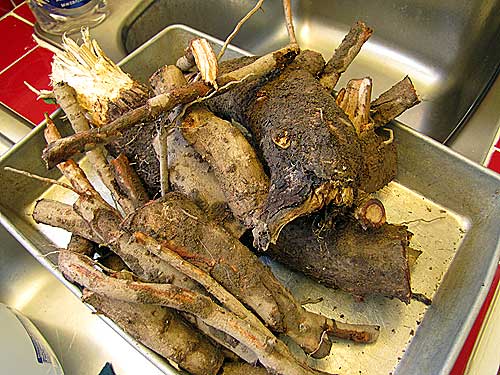 I have real sassafras, neener-neener.

Root beer manufacturers make root beer by their own individual recipes, based on the above ingredients, and so should we. I’ll tell you how I made mine, but you can make your own, your way. Traditional root beer is fermented, which is where the “beer” comes from. Home brewing was a staple in many households in the past, and home brewers still make fermented root beer today, but there is also a simple non-fermented method that has been crafted for years in country households.

Note that most of the following measurements aren’t that specific. It’s really not necessary–if your concoction isn’t strong enough, simmer it longer to concentrate the flavor. Like the tea, root beer is very individual. Taste test until you like it, and make it as strong or weak as you like. What follows are general directions.

Start with enough sassafras roots to generously cover the bottom of a large pot. I had more sassafras than I had the first time, so I started with a gallon and a half of water to cover the roots. Based on the ingredients above, I added about a half dozen cinnamon sticks along with a half cup of a mixture of anise, whole allspice, and whole cloves. I simmered the mixture until it concentrated to a dark tea. (You could also make a spiced sassafras tea and stop right here!) When the tea looked right (dark enough), I filtered it then placed it back in the pot. I added about a pint of molasses, brought the mixture back to a boil, and simmered for 15 minutes. Then I experimented with sugar until it felt “right”–adding four cups of sugar, simmering to dissolve. The sugar is to taste, so use this as a guideline. Combine some of your syrup with club soda and taste test till you like it. Simmering with this much sugar makes the spiced sassafras-molasses tea into a syrup. This is far too sweet to drink as a tea now–but you’re not going to!

Chill the syrup then transfer to bottles. I ended up with almost a gallon of “root beer” syrup. 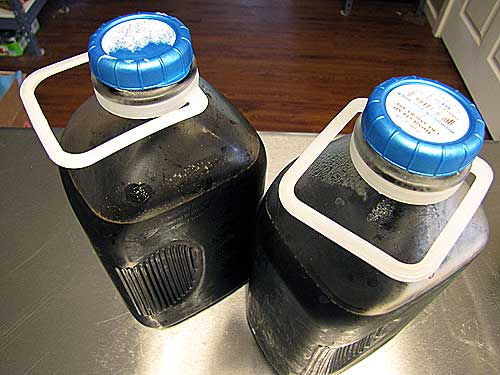 Keep refrigerated. To serve, pour equal parts root beer syrup and club soda over ice. Now you have root beer! Note: Root beer from the store is strong and very sweet. If you like it that way, you may want to adjust the 1:1 ratio. Taste test small amounts until you decide what you like. You can also throw in a splash of rum. 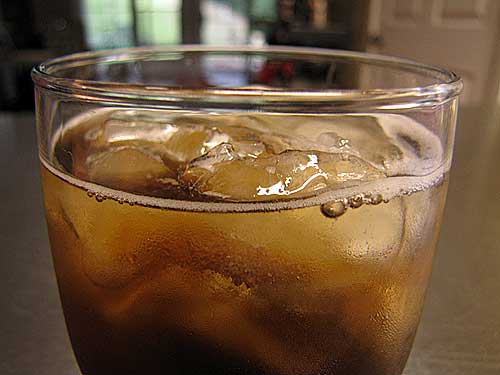