WARNING: This post includes photos of hanging meat, and meat being cut up inside a butcher shop. (NOT slaughter photos, I promise.)

The chosen one, on the left: 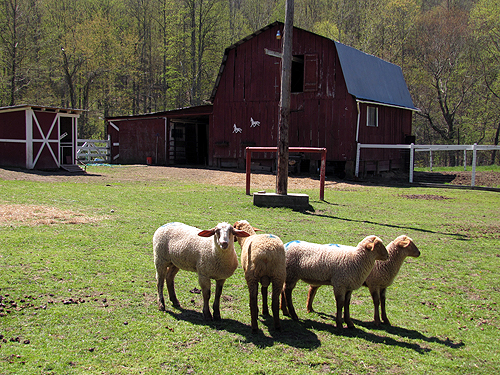 Monday morning, I got home with four sheep in the back of my Explorer, unloaded them successfully into the barn yard, took a shower to clean myself up, and called the butcher. I should have called the butcher before I unloaded all four and cleaned up.

“We’re doing sheep today,” the man said. “Can you have it here before seven?”

“I’ll have it there in an hour!” I said, and went right back outside to re-load the chosen one. Which wasn’t easy. But luckily Ross was here.

I arrived at the butcher shop and felt slightly confused as the place looked deserted. I’d never been to this butcher before. Previously, I’d used a butcher in Milton, but hadn’t been that happy with them the last time, so was trying a butcher in Ripley. (For those of you who are around here…. The butcher shop in Ripley I went to was Wolfe’s.) I finally found a man in one of the buildings and told him I was the one who called a little while earlier about bringing a sheep.

“I thought you said beef.”

“I have a sheep in the back of my Explorer!”

He must have felt sorry for me because I had a sheep in the back of my Explorer because he said he’d go ahead and take it. If you’ve never taken an animal to a butcher before, this is the worst part coming up here. You have to unload the animal–and you know when you see it again, it’s going to be packaged up in parts. The first time I took an animal to the butcher, it was quite difficult. I could hardly stand looking in their eyes. It does get easier, that’s all I can say. I didn’t know this sheep very well, having only spent a few hours with it before taking it to the butcher, which was a good thing.

I backed my Explorer up to the ramp leading to a door that opened to an area with holding pens. Since I’d failed to put a rope or halter on the sheep, I had to get him out the hard way. I didn’t want to climb into the back of the Explorer because I’d just transported four sheep in it and hadn’t cleaned it up yet. I reached in, grabbed the sheep by both ears, and started a tug of war that had the sheep halfway pulling me into the Explorer against my will. While the man just stood there.

Eventually, he said, “You want some help?”

With his help, I finally got the sheep outta there, pulled headlong through the door. A pat on the rump had him moving inside and the man directed him into a pen. Then, maybe because he already thought I was a nut job, he surprised me by asking me if I wanted to come watch the butchering. Really? Watch them cut it up? 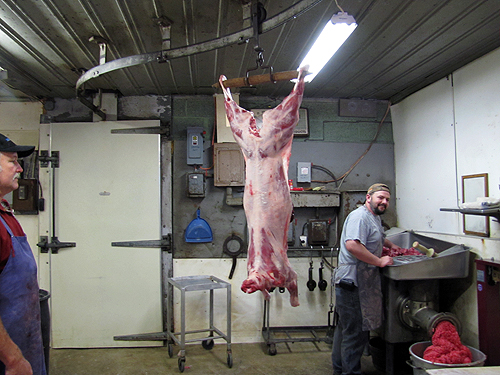 Thursday, I was back in Ripley watching a team of people do the job in about 15 minutes flat. They were finishing packing up a cow when I arrived. When they saw me, they said they’d do my sheep next and brought him out hanging. 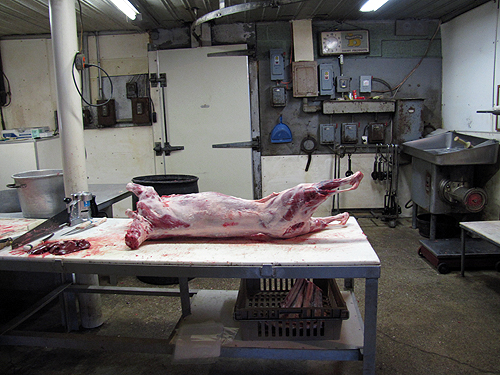 A sheep is butchered pretty much like a deer, for those of you to whom that means something. 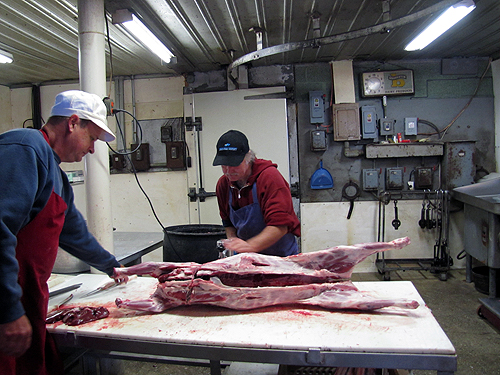 There were at least half a dozen people working on the process. 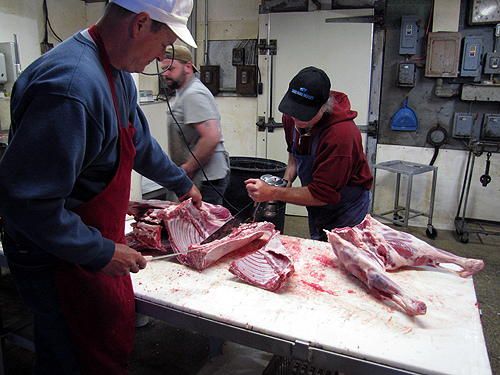 One made the major cuts to get the sheep worked up while others took what was to be ground, another was slicing chops, others dividing roasts and then there were packers. 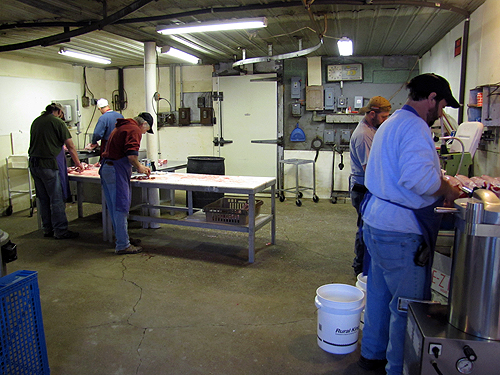 It was interesting to see what quick work they made of the meat, and I really liked standing right there observing the process and directing the cuts and the packing. 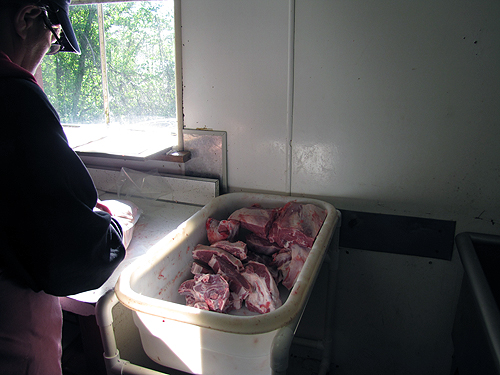 (What size roasts. How thick to make the chops. How many chops per package. Etc.) I’ve never had a butcher shop give me the option of being there when the butchering was done, and I would definitely do it again for that control over the outcome. 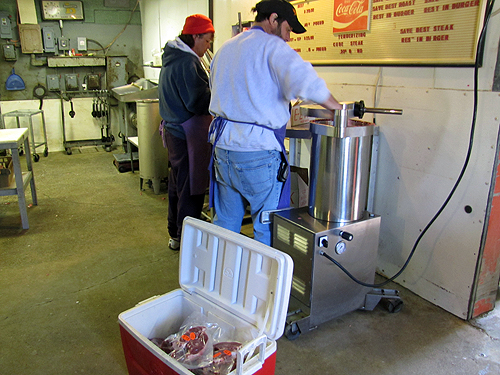 FYI, I paid a total of $53 to have this done, which is pretty cheap. As they were finishing up, I brought in my cooler with ice and the packages were loaded in. 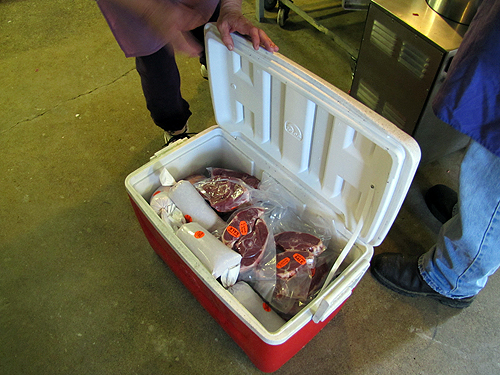 They carried the cooler back to my Explorer for me. On the downside, I was warned when I brought the sheep that they do not dispose of the “waste” on sheep. The head and hide were bagged up in a trash bag and loaded into the back of my Explorer. I KNOW.

Don’t ask what I did with these remains. I know how to git-r-done.

I did think that was weird.

Somebody’s going to ask how much meat I came away with from this sheep. I don’t know. I didn’t ask them what the hanging weight was, or even know if they weighed it. The sheep was originally probably around 80 pounds, so something less than that, of course. The way I had it cut, I ended up with around six roasts (including leg of lamb cuts), maybe around 6 pounds of ground, about 10 thick chops, a rack of country ribs, and some meaty stew bones. (I’m going on memory from when I unloaded the cooler, and may be leaving something out.)

Raising livestock for food is a self-sustainable and traditional farming practice. In the past, it’s something farmers didn’t think about twice. Today, many of us in farming didn’t grow up on farms and it can be one of the more difficult aspects of caring for livestock. I understand that for some people, it’s a bridge too far. They’d rather raise and sell the offspring than use them for their own meat. I didn’t actually raise this sheep myself, but one of the main reasons I’m acquiring more sheep is so I can raise my own meat.

I wasn’t sure when I started farming if it was something I could do, but I have butchered animals that were born and raised on my own farm now, and it’s something I have come to feel good about doing. I’m not a vegetarian. I eat meat. A farm means I have the opportunity to raise my own. An animal raised on a family farm has a good life—-and one bad day, which is more than one can say for animals in most factory or mass agri-operations where meat from the grocery store originates.

Livestock on family farms live natural lives on green grass in the fresh air with petting and, around here, cookies. This isn’t anonymous meat wrapped in plastic on a foam tray. Having raised my own meat, I have found myself feeling differently about how I cook and how I eat. Eliminating waste by portioning carefully becomes more important. To scrape meat off a plate to the dog bowl or in the trash seems almost criminal. I have a respect for my food that I didn’t have before. Animals I raise to butcher sustain my family with their bodies, and I feel an obligation to honor that in the meals I prepare and how I treat those meals. We’re often so nonchalant as a society about tossing leftovers. When we grow our own food, and raise our own meat, it changes how our minds work. 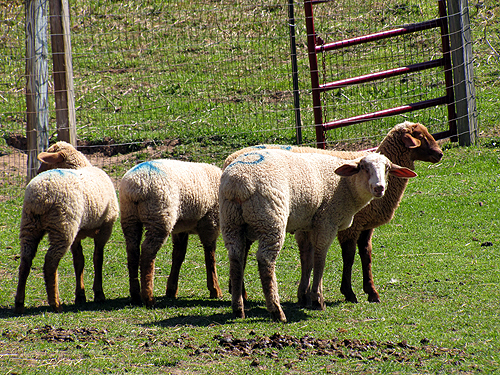 I look into the eyes of meat I put on my plate. It’s a connection to my food, and a responsibility to it, that to me feels right and honest and real.

All the way to the butcher shop.